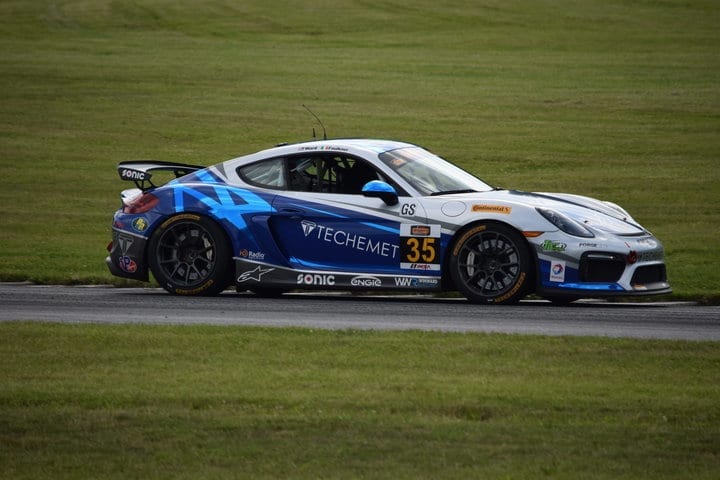 On Wednesday, Winward Racing announced that they have joined forces with Blancpain GT Series regulars HTP Motorsport to field two Mercedes-AMG GT4s in the IMSA Continental Tire SportsCar Challenge in 2018.  Russell Ward and Damien Faulkner, who shared the No. 35 Porsche pictured above for CJ Wilson Racing this year, will drive one of the cars.

The new Mercedes-AMG GT4 has not raced in the United States as of yet.  The Winward Racing/HTP Motorsport program has entered one car in the upcoming 24H COTA in November.  For that race, Faulkner and Ward will be joined by Maximilian Götz and Indy Dontje.  Note that the 24H COTA is sanctioned by Creventic and is not tied into IMSA in any way.  In December, the team will race in the 25 Hours of Thunderhill out in California.  For that race, former Formula One racer and DTM champion Bernd Schneider will join the driver lineup.

For Faulkner, he’s looking forward to the new deal.

“The partnership is extremely exciting. Having raced with HTP in Europe this year, I got to experience not only how great a team it is, but also the brilliant product that Mercedes AMG produces,” Faulkner stated.  “The opportunity to do two, twice-round-the-clock events in the all new AMG GT4 in the “off season” should be a value of immeasurable proportion for Winward. It should allow us to hit the ground sprinting at Daytona in January when our 2018 season begins.”

There is no word on who will drive the second Mercedes-AMG GT4.  However, Team Principal Bryce Ward notes some potential for that second seat.

“HTP Motorsport is the best in the business in Europe. We will draw on its experience, helping us to us to further develop as a championship contending team,” Bryce Ward stated.  “The Winward/HTP agreement will open up opportunities for European drivers in US events and it could also give US drivers the opportunity to compete in Europe under the Winward/HTP banner.”

For 2017, HTP Motorsport lists 15 drivers that competed for them in various series.  As noted above, Faulkner is one of them.  So is part-time IMSA WeatherTech SportsCar Championship driver Mike Skeen.  They also include Schneider, former Verizon IndyCar Series driver Franck Perera and a number of stars in the Blancpain GT Series such as Maximilian Buhk.  Under current IMSA rules, both Buhk and Götz are ineligible to compete in CTSC because they are platinum-rated drivers.  However, the other 13 drivers are either gold or silver-rated.  As a result, they would be eligible to race.

This GT4 stuff is right off the rails. In addition to McLaren, we now have MB/AMG dumbing down a GT3 car to sleaze in a few wins in GT4 events. Then there’s the limited volume cars like the Ginetta, Xbox, SIN and so forth. Just stupidity to allow this nonsense of cars crossing between classes.

This class should not be about supercars, we’ve already got them in GT3, GTD and GTLM, this should be about cars that the average Joe could actually afford to drive on the street. These clots in the sanctioning bodies have their heads thoroughly up their arses with this stupidity. No wonder interest and entries are down from the heydays not that long ago.

In the case of the McLaren, their GT4 entry is based on a completely different car, the 570S, as opposed to the 650S used for their GT3 car. However, I do agree about the GT3-based cars that Mercedes and Audi are pushing into the GT4 category for 2018. They’re not cheap cars ($200,000 + for a car), but they’re cheaper than what’s being charged for a Chevrolet Camaro GT4.R (~$259,000). My understanding is that the cost to race in Grand Sport now with GT4 cars is about the same as it was with the older cars because the build costs are almost nil. Having said that, it is not cheap by any means. GT3 cars cost anywhere between 400 and 590 grand each (the Ferrari 488 GT3 is the most expensive, as far as I know).

Cars like the KTM XBow GT4, the Ginetta G55 GT4 and (I guess) the SIN R1 GT4 are quite a bit cheaper to acquire. However, they’re ineligible to compete in the CTSC because they’re not from “mainstream manufacturers.” I personally don’t like that rule. I’d rather that Grand Sport be open to anything that meets the specs.