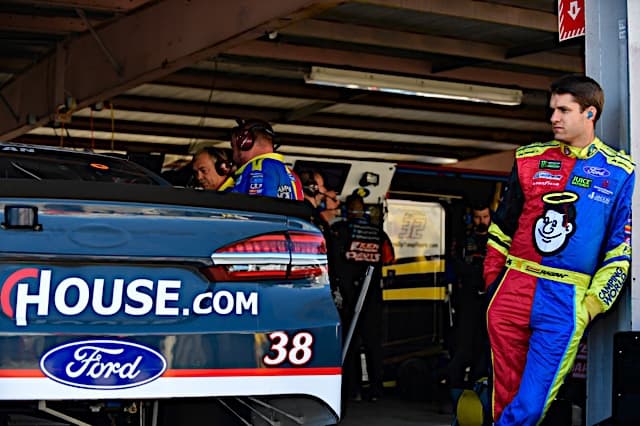 Who Could Be a Surprise Cup Winner on Sunday?

NASCAR’s Talladega week is where it gets fun for us writers. We get to publish our outlandish, bold winners who we predict may make us look like geniuses for once in our nine-month season.

In this week’s Frontstretch Podcast powered by DraftKings, we added a little new twist to the weekend predictions: feel-good picks. We had fun, and at the end of the day, it’s Talladega, they could actually happen.

For Sunday’s Alabama 500, there are five drivers who are on my list of potential surprise winners/contender up front. Some are out there, some are actually reasonable.

The first may be the latter in Aric Almirola. This guy scored his second plate win in the XFINITY Series in May when he won at Talladega. But even on the Cup side, his numbers have been impressive, finishing fourth in the last two plate races he’s ran in 2017.

Additionally, Almirola has finished 15th or better in eight of the last 10 plate races, a stunning statistic considering the random brutality of these tracks.

Next is Michael McDowell. This guy finally grabbed a top-five finish in his Cup career last time at Daytona in July, finishing fourth for Levine Family Racing. Though his best Talladega finish is 15th from 2013, Daytona has shown us that potential for a breakthrough — four straight top 15s and four top 10s in the last eight races.

In a time of uncertainty for 2018, a win now would be pivotal in his future in NASCAR.

Next is that other guy who almost won in July at Daytona, David Ragan. In the Land of If’s, Ragan would have grabbed his third career Cup win that night if he guarded the inside lane with two laps to go. However, in this land, we go off what happened and that was a sixth-place night for Ragan.

Will he return with similar speed and a lesson learned? His teammate Landon Cassill feels the pain from both Ragan and McDowell, as he’s lost out on plate wins and also sits in the unknown water for 2018, not returning to Front Row Motorsports.

Cassill, who also approaches his final realistic shot at a win, scored his best Cup result in this race three years ago, finishing fourth.

Last and certainly not least is Brendan Gaughan, the XFINITY veteran who makes his fourth appearance in the one-car Beard Motorsports Chevrolet. Shocking the stat junkies in February when he finished 11th in the Daytona 500, the team’s first race, he bested that result by finishing seventh at Daytona in July. That night, he ran top three at one point before being shoved into the wall in Turn 1, later pointing out the lack of drafting help to the reason he didn’t stick up front longer. Still, he rallied for a top 10.

If that ECR motor can’t produce a win, there are many others who can and will be waiting in line — literally — to score that special victory. It could be their last chance.

Will Talladega Be More Special Than Homestead for Dale Earnhardt Jr.?

I’m sure the leadup to Dale Earnhardt Jr.’s final Monster Energy NASCAR Cup Series race at Homestead-Miami Speedway will be special, but this week has seemed surreal.

Approaching his final race at Talladega Superspeedway, Junior Nation and the entire sport will marvel in the excitement of having his name mentioned in the expected winners. To be frank, with how 2017 has gone 30 races in, this Sunday is the last time he will be in a position of “Hey, Dale can definitely win this weekend.”

Perhaps you could throw Martinsville into that group — his last full non-plate race win did come there in 2014. But for the most part, the Alabama 500 is his shot at Victory Lane once more.

Will Sunday be more special than Homestead? Obviously, the Earnhardt name ahs a far deeper bond to ‘Dega than to Homestead, a track that joined the circuit in 1999. And the specialty of his last race coming at Homestead is simply down to the fact that Homestead is race No. 36 of a 36-race season.

Thinking back to Jeff Gordon, instead of his last race in 2016, you, instead, think about his last “big” moments: his Championship 4 race at Homestead or his last victory at Martinsville in 2015. Tony Stewart, perhaps his final race win last June opposed to his final actual start.

Unless it’s a wicked Carl Edwards moment, Dale Jr. could very well be the same.

This weekend is where the sport’s most popular driver hits the track he and his father made famous, as they scored 16 wins between them. In fact, Sunday will mark 17 years to the day of Dale Earnhardt Sr.’s final win at Dega in 2000.

So much success, this racetrack is simply synonymous with Earnhardt.

Though it’s likely we will see Dale’s nephew Jeffrey Earnhardt continue to compete at the 2.66-mile track — he was the only Earnhardt in the field in the fall 2016 race — a true, raw, natural bond between driver and track will come to an end Sunday afternoon.

What will we make of it come retirement? It could take some time to sink in.

Can The Truck Series Produce A Surprise Winner Saturday?

Before the Cup race goes green Sunday, the Camping World Truck Series has plenty to race for Saturday in the Fred’s 250. Not only is it an elimination race — which we’ll discuss later — but it’s also one last day for many small teams to make it big for a weekend in their struggling seasons.

First is Regan Smith, the ex-Cup driver who returned to the series at Daytona in February to finish sixth. Ending a nine-year hiatus that night, Smith drove through — and under — the big wreck on the last lap that saw Matt Crafton get airborne to score the solid result for 2017. Since, Smith and the Ricky Benton Racing Ford has made baby steps, finishing worse than 14th only once in eight starts.

But plate racing has been a happy place for that No. 92 team, who contended for the race win at Daytona in 2016, finishing third. And who was behind the wheel then? Our next pick, Parker Kligerman.

Now this has been a neat small-driver-small-team combo to watch in 2017. Kligerman paired with Henderson Motorsports for a part-time schedule this year and has out-performed the truck’s past nearly every week, finishing top 10 in four of six starts this year.

But the team has yet to have a shot at a plate track recently, with the No. 75 entry not racing on one since 2014 at Daytona.

Last on the list is the guy who dazzled the series at Eldora this summer, Stewart Friesen. Ever since the No. 52 team returned with the GMS Racing alliance, performance has significantly improved, finishing second from pole at Eldora, fifth at New Hampshire. two 12ths and a 13th.

Crashing out at Daytona in the first-lap big one in February, Friesen has yet to have that shot at a plate track in his improved truck.

Now, the fun is over. Down to business, people.

This weekend is the biggest of the season for two teams who will be eliminated from the Truck Series playoffs after 94 laps at Talladega. Those two teams are not Ben Rhodes and Christopher Bell, who won the first two races of the Round of 8, securing their spots for the Round of 6.

Though they’re not in question, Kaz Grala and John Hunter Nemechek are well in the red area of those biting fingernails. For Grala, two finishes of 10th and fifth, though consistent, have put the rookie below the cutline, eight points back of sixth-place Austin Cindric.

Nemechek, who has battled massive inconsistency all season — scoring seven top fives, yet, eight finishes worse than 20th — is also in the trouble zone, 14 points behind.

Are these two doomed from advancement or do they stand a shot at winning or pointing their way in? Well, if we’re talking plate racers, Kaz Grala is the first name on the board. He won the Daytona race in February from pole… his first time at Daytona. Yeah, he passed the big one to get it, but the No. 33 was a common number near the lead all night.

For the 18-year-old, he approached the playoffs with four consecutive DNFs due to crash from Iowa to Pocono. But he turned it around quick with the near-win at Canadian Tire Motorsport Park and four straight top 10s entering ‘Dega. There’s no better place to be racing, perhaps at no better time.

For Nemechek, a fourth-place Daytona run this year could put him in a little better mindset this Saturday. However, a trail of inconsistency usually leads to an up-in-the-air type of day at Talladega.

If either of these drivers can advance, it will be in the place of Austin Cindric and Chase Briscoe, who hold the final two spots to green this weekend. With Brad Keselowski Racing closing its doors at season’s end, it’d be a torrential disappointment for the Ford crew to have both competitive teams out of the title hunt in Round 1. Again, they’re only eight and 10 points to the good, respectively.

Good Lord! The Gold Digger WIFE AMMMYYEEE could be the surprise checkers person. She is driving the PACE car, yes she is (NASCAR IS SHAMELESS, and so is she). MO. Gotta get those multiple 15 minutes in there, I am ready for my close up now! God cannot wait till Ralph is off the radar and his….wife!

There are no shortage of idiots in this world & a lot of them call themselves NASCAR fans. Your comments every week are living proof of that.

Joshy is on his high horse, should I bow And Sally Beotch too!

Wow, JOSHY….go fluck yourself….and all the other names you post under. Don’t like it don’t read. I won’t shed any tears Joshy. Must be an EARNHARDT sack swinger, who drinks at the CHURCH Of EARNHARDT and who buys the hype of fake BS. Sally Beotch too.

At least I have the guts to attach my name to my comments, not just my initials.