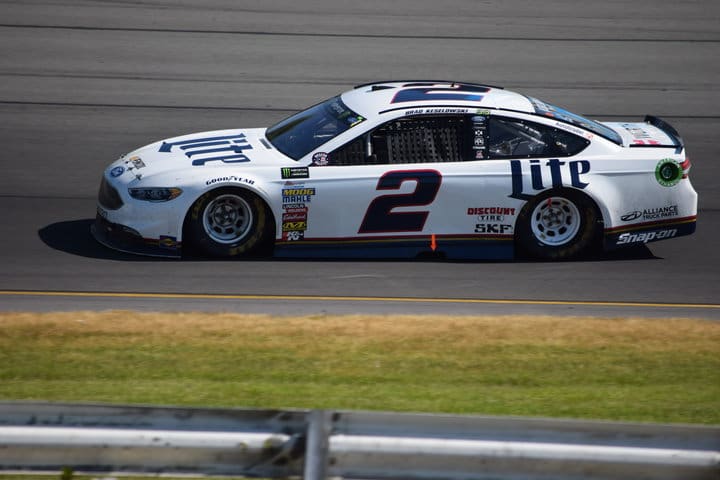 The first practice session saw drivers gather together in packs and draft each other.  In one of those packs, Team Penske’s Brad Keselowski turned in the fastest lap of the day at 48.398 seconds (197.859 mph).  Stewart-Haas Racing’s Kurt Busch was second fastest, 13-thousandths of a second slower than Keselowski.  Ryan Blaney was third fastest, followed by Ricky Stenhouse Jr. and Kevin Harvick.

Clint Bowyer was sixth quickest, followed by Aric Almirola, Danica Patrick and Joey Logano.  All of these drivers were in the same pack and turned their best lap on lap 11.  The time difference from first to ninth was .062 of a second.  Kasey Kahne was an eighth of a second slower than Logano in tenth.

As far as playoff contenders go, four of them including Keselowski were in the fastest pack of the session.  Denny Hamlin ended up 12th, while Kyle Busch, Martin Truex Jr. and Matt Kenseth were 15th, 16th and 17th, respectively.  Chase Elliott was 26th quickest, while Ganassi teammates Kyle Larson and Jamie McMurray were 31st and 33rd, respectively.

For Jimmie Johnson, the very beginning of the session produced a scare for him.  Before he even completed his warm-up lap, Johnson cut his left rear tire and spun in turns 3 and 4.

The red flag was displayed so that safety crews could collect Johnson’s car.  While there was little to no visible damage on the car, there was some damage underneath that needed to be taken care.  As a result, Johnson was one of two drivers (the other being Mark Thompson) who did not set a time in the session.

In the second practice, those who ventured out onto the track mainly focused on single-car runs in order to dial in their handling.  Others worked on qualifying runs.

Kahne was fastest in Happy Hour with a lap of 50.078 seconds (191.222 mph), a time that would have only been good for 30th in the first session.  Kahne’s lap was four-hundredths of a second faster than teammate Dale Earnhardt Jr.  Kurt Busch was third fastest, followed by Trevor Bayne and Elliott.

Paul Menard was sixth quickest, followed by Keselowski and Landon Cassill.  Harvick was ninth, while Chris Buescher rounded out the top 10.  Johnson, following repairs to the No. 48 after his earlier spin, ran 15 laps in Happy Hour.  He ended up 14th fastest.

Only 20 drivers turned in laps anywhere close to at speed in the session.  Three others (Patrick, Kyle Busch and Michael McDowell) drove a warm-up lap at speed before pulling into the garage.  Finally, six more drivers had no intention of practicing, but were forced to spend time during the session on pit road to serve penalties for infractions at either Dover or Charlotte.  Those drivers were Bowyer, Stenhouse, Truex, AJ Allmendinger, Matt DiBenedetto and Erik Jones.

Thompson was the only driver not to set a time in either practice session.  Thompson did venture on-track in the first session, but did not cross the start-finish line to start a timed lap.

Qualifying for the Alabama 500 is scheduled for 4:15 p.m. EDT Saturday afternoon after the Camping World Truck Series fred’s 250.  The session will air live on NBCSN.