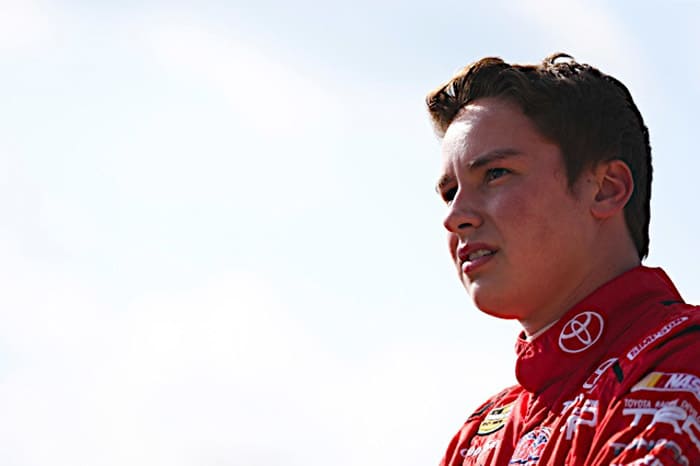 After multiple seasons in the NASCAR Camping World Truck Series and a handful of starts in the XFINITY Series, Christopher Bell is moving up to the latter full-time in 2018.

Bell will drive for Joe Gibbs Racing in the series next year, the team announced Friday (Oct. 13). Additional details like car number, sponsor and crew were not revealed, though it’s thought Bell may be taking the seat vacated by Matt Tifft, who will move to Richard Childress Racing in 2018.

“I can’t express how excited I am about the opportunity to drive full time for Joe Gibbs Racing in the XFINITY Series,” Bell said in a team release. “This has been a tremendous year for me, and obviously I remain focused on finishing the Truck Series season strong and hopefully bringing a championship to Kyle, Samantha and everyone at Kyle Busch Motorsports. I don’t think I could ask for a better place to take the next step in my racing career. I’m already comfortable with everyone at JGR, and I think the experience I have with them this year should help me at the start of 2018.”

Bell has competed in four races in 2017 for JGR in its Nos. 18 and 20 rides, scoring a top five and two top 10s. He’s in the midst of his second full-time season with Kyle Busch Motorsports in the Truck Series, currently ranking first in the overall standings for ’17 with five wins, 12 top fives and 16 top 10s, adding to a career total of seven wins dating back to 2015.

“Christopher has proven himself at every level of racing, and we are excited to have him run full time in our XFINITY Series program starting in 2018,” team owner Joe Gibbs said. “He has shown great maturity both on and off the track, and we think he is ready for this opportunity. We look forward to watching his continued progress in the sport.”

A replacement for Bell at KBM has not been announced.

Whaaat?
really…
i guess ryan preece couldn’t come up with the cash.
so sad.