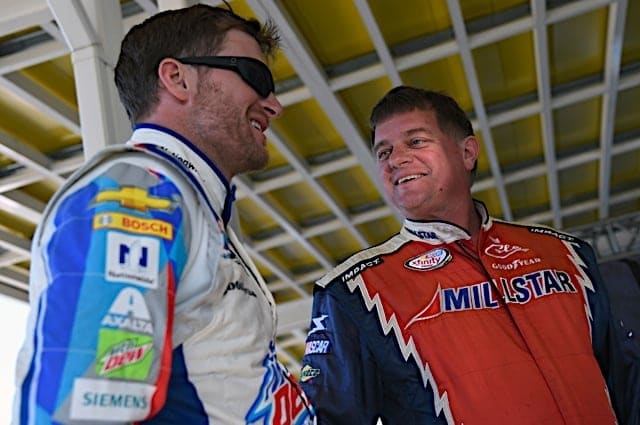 This weekend at Talladega Superspeedway marks the first Monster Energy NASCAR Cup Series start of the season for Mark Thompson.

It’s also his first start of the decade… and his first of the century.

Thompson, 66, is likely familiar to those who follow the ARCA Racing Series or even the last few seasons of the XFINITY Series. He’s also a footnote of the 1992 Cup Series season, a driver who competed in just one race that year, the Champion Spark Plug 500 at Pocono Raceway. After starting 38th, Thompson, sponsored by his own company, Phoenix Air, ended up 39th in the No. 62 owned by Henley Gray. He retired after just eight laps due to engine failure.

Come Sunday, Thompson will now return to the series, driving the No. 15 Chevrolet for Premium Motorsports.  Barring any last-minute changes, a guaranteed charter for this car means he’s already made the starting lineup.

Once Thompson takes the green flag, it’ll be 25 years since his last checkered flag in the series. Some kind of record, right?

Well, no. According to data on Racing-Reference.info, that distinction belongs to Jimmy Ingram. Ingram took 27-and-a-half years (and some change) between a start at Darlington Raceway in September 1952 and his final Cup start at Dover International Speedway in May 1980.

But the lengths between starts are certainly similar, and it’s interesting to think about the makeup of the fields during each of those scenarios. In 1952, Ingram was racing against the likes of Tim, Bob, and Fonty Flock, Lee Petty, and Buck Baker. These were legends of NASCAR, matching wits in the Southern 500, no less. By 1980, many of those drivers’ offspring were in the field (see: Richard Petty and Buddy Baker, who finished second and third at Dover, respectively). Racing alongside them were Terry Labonte and Dale Earnhardt, a fresh generation who remained in the sport through the 2000s.

Thompson’s Pocono start included Petty as well, plus Mark Martin, Alan Kulwicki and Darrell Waltrip. But come Talladega this weekend, only a select few of those drivers who started that Pocono race with Thompson are still around. Derrike Cope, Ken Schrader, and Morgan Shepherd are the only ones who have run a NASCAR race in its top three series this year. (None of them are running Talladega.)

To illuminate the longest streaks between Cup starts besides Ingram and Thompson is possible but intensely time-consuming. Surfing nearly 70 years of NASCAR results makes it difficult to create an exhaustive, accurate list.

The task did, however, give us a few famous names with droughts you might not have expected. Below you’ll find a record of others who took long breaks between Cup starts — at least a decade in each case.

Carl Long: On paper, this makes total sense. Long, who’s been running select Cup events in 2017, was banned from the series garage after his engine was found to be slightly too large in qualifying for the 2009 All-Star Race. Before then, Long had been attempting Cup races here and there. But he hadn’t actually taken a green flag in a points-paying competition since 2006. Back then, he started the summer Bristol Motor Speedway race for Front Row Motorsports, finishing 41st.

This season, Long made his Cup return at Kansas Speedway in May. A 31st-place finish there turned out to be the second best of his Cup career.

Ron Hornaday Jr.: Though a familiar presence in NASCAR’s Camping World Truck Series for years, Hornaday was absent from Cup for over 11 years. He competed in the final race of the 2003 season for Richard Childress Racing, coming home 20th in the No. 90 at Homestead-Miami Speedway. From that point on, he didn’t return (or even attempt a race) until a short stint with The Motorsports Group in 2015, driving the team’s No. 30. He qualified for just one race, the winter Atlanta Motor Speedway event (42nd), and failed to qualify three times before departing the team.

Dennis Setzer: Setzer is another longtime Truck Series competitor who ran occasional Cup races. In his case, Setzer popped up briefly in 1998 as a substitute for Bill Elliott’s former race team. A one-off start at Talladega in a McRib-sponsored No. 89 was followed by several races running Elliott and Dan Marino’s No. 13.

From there, he returned to the Truck Series for the better part of a decade. And though Setzer did attempt to qualify for a Cup race in 2009, his actual return ended up in 2011. That’s when he competed for K-Automotive Motorsports’ No. 92 in a single start at Bristol, finishing 38th.

Joe Ruttman: Ruttman’s gone through multiple periods of Cup inactivity, though none lengthier than a streak between 1964 and 1977. First appearing as an 18-year-old driving his family’s car at Riverside International Raceway, Ruttman competed there in 1963-64. He then drove on the local level until a chance appearance at Ontario Motor Speedway in 1977. Ruttman finished 13th there while driving a one-off for Robert Switzer. What followed was an on-again, off-again full-time Cup career that resulted in 19 top-five finishes through 225 career starts.

Honorable mention for Ruttman: no starts between 1995 and 2004. That’s the year he returned to park the Phoenix Racing No. 09 for seven events. The story goes in his first race that season, Rockingham Speedway, that he showed up without a pit crew and was parked after a lap (not that he wasn’t going to park it himself after a few laps anyway). It was the first incident in what became an ugly NASCAR start-and-park phenomenon.

Hershel McGriff: Here’s another driver whose Cup break took place in the series’ earlier days. McGriff competed in 24 races in 1954, winning all four of the races he ever won in his Cup career and ending the season sixth in the standings. Afterward, however, he returned home to be with family and work for the family business. Those obligations kept him out of the Cup Series until 1971.

That’s when McGriff ran three events, two at Riverside and one at Ontario, in conjunction with what’s now the K&N Pro West Series. From there, he attempted at least a race each year after that until 1994.

Butch Leitzinger: It’s slightly surprising that more road course specialists don’t show up on lists like these. Leitzinger ran Watkins Glen International between 1994 and 1996 for three different teams (one of which was his own). He then returned to the series over a decade later, this time at Sonoma Raceway. Competing for Bill Davis Racing’s No. 23 Toyota, Leitzinger finished 28th after starting 30th.

Jerry Hufflin: Hufflin was more of an ARCA guy (the 1974 Rookie of the Year, for that matter) who ran just three races in the Cup Series. The first two both came in ’74, a pair of top-30 finishes for Strong Racing. He then appeared again at Dover in 1990 for Smith Racing, finishing 37th following an oil leak.

Andy Belmont: Speaking of ARCA, Belmont, a familiar sight in the series from the mid-1990s to the late 2000s, competed in eight Cup events in 1992. Competing for Rookie of the Year, he earned a best finish of 28th at Pocono but never seriously contended. He then attempted to qualify for nine races throughout the rest of the 1990s, but didn’t actually see another green flag until 2004. That’s when he drove two races for Hermie Sadler’s No. 02, retiring early in each during a year where field fillers start-and-parked at the back of the pack.

George Follmer: Follmer was a former Indianapolis 500 competitor and sports car ace who tried his hand at Cup in 1974. He started the year full-time for legendary car owner Bud Moore but only lasted 12 races. He then got picked up by Roger Penske at Riverside, winning the pole before fading to 30th during the race itself.

Follmer then had a bout of Cup inactivity between 1975 and 1986, returning the latter year for a pair of road course races. He ran Dick Midgley’s No. 29 and did so the following year, too, earning a best finish of 16th at Riverside.

Carl Long wasn’t banned for that engine, he was given a $200,000 fine which he could not pay. And it was a totally over the top idiot penalty, his engine was simply worn out, not built that way and Crapcar knew it. Meanwhile it’s all wink wink nudge nudge for Hendrick when Knaus brings out cheater shocks and god only knows what else. Long only recently got back in when he and Nascar worked out some kind of a deal. Likely desperation for entries on the part of Nascar.