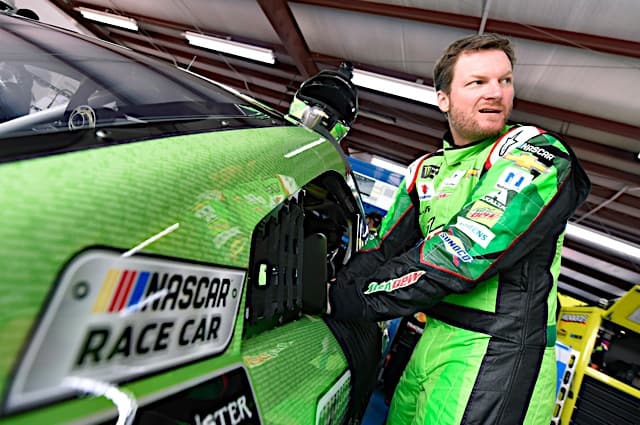 That came to an end Saturday when the No. 88 Hendrick Motorsports Chevrolet ended quickest in Monster Energy NASCAR Cup Series qualifying at a lap time of 50.256 seconds (190.544 mph).

For Earnhardt, who runs his final Cup race at Talladega Sunday in the Alabama 500, it was his 15th career pole and second of the season, also extending a streak of four straight front-row starts on plate tracks.

“It’s hard to believe we’ve never had a pole here before,” Earnhardt Jr. said. “Hopefully, this one is just as good tomorrow. To run by yourself is one thing, completely different to compete against all the other cars out there. We got the pole at Daytona, front row on the other two, we continued that streak today.

“The concern goes right to tomorrow to see how we’ll handle in the pack. It’s nice to get a pole here and to hear the fan excitement for it.”

Daytona 500 pole-sitter Chase Elliott finished second, 0.035 of a second behind teammate Earnhardt. With HMS securing all four cars in the top 11 for Sunday, Elliott has learned not to put an emphasis on aiding teammates at the front of the field.

“It’s hard to help each other at these places,” Elliott said. “The big thing is we don’t want to hurt each other. You can’t put yourself in a bad spot to help someone else, teammate or not.”

.@DaleJr got the pole, and if he gets the win, it'd be for his fans. #appreci88ion pic.twitter.com/EpVRgvWvjy

Yawn, I said last week he’d end up with pole. Ray Charles could of seen this coming.

Brian has no shame!

Crasscar really needs to change it up, this stuff is just getting way old.

No one who doesn’t subsist on a steady diet of Flavor-Aid is surprised. I doubt he has the competitive fire to take advantage of this freebie, however.

LOL…. I knew that would be most fans’ reaction. It was mine as well. I really don’t think it’s that far of a stretch to think Dale (or an HMS car, look at the RP poll winners for the last 5 years) could legitimately win the pole at any RP track, but sometimes things just seem too perfect for “THE SHOW” to be true.

Just think. If Brian finds a sucker…er sponsor for Danica next year guess who gets the pole for the 500? Again!