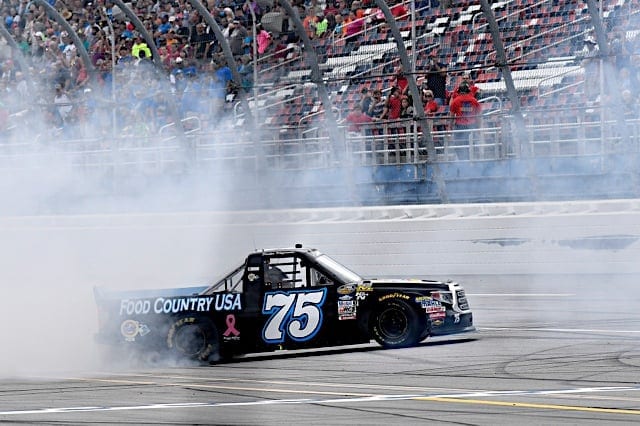 It’s been five years, but some drivers never lose a knack.

For Parker Kligerman, the part-time Camping World Truck Series driver, scored the victory Saturday at Talladega Superspeedway, breaking a five-year winless drought that dated back to the same track in 2012.

While the Big One hit in Turn 1 on the final lap, the caution flew, awarding race leader Kligerman the victory.

“When races get crazy like that, you’re waiting for it to come your way,” Kligerman said. “It’s an honor to be racing this team. To win with them is unbelievable.”

Christopher Bell led the field to green with two laps to go, losing the top spot when Justin Haley took it three-wide on the backstretch. Despite the move that slowed the inside lane, pole-sitter Bell held on to finish second, his third straight top-two finish in the Truck Series playoffs.

“When someone taps your bumper the wrong way, you’re sideways,” Bell said. “We’re all just hanging on. The No. 75 got a hold of me and he was pushing so hard all day long.”

Back in Victory Lane! ? pic.twitter.com/p5ksNc9j5x

Unfortunately, Cindric’s top-five finish was the only positive for Brad Keselowski Racing Saturday, as Chase Briscoe was eliminated from the playoffs after suffering an early oil line issue that trapped his No. 29 Ford nine laps down.

“We were close all day,” Briscoe said. “When Kaz [Grala] wrecked, I thought we had that thing. We could definitely taste it. It wasn’t meant to be.”

Briscoe was knocked out by John Hunter Nemechek, who overcame multiple accidents to finish sixth, advancing to the Round of 6.

Cody Coughlin’s day went even more haywire, when his No. 13 Toyota got turned into the outside wall with 24 laps to go. Coughlin, who led a career-high nine laps on the day, caught air before landing back on all four wheels and spinning to a stop.