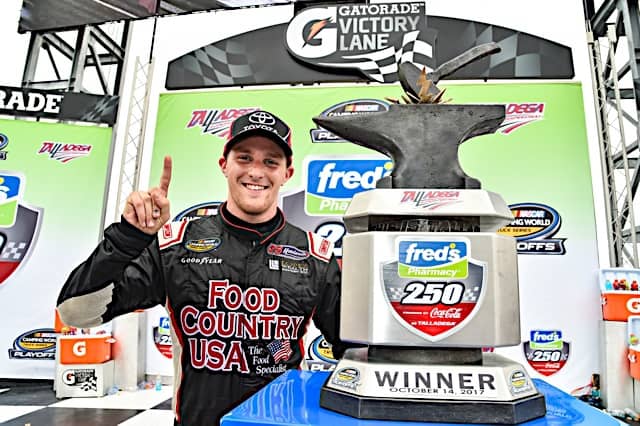 In a Nutshell: Parker Kligerman emerged from the carnage victorious in Saturday afternoon’s fred’s 250 at Talladega Superspeedway. The driver of the No. 75 Toyota kept the pedal to the floor as a last-lap melee wiped out a large chunk of the remaining drivers and scored his second career win at the 2.66-mile track. Polesitter Christopher Bell wound up second, followed by Myatt Snider, who’s running a part-time schedule for Kyle Busch Motorsports. Grant Enfinger and Austin Cindric rounded out the top five.

Who Should Have Won: Throw all of the drivers on the track into a hat, and any one of them could have been the one. This time, it turned out that Kligerman, who restarted in the outside lane with two laps remaining, was the one in the right place at the right time.

Way back in February, it was restrictor plate racing that began Kaz Grala‘s championship hopes as a rookie for GMS Racing with a victory at Daytona International Speedway. And when it came down to it, a restrictor plate race ended his title run at Talladega on Saturday.

Just as stage one came to a close, contact from Cody Coughlin sent Chris Fontaine spinning and set off a chain-reaction accident that saw Grala spin out of line and hard into the outside wall. With the front end of the No. 33 Chevrolet crushed in, the damage was terminal and Grala was forced to retire to a 29th-place finish after completing just 18 laps.

Grala, who was already below the cutoff line for the Round of 6 before the race began, ended the race 25 points behind John Hunter Nemechek, who took the sixth and final transfer spot.

John Hunter Nemechek In, Chase Briscoe Out for Round of 6

Just seven laps into Saturday afternoon’s race, Chase Briscoe‘s day turned ugly. He was black-flagged for heavy smoke billowing out of the back of his No. 29. Instead of stopping on pit road to diagnose the issue, Briscoe immediately took the hard left turn to the garage area, and it took 10 laps for the team to repair what ended up being a warped O ring on one of the valve covers.

By then, the damage was already done, and it looked like Briscoe wouldn’t make it into the Round of 6, but the No. 29 team never gave up.

It turned out to be a nail-biter down to the finish when Nemechek was collected under the third caution at lap 55. Despite the heavy damage to the truck, the No. 8 team worked feverishly to piece it back together and get its driver back out on track before the five-minute crash clock expired. When the green flag flew, Nemechek was able to reach minimum speed and was able to continue.

As more and more trucks wrecked out of the race, including the Big One that brought out the red flag for a short period, the point margin separating Briscoe and Nemechek continued to shrink.

Meanwhile, Nemechek struggled to make ground through the field in his damaged truck and even sat below the cutoff line several times in the closing laps. But a late-race caution, combined with the last-lap carnage that the driver of the No. 8 Chevrolet somehow managed to navigate through, allowed him to finish sixth, enough to take the sixth and final transfer spot, by a slim eight-point margin over Briscoe.

“This is just the situation we were dealt in the playoffs and you have to go out here and perform. Honestly, if we run better at Loudon this doesn’t happen,” Briscoe said of his run. “As much as this sucks right now I am still grateful and fortunate to be running race cars for a living.

“It’s hard to look at the positives right now, but one positive is we were qualifying 16th or 17th in past years on superspeedways and we brought a truck that qualified fifth and sixth, so the guys are working hard. Even though we’re shutting down at the end of the year, we’re still trying to fight and still go win races, so we’re bringing out best pieces these next couple weeks and see if we can’t get some wins.”

Briscoe’s teammate Cindric remains as Brad Keselowski Racing’s only hope at winning a championship in its final season in the Truck Series.

Ryan Truex picked up a new sponsor ahead of Saturday’s Talladega race, however his run was cut short before he ever really got going. With just a couple laps remaining in the first stage, Truex was the victim of a chain reaction accident that did terminal damage to the front end of the No. 16 Toyota. He ended up 28th after running just 19 laps.

“When you’re on somebody’s bumper, you don’t have time to react and I looked up and he (spotter) said there was a wreck and I was already in it. It’s tough for Bass Pro Shops. I want to thank them and Johnny Morris (Bass Pro Shops founder and CEO) for jumping on, TRD (Toyota Racing Development), Toyota and everybody who makes this deal possible. We had a good truck. I feel like I had the outside lane working for a little bit there and it kind of got strung out just trying to make it to the end of the stage. It’s Talladega – it happens sometimes.”

Vinnie Miller made his Truck Series debut Saturday afternoon for Bolen Motorsports, and despite the carnage, he managed to stay out of trouble all day. The Michigan native, who finished 29th in his lone XFINITY Series start at Chicagoland earlier this season, ended up seventh when the checkered flag flew.

“It was my first time on a superspeedway. I really didn’t know what to expect, but obviously I wanted to get a top 10 like any driver would,” Miller stated afterwards. “I probably expected a 15th or something so getting seventh is a pretty big coming from me and the team. We’re all very happy.

“I was just trying to stay out of the wrecks and then ride to where I can get some drafting experience to get approved for any big tracks that I want to do next year. I did my goal of avoiding wrecks and then easy and patient and seventh was the outcome.”

Clay Greenfield, who runs just a handful of races each season, picked up his career-best finish at Talladega on Saturday. After being involved in multiple accidents, including the last-lap melee that ended the race under caution, Greenfield and his damaged truck emerged eighth, edging out a prior best-result of 10th at Daytona in 2012.

Clay Greenfield sits on the bed of his truck. He actually finished in the top-10. #nascar pic.twitter.com/qYyXiLZIjo

No. of rookies to finish in the top 10: 1; Grant Enfinger, finished fourth

Rookie of the Race: Enfinger

Playoff Points Update: And then there were six. Bell and Ben Rhodes were both locked into the Round of 6 heading into Talladega. Joining the pair of Toyota drivers will be Johnny Sauter, Matt Crafton, Cindric and John Hunter Nemechek. Grala and Briscoe, who finished 29th and 22nd, respectively, did not advance.

Up Next: The Camping World Truck Series takes a weekend off before heading to Martinsville Speedway for its second visit on the season. In April, Chase Elliott took the checkered flag ahead of Sauter. Coverage for the Alpha Energy Solutions 200 begins Saturday, Oct. 28 at 1:30 p.m. ET on FOX Sports 1; the race can also be heard on your local MRN affiliate or SiruisXM NASCAR Channel 90.