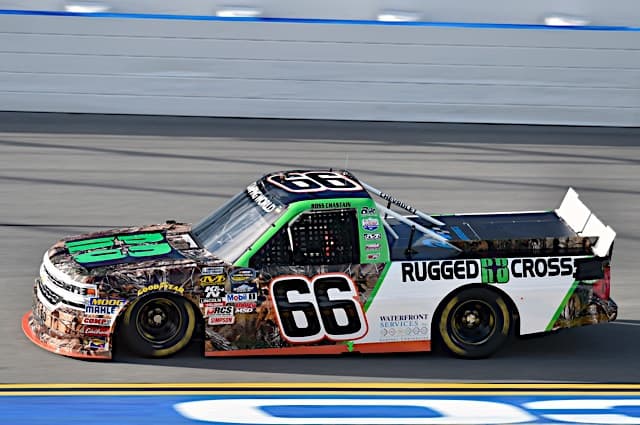 In a rather chaotic day at Talladega Superspeedway, many drivers left with career-best finishes. One of whom was Vinnie Miller.

Making his NASCAR Camping World Truck Series debut with Bolen Motorsports, Miller cool, calm, and collectively saved his equipment to be there in the end.

Sneaking through the Big One that ended the race under yellow on the final lap, the 20-year-old came out in the top 10, finishing seventh.

“It was my first time on a superspeedway, I really didn’t know what to expect,” Miller said. “But obviously I wanted to get a top 10 like any driver would. I probably expected a 15th or something so getting seventh is pretty big coming from me and the team.

“We’re all very happy. I was just trying to stay out of the wrecks and then ride to where I can get some drafting experience to get approved for any big tracks that I want to do next year. I did my goal of avoiding wrecks and then easily and patiently, seventh was the outcome.”

The Metamora, Mich. native has made a splash in the sport this year making his NASCAR debut at New Smyrna Speedway in February in the K&N Pro Series East. He finished 13th, putting on a consistent showing. He’s made 14 starts throughout the different ranks in NASCAR, including his XFINITY Series debut at Chicagoland Speedway.

The strong performance Saturday just may stir the pot for his future.

“Week-to-week,” Miller said of his plans. “We may do a few races with them next year hopefully. We’re working on a deal for next year but haven’t released anything yet.”

P25 for Vinnie in first of two practices today. The @BolenMotorsport #Silverado will back on track at 1pm CT on @FS1 pic.twitter.com/KLtHNw6gKM