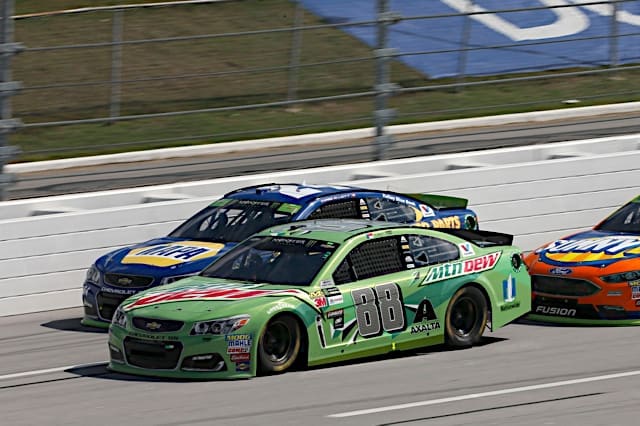 The anxiety was higher than usual for the initial start of Sunday’s Alabama 500 at Talladega Superspeedway. Dale Earnhardt Jr. started from pole and raced for the lead early.

In Earnhardt’s final season in the Monster Energy NASCAR Cup Series, he checked off another track he will not race again. This time it was Talladega, a track he and his father Dale Earnhardt Sr. combined to win 16 times across four decades, and what stood as perhaps his last realistic chance to win in his struggling final season.

And it looked to be a reality in the closing laps, as the No. 88 Chevrolet was among the first colors seen across the start-finish line with three laps to go.

However, despite the fans’ vocal support from the grandstands, Earnhardt was slowed by damage suffered in the race’s final accident on lap 183, hitting the checkered flag seventh on the day.

“It knocked the front-end in really bad, bent the splitter down about 1.5 inches,” Earnhardt said. “On the last restart, it just wouldn’t go, in the corners especially. Everyone around us were wasting their time pushing us and they figured it out. They decided to leave us alone.”

The fact Earnhardt finished Sunday was remarkable, given the sight of only 14 cars crossing the finish line after 188 laps. But things got close for the Hendrick Motorsports driver, who dodged multiple accidents to come home with a relatively clean ride.

For Earnhardt, it wasn’t skills that kept him going.

“We just got lucky with those wrecks,” he said. “Things just start flying around. I don’t know… it ain’t nothing I’m doing. I’m just not getting hit. It’s really luck. I thought the car had enough to win before we bent the splitter down.”

Penalized for speeding on lap 53, Earnhardt, despite the winless afternoon, was thrilled to finish the race near the front for Junior Nation.

“I really do owe a lot to this track,” he said. “It’s just been a very fun place. When I was a little kid, we got to go to a handful of tracks, but this was always a fun trip. A lot of great memories here.

“It’s been a hell of a weekend for me. I’m glad to be able to finish and finish well, that means a lot to me. I know a lot of folks came to travel here and to see us run. I know they’re disappointed we didn’t win but I’m glad they got to see us run the whole event. Hopefully they enjoyed it.”

Coming into ‘Dega with plenty on his mind, Earnhardt also had safety in the back of his head, as this weekend was a “concern” for him following his multiple concussions in his career.

Still, it didn’t stop him and the team from pushing the limits, something Earnhardt is proud of.

“I think anyone who questions our desire to be here and compete this year, they can look at the risks we took this afternoon,” he said, “knowing any of those wrecks could’ve given me an injury that would’ve held me out the rest of the season. That hypothetical, but it says a lot going out and competing and racing hard.

“You can’t win the race if you race scared. You have to block it out and hope it’s not your day.”

Leaving Alabama with a solid top 10, his sixth of 2017, Earnhardt hopes to enter the final five races of his career with happier thoughts toward one more win.

“We got to the racetrack with a positive attitude,” he said. “I don’t think we’ve lost hope on winning a race for the rest of the field, I wouldn’t want a team who’d think that way either. We’ll go in with solid attitudes.”

Somebody had some angel wings with him today. Great run @DaleJr