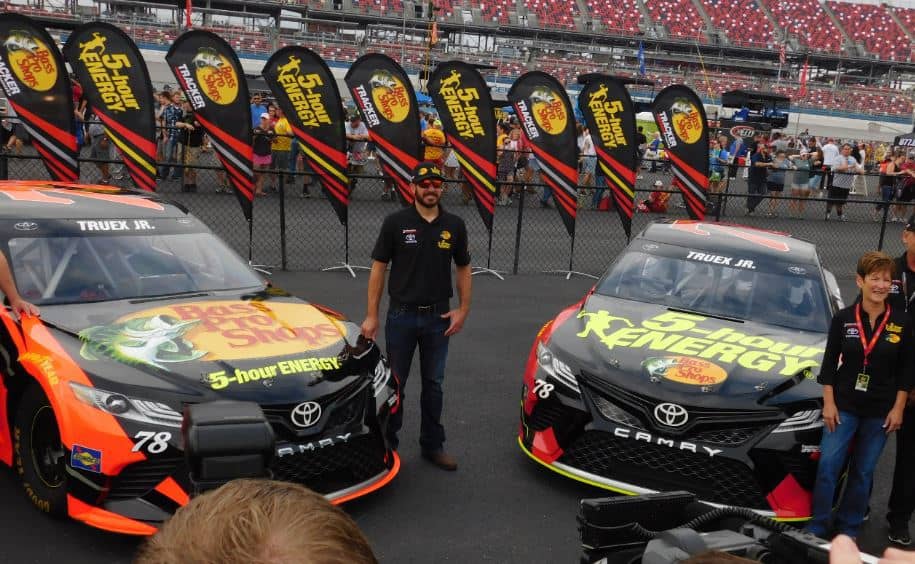 Following a season that has seen Martin Truex Jr. score six wins and the championship points lead with six races remaining, Bass Pro Shops and 5-hour ENERGY ahs stepped up, jumping onboard for 30 races in 2018.

In a unique business-to-business agreement, the two will share primary status on the No. 78 Toyota next year, with Bass Pro Shops sponsoring the hood for 16 races while 5-hour ENERGY does 14.

For team owner Barney Visser, if it weren’t for the team’s accomplishments this season, “this wouldn’t the happening” for 2018.

“For me, it’s terrific,” Visser said. “You don’t see me dancing in the aisles, but inside I am. Martin has just delivered, you’ve all watched the last few years. It’s been remarkable on what he and the guys have been able to accomplish. We have to contribute it to that.”

Truex, who’ll start his fifth year for FRR in 2018, says it’s been a long time coming following years of hard work from the Colorado-based team.

“To represent two great companies, I’m excited for everyone on this team,” Truex said. “From all our hard work over the years, to finally come to a point where the car is fully funded and having success on the track. Hopefully we can do these guys proud.”

For Johnny Morris, founder and CEO of Bass Pro Shops, the roots of both FRR and his company is what makes it a natural combination.

“This is a great American sport, Martin is genuine,” Morris said. “We’re just really proud. Like Barney, where it started, I think of how our company started. I think this is a symbol of what can happen when people work hard and aren’t afraid to take risks.”

Auto-Owners Insurance will stand as primary sponsor for six races while the final two events on the 2018 schedule will be announced at a later date.

Big announcement just unveiled for the future of the 78…#WeAreFurnitureRow