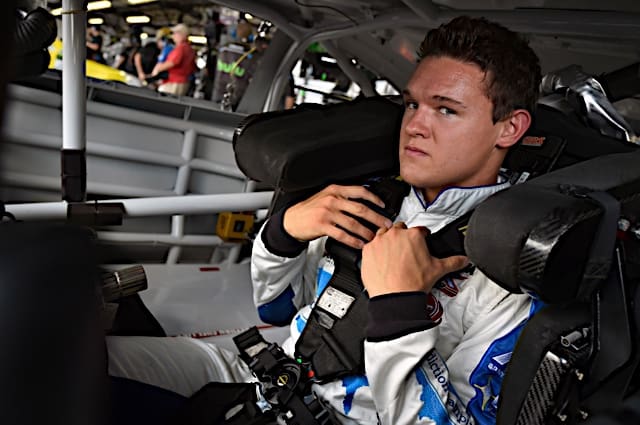 Many stories may have ended in the garage Sunday at Talladega Superspeedway, but one prevailed.

Gray Gaulding may have crossed the finish line with more tape than visible sponsor logos, but a finish was enough to earn the 19-year-old his first top 10 in the Monster Energy NASCAR Cup Series, ending the day ninth.

Even more special is the team it came with. Racing four different cars through 24 starts in his rookie 2017 season, Gaulding started the Alabama 500 behind the wheel of the No. 83 Toyota for BK Racing, an underdog team with only two prior top-10 finishes in 487 entries since 2012.

“It means so much,” he said. “It’s so cool to know a small team is up here duking it out, getting top 10s. We got a top 10 at Talladega. [It’s] Pretty cool to race in front of these fans, it’s a dream of mine to be able to race here and get a good finish, and we did it.”

In the numerous accidents that damaged nearly every racecar Sunday, Gaulding’s most significant damage occurred with 33 laps to go when a pileup impacted the right side of his car.

Continuing on after multiple pit stops, Gaulding received the free pass on lap 166 — his second of the day — and avoided the lap 171 Big One to sneak through for the result.

“I’m 19 years old and to be able to do it with my family here… it’s a dream come true,” he said. “I can’t thank my family, my mom and dad, my grandfather, everyone who has supported me my whole life.

“This is what I’ve dreamt of… to be able to race up there duking it out with the top guys, man. And I got rookie of the race! Unbelievable.”

Gaulding previous best Cup result came the last time we raced at Talladega in May, finishing 20th. Perhaps, the Virginia teen has a knack for surviving to the end at ‘Dega.

Gray talks with members of the media after earning rookie of the race & his career best finish -GGR PR #Alabama500 pic.twitter.com/zeXCH2Ebqw

Well, it was a Gray Gaulding kinda race..

And it only took 26 cars not finishing.