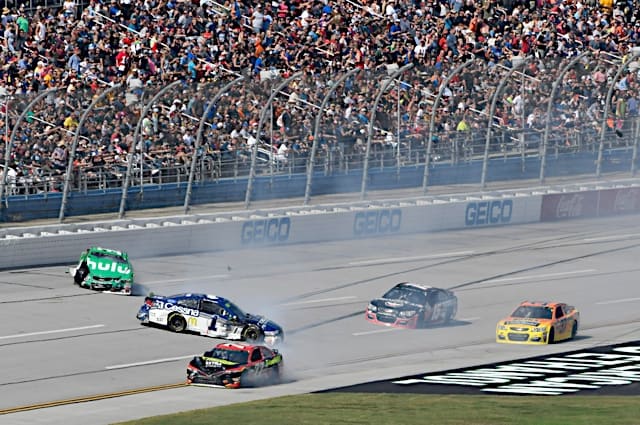 For Brad Keselowski, it’s a welcoming sight to see not just Victory Lane but the end to a Toyota win streak. And after a sorry summer for the Blue Oval brand, his manufacturer now has one to call their own.

Despite the cavalcade of wrecks in this 188-lapper, Ford made up four of the top-five finishers. Trevor Bayne, Joey Logano, and Aric Almirola — three different Ford teams — filled in third, fourth, and fifth in the running order.

Toyota may have trounced the competition up to this point in the playoffs. But at least Ford can say they’ve had this type of racing figured out. Plate racing boosted Keselowski while leaving at least two Camrys driven by Kyle Busch and Matt Kenseth on the verge of playoff elimination. – Zach Catanzareti

Five years following his first Truck Series win, Parker Kligerman picked up another. The NBC analyst led the final two laps in a wild finish that gave his racing resume a much-needed boost.

The start was just Kligerman’s seventh this season, all for part-time Henderson Motorsports. It was the No. 75 Truck’s first ever victory, a feel-good story for an organization that’s run in one of the sport’s top three series since 1982.

For Kligerman, it’s his best run in a season filled clawing for starts, putting his career at a crossroads. Will the young driver continue to pursue the analyst route, developing as an NBC reporter or seek full-time opportunities behind the wheel for 2018?

Behind Kligerman’s surprise victory, the story was about survival. Nine trucks wound up inside the garage as a long list of Talladega wrecks took out top contenders. Ryan Truex, Ben Rhodes, and Regan Smith were among those who failed to finish Saturday’s race.

While Rhodes survived to fight another day for the 2017 Truck Series championship, two title contenders did not. During the first stage, Chase Briscoe saw his title hopes go up in smoke as the No. 29 truck had to go behind the wall. He finished 22nd, nine laps off the pace and became the first driver to miss the Round of 6.

Daytona winner Kaz Grala was also eliminated from championship contention after wrecking out on lap 18. The No. 33 team had to start from the rear and never made it inside the top 10, a far cry from dominating the first plate race of the season.

The truckers now have their final off weekend of the year coming up before competing in four consecutive races to determine the 2017 series champion. Christopher Bell, Rhodes, Johnny Sauter, Matt Crafton, Austin Cindric, and John Hunter Nemechek will fight it out for the title. – Dustin Albino

Last weekend, Pirelli World Challenge crowned their touring car division champions at Mazda Raceway Laguna Seca.  In the TC class, Paul Holton won both races from the pole to win the championship in his Audi RS3 LMS Club Sport for C360R.  The team has already indicated that the RS3 LMS Club Sport will race in the new TCR class in the IMSA Continental Tire SportsCar Championship in 2018.

In TCA, Eric Powell won both races on track Saturday in the Tech Sport Racing Scion FR-S.  However, Powell was disqualified from the second race due to violating Section 10.3.5 of the Pirelli World Challenge Technical Regulations.  In other words, Powell’s Scion turned too many RPMs.  Kenny Murillo inherited the victory.

Finishes of fourth and fifth were enough to clinch the TCA championship for S.A.C. Racing’s Matthew Fassnacht.  In TCB, Tech Sport Racing’s PJ Groenke won both races in his Chevrolet Sonic.  That was enough to earn him the final TCB championship (the class is going away after this season).

In legal news, former sports car racer/team owner Scott Tucker was convicted in federal court Friday of 14 felonies tied to his payday lending business.  Early last year, Tucker and his personal lawyer, Timothy Muir, were indicted on 14 charges that included the collection of unlawful debts, issuance of usurious loans (with interest up to 700 percent), misleading contracts, and misrepresentation of business ownership.  The duo received guilty verdicts on all charges.

In regards to the business ownership misrepresentation, Tucker claimed that a number of his payday lending businesses were actually owned by Native American tribes.  In reality, they were owned and operated by Tucker.

It’s safe to say Tucker and Co. won’t be racing sports cars anytime soon. Both Tucker and Muir are under home confinement until they are sentenced early next year.  Each could face 20 years or more in federal prison. In addition, the government will continue seeking restitution that could reach into the billions. – Phil Allaway

With just two events left in the 2017 season, NHRA’s championship Countdown race continues to be fierce after the AAA Texas NHRA FallNationals. Brittany Force, teammate Robert Hight, Jason Line, and Eddie Krawiec walked away victorious and kept themselves in the championship fight in Texas.

The big drama for the event came from the camp of Top Fuel points leader Steve Torrence. Torrence wrecked his primary car in a horrific crash in the second round, but walked away unharmed.

The Capco team thrashed to prepare the backup ride before the next round and succeeded, only to have the engine grenade in the car in the third round versus Brittany Force.

Force faced off against Shawn Langdon in the finals and put down a 3.681-second, 326.87 mph run to best Langdon’s 3.693 seconds at 326.56 mph. She also got by Terry McMillen, Doug Kalitta, and Torrence on her way to the final round matchup.

“It’s been quite a day. A lot needed to happen and it seemed to work in our favor,” Force said. “Really, it was about us going rounds. We had Doug Kalitta and Steve Torrence, the two people in front of us in the standings. Everyone has been struggling trying to take them down. They’ve been killing it. When we pulled up there, I felt confident in us that we were going to turn those win lights on. That’s what we needed to do, we were able to do it and then we were able to take down Langdon and won the thing. This is a huge win.”

Hight made it a Nitro class sweep for John Force Racing by taking down defending Funny Car world champion Ron Capps. He made a pass of 3.877 seconds at 332.34 mph to beat Capps’ 3.927 seconds at 329.18 mph. Hight also beat Jim Campbell, Alexis DeJoria, and Tim Wilkerson in earlier rounds.

Sunday’s victor trails Capps by just 24 points in the Funny Car battle between them.

“This was huge. A round win is worth 20 points, but truthfully, that final round win for us was 40 points,” Hight said. “We were 44 back going into the final round and had we lost, that’s 64. Winning brought it back to 24 which is a little over a round with two races left.”

In Pro Stock, KB Racing teammates Bo Butner and Greg Anderson have been making most of the headlines, but it was Line who prevailed this week. Line faced off against Drew Skillman in the finals and took home the Wally with a run of 6.548 seconds (211.20 mph) while Skillman redlit by just .001 seconds.

Pro Stock Motorcycle came down to Krawiec and Jerry Savoie for the third consecutive year. Savoie took it in the first go round while Krawiec won the second match-up. Well, call this one the tiebreaker as it went to Krawiec when Savoie redlit. Lady Luck shined on Krawiec, who spun the tires but still wound up with the trophy. – Toni Montgomery

Sorry I had to miss the race. Congratulations Parker; I can think of no one more deserving of a win! He seems like a great guy, always humble, always willing to do whatever it takes to further his career; I have a lot of respect for him. He is a great broadcaster as well, He is refreshing and always has something interesting and insightful to say. I see a bright future for him, whatever he does.