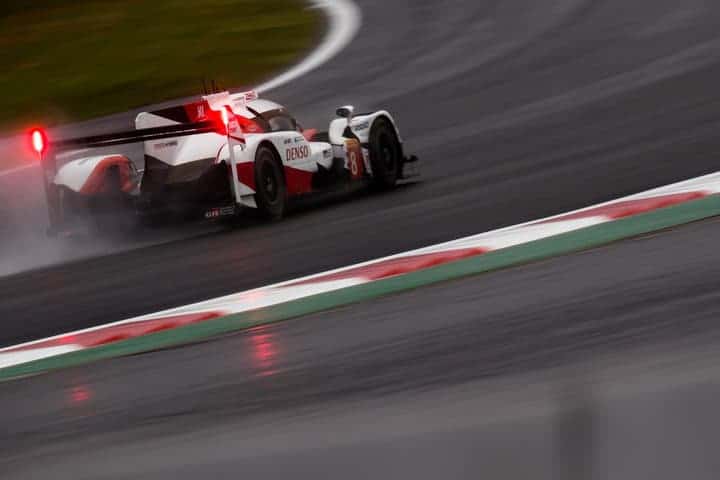 Fuji Speedway has a long history of races completely ripped to shreds by weather conditions.  The first Grand Prix in 1976 is one example.  An abandoned JGTC (now SuperGT) race in 1998 that featured a horrific crash on the pace lap is another.  While Sunday’s 6 Hours of Fuji featured no injuries, the weather dictated everything.

Toyota GAZOO Racing’s Sébastien Buemi, Kazuki Nakajima and Anthony Davidson took advantage of uncharacteristic struggles for Timo Bernhard in the wet to snatch the lead late in the second hour.  From there, the No. 8 kept themselves near the front of the pack.  The No. 8 finally took the lead for good when their sister car pitted with two hours remaining.  From there, they held on until the red flag came out with 90 minutes to go.  Victory was earned when the race was declared complete with 14 minutes to go.

However, the weather was the real story.  There were two red flags that took up one hour and 49 minutes in total.  There were also seven safety car periods, mostly due to fog.  Even during green-flag portions of the race, race director Eduardo Freitas would place part of the track under a local yellow due to visibility issues.  It rained for nearly the entire race, but never too heavily.  Cool temperatures in the mid-50s and no wind simply meant that the clouds had nowhere to go.

The No. 7 Toyota of Mike Conway, Jose Maria Lopez and Kamui Kobayashi completed a Toyota one-two finish at the Toyota-owned track.  The No. 1 Porsche of Neel Jani, André Lotterer and Nick Tandy was third.

In LMP2, Valliante REBELLION started off with a front row sweep, but Nelson Piquet Jr. kissed his track position goodbye just as the green came out when he wiped out.  That allowed the No. 31 entry shared by Julien Canal, Nicolas Prost and Bruno Senna to assume the advantage.  It was a lead that they would maintain for the vast majority of the race.

For the No. 13, the trouble was only just beginning.  After one of the safety car periods, Mathias Beche got into a bumping match on the pit straight with CEFC Manor TRS Racing’s Jean-Eric Vergne over positioning.  Once the green came back out, the two drivers fought hard for the position.  However, contact was made exiting turn 4 that resulted in Beche spinning hard into the wall.

The crash itself was enough to put the No. 13 out of the race.  However, that wasn’t the end of their problems.  The car was later disqualified from the race for a driving time infraction.  As LMP2 is considered a Pro-Am class in the WEC, an “amateur” driver must drive a certain amount of time.  David Heinemeier Hansson, the team’s amateur driver, never got in the car before it crashed out.

In GTE-Pro, AF-Corse’s James Calado and Alessandro Pier Guidi earned their third win in the last four races after overcoming the Porsche onslaught.  The No. 91 Porsche of Richard Lietz and Frédéric Makowiecki was second, followed by the No. 92 of Michael Christensen and Kevin Estre.  The No. 92 Porsche was in position for a class win before a late spin due to contact from Ford’s Andy Priaulx.

Speaking of Priaulx, he had a rather terrible day on Sunday.  In addition to the contact with the No. 92, Priaulx spun into the trap at turn 1 to bring out a full course yellow.  The car also earned a stop + 60 second penalty as well.  As a result, Calado and Pier Guidi now hold the GTE-Pro points lead with two races to go.

In GTE-Am, Spirit of Race’s Francesco Castellacci, Thomas Flohr and Miguel Molina took their first win of the season in their Ferrari 488 GT3.  A similar Ferrari shared by Matt Griffin, Weng Sun Mok and Keita Sawa finished second.  Both Ferraris were every bit of a match to some of the GTE-Pro cars Sunday.  The Dempsey Proton Racing Porsche shared by Matteo Cairoli, Marvin Dienst and Christian Ried was third.  Team co-owner Patrick Dempsey was on-site Sunday, but the weather just didn’t allow the team to get the job done in front of the actor/former driver.

Due to the timing of the red flags, a number of drivers (including Davidson in the race-winning Toyota) never got the chance to drive on Sunday.  With the exception of the situation involving the No. 13 above, those drivers will still receive points.

Results of the FIA World Endurance Championship 6 Hours of Fuji

The FIA World Endurance Championship returns to action in early November at Shanghai Circuit in China for the 6 Hours of Shanghai.  The race is held on Sunday, Nov. 5, but due to time differences, it will begin on Saturday night, Nov. 4 in the United States.