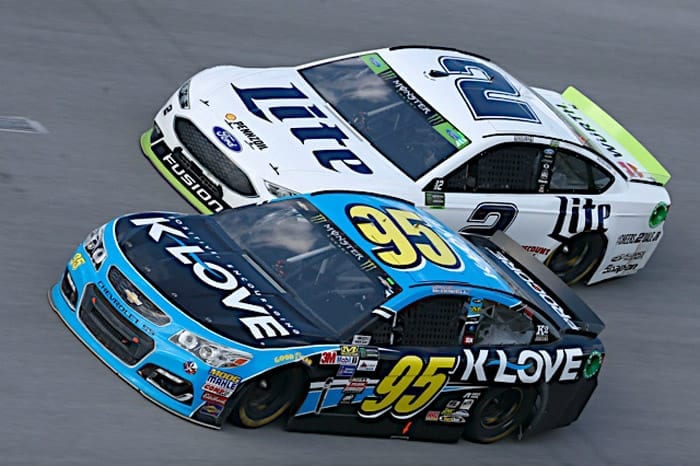 One thing that struck me when I first started in NASCAR was that if you spent enough time looking, you could see fans at a race who supported every driver in the field.  T-shirts, hats, and bumper stickers were among the ways they proclaimed their loyalty.

Fast forward a couple of decades, and thanks to souvenir merchandisers who have gear available for just about everyone, the same still holds true. And now, fans can add social media to the ways they can stand up for their favorites. Some of the most popular drivers on Twitter are ones who struggle to crack the top 30 most weeks.

It’s refreshing to see that most drivers have people actively pulling for them every week. It is why the media, television in particular, needs to do better. Despite a crazy race Sunday, one with plenty of underdogs charging their way to the front, playoff drivers and top-tier teams remained too much of a central focus on NBC.

So as great as it was to scroll through Twitter and see support for everybody and their brother (in a couple of cases literally) this weekend, how many new fans end up choosing a driver based on only a handful of options presented on the broadcasts each week?  How many fans, when faced with choosing someone new to root for, will skip right over a bunch of names because they’ve barely heard of them? It hurts the teams in the long run, and it shortchanges the fans in the short run. With so many veterans retiring these days, it’s critically important for NASCAR to market all their replacements.

Fans have more ways than ever to root for their favorites. They just need to be shown all their options more often.

Top of the Class: Talladega II

Sometimes, restrictor-plate racing is less about racing and more about surviving.  This certainly proved true Sunday at Talladega, where only 14 of 40 starters were still running at the end. Superspeedways often represent an opportunity for smaller teams; the plates equalize the cars. Add in some excellent plate drivers in the group and it’s a race where an underdog could easily win.

But this week, a few Cinderellas who could have snared top-10 runs were sent packing in multi-car crashes. Just four of the small-team drivers made it to the checkered flag.

Aric Almirola spun across the finish line but still managed to score a top-5 finish (fifth). It was a run his Richard Petty Motorsports team sorely needed as they try to solidify plans for 2018.  Almirola is an accomplished plate racer with an XFINITY Series win at Talladega earlier this spring, so his run should be no surprise.

David Ragan also snagged a top-10 result, a 10th-place finish he might have needed for his future. Ragan’s restrictor-plate prowess is well known with both his Cup Series wins coming on superspeedways.

Rookie Ty Dillon got lucky a half-dozen times Sunday. His No. 13 Germain Racing Chevrolet just missed getting clipped in a few mash-ups on track. But sometimes, it’s better to be lucky than good. Dillon rode his excellent luck Sunday all the way to a career-best finish of 11th.

Another handful of drivers had strong runs going Sunday before being caught up in other people’s messes.  Chris Buescher (17th) was one of the drivers just six laps from the checkers when he got caught up in a multi-car pileup. Also wrapped up in that mess was Brendan Gaughan (19th), who had an outstanding run brewing for part-time Beard Motorsports. The wreck began with Ryan Blaney (18th), ruining a Talladega run that included 18 stage bonus points. Blaney still made it far enough to earn a tenuous hold on a top-eight points position heading into Kansas elimination weekend.

Throw AJ Allmendinger (22nd), Landon Cassill (28th), Michael McDowell (30th) and Matt DiBenedetto (31st) in here, too. All four could easily have challenged for at least a top 10 if not for a lap 171 melee that swept them all up. DiBenedetto was one of a handful of cars parked during the race for a pit road infraction following the crash.

The rest of the field was caught up in a variety of incidents as well, but none made it far enough to really say whether they might have contended.

Joey Gase (32nd) and DJ Kennington (33rd) both crashed on lap 164. Gase was done for the day while Kennington got parked for too many men fixing his car in the pits.

Cole Whitt (34th) didn’t get a chance to show whether he could overachieve this week. The TriStar Motorsports driver tangled with Clint Bowyer just over 30 laps shy of the end. Jeffrey Earnhardt (38th) and Mark Thompson (39th) had an incident just 25 laps into the day.

Finally, Justin Marks brought up the rear of the field in the part-time No. 7 Chevrolet. Marks suffered a crash after just 16 laps, hitting the wall under green-flag conditions. He also got parked for having too many crewmen working on his car in the pits.

A few days after cutting Landon Cassill loose after the 2017 season, Front Row Motorsports indicated they were still evaluating whether David Ragan will be asked back next year.  Ragan, who has the team’s only win, returned to FRM this season after running for BK Racing last season. The team addressed media at Talladega and indicated Cassill’s firing could be the first domino in a sweeping change for the team this offseason.

“There’s a lot of cards still left to be dealt and try to figure out what’s going to put us in the best place competitively as an organization. So I don’t know,” said team GM Jerry Freeze Sunday. “There may be more changes to come with some of the folks we got around our program and hopefully partners — some coming on board, new ones, and stuff that we’re talking about that I think is going to be really exciting.”

Ragan told Frontstretch in an interview published Wednesday that, while nothing was signed he was working on a 2018 return.

Meanwhile, Jeffrey Earnhardt announced at Talladega he will return to the No. 33 Circle Sport ride next year for a second season.

At Leavine Family Racing, crew chief Todd Parrott, who joined the team last season, was replaced on Monday. Jon Leonard will finish the year with driver Michael McDowell, who is being replaced by Kasey Kahne next year.  The team has not named a crew chief for Kahne.

And this is the good side. Thank @JuiceBattery_ for being with us for this crazy top10. pic.twitter.com/E2VUcI2YxW

To the lady yelling junior!!!!! Every red flag for the entire red flag. ???? You the real MVP!

I think should @landoncassill get another shot in great equipment he would get it done. His talent has improved over the last few years.

Proud of the 21 teams effort yesterday. Such a fast car. Good news is a scored a 1985 Ricky Rudd Motorcraft jacket! pic.twitter.com/gCei6coxhR

Amy, I completely agree with you about the tv guys not covering more of the drivers in the race. The short of it is the networks won’t put you on the screen and talk about you unless you pay them. We found this out first hand when we ran in the Rolex sports car series. They wanted us to pay $5000 per race to put an incar camera in our car. We declined, and we were never mentioned once in the Rolex 24, a race that we finished 10th in class out of 30 cars, and 18th overall out of 49. They only time we were mentioned was the one time we crashed. Yet, they wonder why tv ratings are sagging.

David Ragan will be asked back next year. Ragan, who has the team’s only win, returned to FRM this season after running for BK Racing last season.

FrontRow does have 2 wins though. Chris Buescher won Ponoco with them.

Thank you for saying that these lower-tier trams hardly get a mention. I can’t remember which pile up it was, but two chasers made it through it. Between those two cars were the #47 and #37. Kyle Petty said “watch how ( whoever and whoever) snuck right through there” He just completely ignored the two JTGD cars. It’s all about the chasers and it sucks.