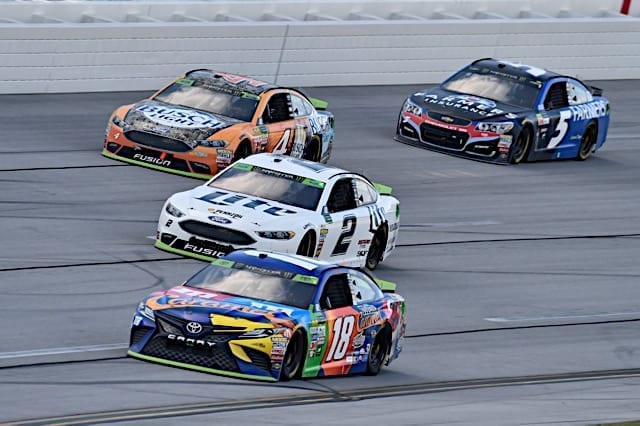 If you were looking for a wild and crazy restrictor plate race at Talladega Superspeedway sometime Sunday afternoon/early evening, you got it. If it wasn’t quite the type of racing you were hoping for … well, you’ll just have to deal with it, just like many drivers and teams are doing.

Though Talladega is no longer an elimination race in the Monster Energy NASCAR Cup Series playoffs, drivers still found themselves wiped from contention. It seemed every few laps, several cars wrecked out of the race, leaving only the last few standing for a sprint to the finish.

Was it the best way for a race to go? Maybe, maybe not. But was it exciting? That’s hard to deny. Early TV numbers may have proved that point home as a 2.75 Nielsen rating produced one of the few year-to-year increases for NASCAR this season.

If you ever wonder just how important communications are for a race, especially at a restrictor plate track, then what happened with Brad Keselowski Sunday should remove any doubt. Keselowski gave up fourth position relatively late in the race to fix radio issues. The move left him languishing for a bit in 30th place.

Keselowski admitted after his victory it was difficult to give up track position. In the end, he relented to crew chief Paul Wolfe, snuck through wrecks and somehow, it all worked out.

So, give credit to Keselowski for listening to the advice. With all the crashes that took place after that long pit stop, the communication of knowing where or where not to go was essential in this win for the driver of the No. 2 Ford.

Luckily for him, Fords were strong all day, and it showed on the final lap. Keselowski, with only a little help from teammate Joey Logano, snuck past Ryan Newman for the win. It was his fifth career triumph at Talladega.

Years ago, during his first victory in 2009 Keselowski was criticized by some for his aggression. But the days of “Good Brad” and “Bad Brad” are gone now. There’s just “in his prime Brad” who regularly races for wins these days on virtually any type of track.

I am one of many who figured Kyle Busch was a lock to be in Homestead’s Championship Four. While that is still certainly possible for the driver of the No. 18, the list of things that could derail a chance for him to a win a second championship got a lot longer after wrecking out of Sunday’s race and finishing 27th.

Busch now sits ninth in the point standings, one spot out of the eighth and final position to advance to the next round. He is now seven points behind Jimmie Johnson and nine behind Ryan Blaney. It’s true one set of stage bonuses can erase the deficit; Busch is capable of winning at Kansas Sunday.

But any number of of minor issues could keep Busch from moving on in the playoffs. It could be a loose lugnut, an unscheduled pit stop for tires, or speeding, just to name a few. So, yes, the pressure will be on the entire No. 18 team at Kansas. The yellow brick road may or may not lead to the next round for Busch.

Martin Truex Jr. is already in the Round of 8. So maybe it was easy for him to give the right answer after admitting to starting one of Sunday’s many wrecks. But Truex didn’t blame someone else for the crash, like his spotter or another driver doing something crazy. He even apologized for starting it and ruining the day for a lot of other drivers.

“Just was trying to get to the end and ended up causing a wreck, so I hate it for everybody,” he said. “We definitively had nothing to lose today. But at the same time, you don’t want to be the person that causes others problems.”

Truex could have gone a different route. Instead, he showed empathy for the other drivers (in a racing sense) even though his Charlotte win a week earlier had already advanced him. So you see, sometimes what people don’t say matters just as much as what they do say. Truex has said a lot this season by his ability to win races on the track. He’s still human, and admitting to a mistake was an admirable thing to do under the circumstances.

Ricky Stenhouse, Jr. and the No. 17 team knew Sunday at Talladaga had to be their day in order to advance to the next round of the playoffs. By their day, it wasn’t just working for a top-five finish; it was winning the race.

But it didn’t work out that way for the two-time restrictor plate race winner this time. Stenhouse was caught up in one of the 206 accidents on the day and ended up slumping to 26th. He now sits 22 points behind eighth-place Johnson in the standings.

So, barring some kind of miracle finish for him at Kansas, it will be the end of Roush Fenway Racing’s 2017 comeback story. The team has not come close to reaching its old championship-contending type of standards, but at least it was good on the plate tracks this year. Maybe that’s a start of a better future for Stenhouse and the team.

Regardless if, say, Truex runs away with a win at Kansas Sunday (which is entirely possible), there will be another race going on. Unless Stenhouse or Jamie McMurray steal a win, essentially there will be four drivers racing for the final two playoff spots.

The point difference between seventh-place Ryan Blaney, Johnson, Kyle Busch and 10th-place Matt Kenseth is just 10 points. So, it will be an every point matters type of situation. It will make the strategies at the end of the first two stages important as these drivers will be looking to get every point they can.

The stage points were big for Blaney on Sunday. He won the second stage and finished third in the first stage, vaulting him ahead of Johnson and Busch. Those kind of points will be even bigger this week. Kansas is certainly not known for giving us thrilling racing; track position will be difficult to come by. Just how each of these teams play out their strategy could provide some much-needed drama.

It’s pretty much impossible to not pick either Martin Truex, Jr. or Kyle Busch at a 1.5-mile cookie-cutter track like Kansas. So the question is, which one? While Busch will be gunning for another win in order to guarantee himself a Round of 8 spot, Truex has just been so good at these places. He’s got to be the pick. This week’s upset you might not think about pick is rookie Daniel Suarez. He finished seventh in his first race at Kansas and has shown improvement throughout the year at all different kind of tracks.

I’m so sick of hearing about points. Another gadget to get attention? Matt Kennseth was the last great Champion.