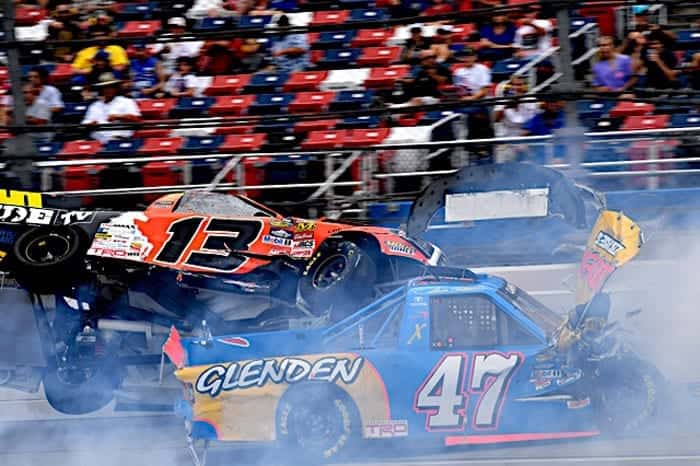 Did You Notice? … The way NASCAR’s damaged vehicle policy has affected drivers running at the end of races? Sunday at Talladega Superspeedway set an all-time high for DNFs in the sport’s playoff era (2004-present) as 26 drivers failed to finish. Only a dozen cars wound up on the lead lap.

The rate of carnage also was unprecedented since restrictor plates began full-time at Daytona International Speedway and Talladega in 1988.

It’s made for an expensive week at the shop as fabricators are busy working overtime. (The only benefit, really, is that the next restrictor plate race isn’t until next year. It’s not like these cars were going to get used at Martinsville Speedway, right?)

The bigger question is whether the demolition derby had an effect on fans watching the race. On the surface, the answer appears to be no. A 2.75 Nielsen rating for Talladega was the best for the sport in several years; it’s one of the few races in 2017 to sport a year-to-year increase. The raucous crowd roaring during multiple red flags was the loudest we’ve seen in Cup racing all year.

That said, there were a few mitigating factors. Dale Earnhardt Jr., in his final plate race ever, avoided most wrecks and was running at the finish. The specter of a possible victory certainly kept fans hanging around. Young stars like Ryan Blaney and Chase Elliott were also in contention until the final few wrecks. Their crashes happened during the final 10 laps.

Overall, NASCAR’s crash clock, plus its officiating rules, played a factor in shrinking the field. Jimmie Johnson and Matt DiBenedetto got kicked out for working under red flag conditions. Both drivers’ teams claim officials gave a green-light signal only to turn around and take it back. Justin Marks and DJ Kennington got sent home for too many people working on their cars. (That’s right. There’s a rule that states you can only have so many people fixing a crashed car.)

It all adds up to an extreme push to make sure damaged cars are out of the race, not leaving debris strewn all over the tri-oval upon their return. NASCAR believes this practice has worked well at races like Daytona and Talladega where multi-car crashes are the norm, not the exception. It would say today, “Why complain? The ratings were up, and there still were cars running at the finish.”

But Sunday just showed the potential downside of these rules. There comes a point where you have so few cars on the track it doesn’t really feel like a race, right? In the final laps of Sunday, we hit that tipping point. So could you imagine if those wrecks all happened in the first 94 laps? We’d have a dozen cars running for the next two hours without any lapped traffic. Would fans have stayed?

We could also have a situation where drivers miss the next round of the playoffs simply because of where their car landed at the end of that multi-car wreck. Kyle Busch couldn’t restart his car, Ricky Stenhouse Jr. could at least roll his straight to the garage. It’s possible that two-point swing could mean the difference in Busch moving on.

There will be more multi-car wrecks in the future where 10 cars are immediately knocked out under these rules. It could mean stopping on the backstretch instead of Turn 3 wipes your championship bid off the table.

Is that fair? That speaks to the randomness of Talladega being in the playoffs to begin with. It’s the trickiness of balancing the excitement of plate racing with the reality of its haphazard outcome.

At the very least, the sport could give a little leeway on this crash clock in the future. Maybe at Daytona and Talladega, you extend the clock to 10 minutes. Give a few more people more of a chance to get back in the race. Allow teams like Johnson or Busch to flex their muscle and prove they’re championship teams by making the gargantuan effort to get their cars back on track.

The alternative could mean a race ending with five, six or seven cars running. No matter what you think of plate racing, we can all agree 30 DNFs isn’t good for the sport.

Did You Notice? … The rookie of the year battle is still anybody’s race? Erik Jones and Daniel Suarez continue to wage a quiet slugfest for the award. Suarez, who was in contention late in Talladega, has closed to within six points, 256-250, after Jones had a sizzling summer.

In fact, Jones could have put this award away if he’d closed the deal on a dominating performance at Bristol Motor Speedway. But a second-place run left the door open, and Suarez has used the playoffs to close the gap. The driver of the No. 19 Toyota has earned five straight top-15 finishes, including that Talladega near-win, to steadily chip away at his deficit.

The tracks ahead appear to favor Suarez, too. He had seventh-place finishes at Kansas Speedway and Phoenix International Raceway earlier this year while excelling at Homestead-Miami Speedway in the XFINITY Series. Jones, by comparison, was 22nd at Kansas and Texas Motor Speedway while losing last year’s Homestead title battle to Suarez.

This one will clearly come down to the wire. The difference could be how focused Jones’ No. 77 team remains at Furniture Row Racing. The team is on the verge of its first title with Martin Truex Jr. while its second car is preparing to suspend operations. Will Jones keep getting the resources he needs to hold off Suarez down the stretch?

Did You Notice? … Quick hits before taking off.

Maybe the increase in viewers was due to the event extending into prime time. People finding the event still going on after supper probably said “Hey! the demo derby is still on.”

I’d rather just see wrecked cars out of the race than put them back on the track to give the illusion that there are more cars running. Basically, it’s a lie and anything done just to make things look good isn’t fooling anyone. Fans aren’t stupid.
I also don’t think it’s fair for someone to get points awarded for slapping their cars back together just to run one lap to get a better finish than the other 6 guys involved in the wreck. After you are involved in a wreck, you should not get credit for any laps (even caution laps) until the first green flag laps where you can prove that you can maintain the minimum speed.
If you are that worried about the attrition rate at the RP tracks then get rid of the stupid RPs and fix the real problem.

Plain and simple. The ratings were because it was Dale Jr’s last race at Talladega. He is synonymous with Talladega and Daytona. There is no such vibe with his last race at Kansas or Pocono or Michigan.

you are absolutely correct. ratings were up cause it was jr’s last run there and most people, even casual fans, knows he’s won multiple times at that track.

ratings were up because it was on broadcast tv not cable. However they were down slightly since the last time it was broadcast.

The crash rules are the same for every team, and I’ve actually been impressed how well they can repair cars during the time frame. Some pretty beat up cars and trucks made it back out this weekend (especially John Hunter Neimicheck) The only situation that made me think was Harvick who was trying valiantly to refire the car only to have the officials pull him out. If your car can fire, but your stuck in the mud and need an assist it shouldn’t be day over.

Increasing the crash clock is useless. If you can’t fix the car in 5 minutes, it will run multiple laps down anyway.
It makes no difference from a viewer perspective, if at the end of the race 15 cars battle for the win and 25 cars are DNF, or if 15 cars battle for the win, 15 damaged cars are still sneaking around multiple laps down and only 10 cars are DNF.
At these kind of races, it just happens that there are sometimes only few cars run competitive at the end. The crash clock is no factor in this.
Regarding this aspect, there where already much worse races, even in the modern era of Nascar. I remember this race, where for almost the whole race only 3 cars ran in the lead draft (and 2 of them at the end):
http://racing-reference.info/race/2002_Aaron%27s_312_at_Talladega/B