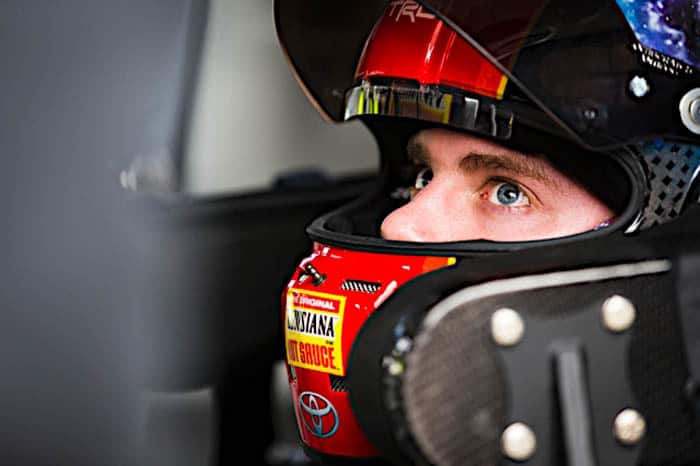 Myatt Snider is just getting his feet wet in NASCAR, piloting the No. 51 Toyota in the NASCAR Camping World Truck Series for Kyle Busch Motorsports on a part-time basis in 2017.

But the 22-year-old Charlotte, N.C. native has had racing on his mind since he was a child. Starting out in late model stocks, moving up to ARCA and now in the Camping World Truck Series, Snider has been climbing the NASCAR ladder alongside fellow youngsters and teammates like Noah Gragson and Christopher Bell.

Snider spent some time with Frontstretch at Chicagoland Speedway before the NCWTS race, where he wheeled the No. 51 Toyota to a 10th-place finish in the TheHouse.com 225.

Davey Segal, Frontstretch.com: I feel like a lot of people in the NASCAR world don’t know a whole lot about you yet besides the fact that you’re Marty Snider’s son and you drive for KBM. So tell me a little about yourself.

Myatt Snider: Well, I ran ARCA last year for Cunningham Motorsports, ran about nine races for them including all the intermediate tracks, few short track here and there. Won my first start at Toledo (Speedway), and then made three starts this year for the Camping World Truck Series with Kyle Busch (Motorsports). I’ve run Daytona, Texas and Kentucky and learned a bunch in all of those. I study physics at UNC Charlotte. So yeah, I do a lot.

Segal: You definitely stay busy. And you’re one of the younger guys in the garage. You’re 22-years old. So what’s it like to be that young and drive a racecar for a living?

Snider: It’s kind of odd, you know because of my ride with the No. 51, I got Harrison Burton and Todd Gilliland, so I’m like the old guy.

Snider: Yeah, pretty much. Lots of kids get in the Truck Series are like 18, 19 (years old), but me Christopher (Bell) and Chase (Briscoe) are the exceptions when we’re all in our early 20s, but we’re all doing what we can, driving good, trying to make a name for ourselves. So that’s what we’re here in the Truck Series for.

Segal: Your last name is familiar to NASCAR fans. Of course your dad, Marty Snider, being a longtime NASCAR broadcaster. How has he influenced your career up until this point?

Snider: I mean he’s been in this sport for probably at least 20 years, even more than that now. So he just knows how this sport works, who’s in it, who’s not. Who to trust and why to trust them. All this kind of stuff, he’s taught me a lot about this sport and what I can do to further myself in it.

Segal: I know there aren’t a lot of results to go off of in the Truck so far with only three starts, but how would you assess your performance this season?

Snider: Well, I’ve just been trying to learn about the mile and a half stuff in general. All my races this year are mile-and-a-half, so I’ve been looking forward to this one (Chicagoland Speedway) specifically for awhile because it’s the first big track I’ve gone to that’s not repaved or refreshed or anything like that. So I can actually do some racing on it. With Texas and Kentucky, the only line to run is the bottom, so when you try and race anybody, you can’t really go anywhere. But here, there’s two to three grooves you can run, you can go anywhere. I ran the ARCA race last night and you could race on the very bottom, you could race all the way up against the wall. So it’s a lot of fun. I just like this track.

Segal: Like we talked about, you have a ton of young teammates, this weekend Christopher Bell and Noah Gragson. What have you been able to learn from them so far this weekend?

Snider: They’ve had a lot more mile and a half experience than I have this season, because they’ve run the full season, whereas I’ve only run three races this far. So I’ve been asking them all kinds of different questions about how it’s like to race on a mile and a half, what different dynamics there are. And of course I’ve got some friends from ARCA all over the garage, so I can ask and lean on them. And of course there’s Kyle (Busch) too. He’s a big help, being one of his drivers. So I can always ask him for questions and he always gives really insightful answers.

Segal: Could you pinpoint anything that you’ve learned from the ARCA race last night or this weekend in general that you can take to the truck? Because there’s a ton of differences.

Snider: With his mile and a half racing, it’s all about making as much speed as you can, keeping the truck as wound up as you can. And I’ve been learning about that slowly from Kyle (Busch) and Christopher (Bell) and Noah (Gragson) and all that. Just learning from them is a big help.

Segal: You’re 22-years old. What’s it like being that young, all your friends having “normal” lives and here you are going 180+ mph for a living. You’ve gotta pinch yourself sometimes.

Snider: Well I’ve been lucky enough to grow up in Charlotte, so I know a lot of people and have a lot of friends that have the same interests and want to be in racing, so it’s easy to talk to them about stuff like this. They’re eager and interested to hear about it. But yeah, it’s kind of crazy to think that I’m doing all this before most people do anything and finish college. It’s pretty wild.

Segal: Let’s touch on Kyle Busch. What’s it like driving for him, a former Cup champion, and what can you learn from him?

Snider: He’s always at as many competition meetings that he can be, trying to teach us about different things, like pit stops, how to race somebody and all that stuff. He’s really a wealth of knowledge. Just hearing how he describes things, it’s like you have one of those “aha” moments like ‘why didn’t I think of that?’ you know? So it’s great to have him as a team owner.

Segal: Is he one of the guys you looked up to watching in the Cup Series? And if not, was there someone you grew up watching saying, ‘I want to be like that guy’?

Snider: I’ve always admired how many times Kyle won. I always looked at Denny Hamlin quite a bit since he ran the late model stock ranks like I did. And there’s all sorts of different people to draw from. I was a big fan of Jeff Gordon when I was kid. So there’s a lot of heroes that you can look to in this sport.

Segal: So now time for some funny questions. What’s the strangest thing you’ve ever put hot sauce on, and did you like it?

Snider: Believe it or not, we were hanging out at the shop earlier this year, and I brought donuts to the guys. So one of the guys was like ‘hey, why don’t we try hot sauce on it?’ So sure enough, it was actually really really good!

Segal: Come on, not actually…

Snider: I’m not even kidding. Like, it was delicious. I could find the guy and ask him for you, but yeah it was delicious. The first time I tried it it was kind of weird. Because Louisiana Hot Sauce has like 40 different flavors you can try, and one of them is horseradish. And we were shooting a commercial and I put that on a donut and that was a bad choice. But regular hot sauce is great.

Segal: I like hot sauce and all, but I don’t know if I’d put it on a donut. So how did this whole partnership come about?

Snider: They were looking to get into the sport, and wanted to go to the Cup level but just couldn’t quite put it together with a team. And they wanted something where they could get more exposure with their money and ARCA happened to work out with me for them with me. And they liked me as a spokesperson for the company, so it all worked out.

Segal: I have a couple friends that attend UNC Charlotte, but they’re not racecar drivers. What’s it like trying to earn your college degree while also furthering yourself in your racing career?

Snider: I’ll tell you right now, it’s not that easy. It’s a lit of time splitting. You just got to manage your time really intelligently. Especially studying physics. They’re both full-time jobs and I’m kind of trying to split them part-time.

Segal: It is tough balancing that work and play relationship? Because I have trouble doing so and I’m not a racecar driver so I can only imagine how hard it is?

Snider: Absolutely. It’s hard to manage your time, you got to really plan out your day. And you can’t spend any time wasting it you know?

Segal: I know you’re focused on finishing this season with KBM strong, but what’s next for you, Myatt?