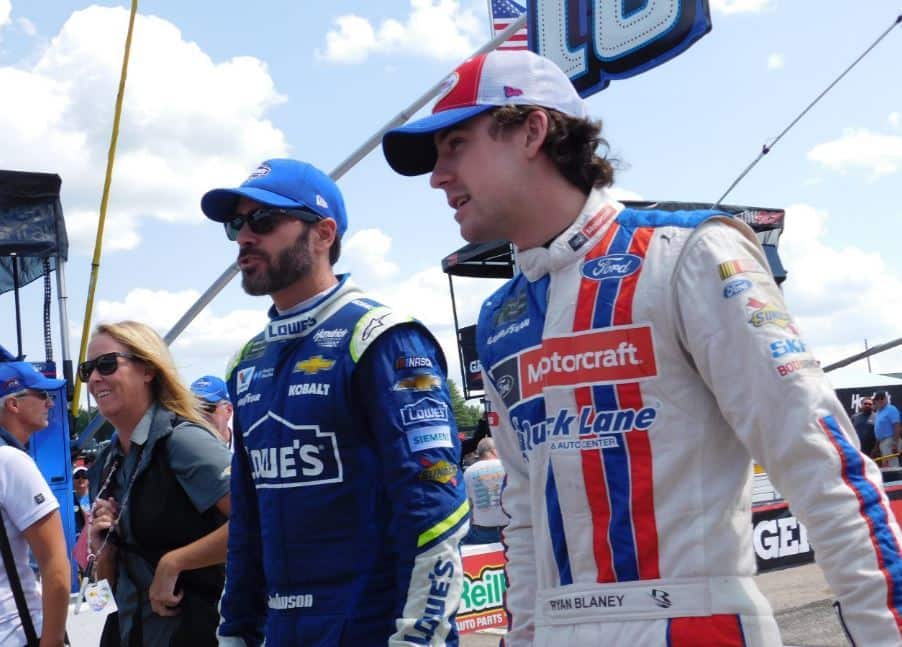 Will Consistency Be Enough for Playoff Bubble Drivers in Kansas?

There seems to be no time for these poor drivers to relax this time of the season. We’re less than two weeks removed from one of the most humid races at Charlotte Motor Speedway, followed by the insanity of Talladega Superspeedway. Now? Elimination at Kansas Speedway.

This weekend, the drivers in the Round of 12 in the Monster Energy NASCAR Cup Series playoffs will be reduced by a third, with four drivers facing elimination after Sunday’s Hollywood Casino 400. Who is most at risk, and can anyone step up their game from simple consistency to stay alive?

For this question, I’m focusing on the drivers on the bubble, excluding Ryan Blaney and Kyle Busch for a little later. Here, you’ll find a few question-mark men who could blow the world apart at the checkered flag, pull some desperate moves or struggle to their 2017 demise.

Starting from the bottom, Jamie McMurray has been praised this season for his consistency running near the front, tied for the most top-20 finishes of 2017 while also scoring 16 top 10s, his most since 2004.

However, finishing from 10th to 20th more times than not may get you through the Round of 16, but getting to the next level requires a bit more effort. And to some degree, he’s produced, with McMurray and the No. 1 crew finishing fifth in race one at Charlotte Motor Speedway. But an early wreck at Talladega proved enough to decimate his chances, and a lack of stage and playoff points certainly didn’t help.

Even with his Chip Ganassi Racing teammate Kyle Larson sitting relatively comfortable this weekend, 29 points to the good, the Missouri native is at the opposite standing, 29 points to the very, very bad — and even worse considering the track this weekend. In 21 Kansas Speedway starts, McMurray has four top 10s and only one since 2013. He may need something more than consistency to save him this time.

Next on the list is Ricky Stenhouse Jr., who just passed his best shot at advancing to the Round of 8: Talladega last weekend, where the Roush Fenway Racing driver went for a third straight restrictor plate win before crashing out on lap 171.

After finishing an OK 13th at Charlotte, last week’s DNF, his fifth of the season, continued a streak of 14 races without a top 10. Yeah, numbers like that won’t cut it. In fact, if it weren’t for a third-place stage finish at Dover International Speedway, he would’ve been out in the first round.

Playing with house money, Stenhouse wasn’t able to ride the lightning at Talladega, sitting 22 points behind the cutoff this weekend. And with no top 10s in nine Kansas starts, he could be a non-factor on Sunday.

The final two with the largest questions marks this weekend are past champions with strong numbers at Kansas. Jimmie Johnson recently won there in 2015 and has shown a bump in performance this playoffs — no wins, but a top five at Dover ended a long streak without one. But two bad runs in the Round of 12 have put the reigning title holder only seven points to the good, a.k.a. less than a stage win worth of points.

Sunday will be a test for team No. 48. Can it deliver while on the edge? It’s been done before, but a win on Sunday would be off the norm from its performance in 2017.

Matt Kenseth is the final driver, as he sits eight points behind the cutoff 10th in points. He may have been one of the 14 who saw the finish at Talladega last week, but an 11th-place finish at Charlotte puts him in that consistency-only category. In other words, simply not enough. But like Johnson, Kansas is a great track for the former champion, who has dominated two of the last four races, leading 272 total laps. With two wins and 14 straight top-15 finishes there, it seems Kenseth will at least be in a comfortable place.

Is Kyle Busch Truly in Trouble?

Boy, nobody is safe, huh?

Kyle Busch is half of the dominant duo of the 2017 season alongside Martin Truex Jr. Together, they have 10 wins, 32 stage wins (half of the season) and 3,654 laps led. Nutty.

But despite these numbers, the two are on opposite sides of the spectrum, with Truex confirmed into the Round of 8 with the Charlotte win while Busch is currently in elimination zone after crashes at both Charlotte and Talladega.

Is Busch done or can he put himself back in the title hunt? If this were 2014, most would assume he was undeniably screwed. That’s because Kansas was an evil place for Busch for a few years, crashing out of the race violently three straight times from 2013 to ’14. Additionally, the Las Vegas native had nine finishes outside the top 20 in his first 14 starts.

But these numbers have flipped the last three years. Out of nowhere, without much cause or reason, Kansas is one of Busch’s best places nowadays. Coming into Sunday, Busch has five straight top-five finishes at Kansas, including a win in 2016.

With stats like these, it’s a welcome sight for Busch after a disastrous Round of 12 destroyed his point cushion earned from the regular season. In fact, his streak of finishes outside the top 20 (29th and 27th) is his worst streak of finishes all season.

But is it due to poor performance? It doesn’t look like it, as Busch was among the best cars early at Charlotte and was just a victim in the Talladega Big One. Before that streak, he had back-to-back wins at New Hampshire Motor Speedway and Dover. Oh, how quick things can change.

Sitting only seven points to the red behind Johnson, Busch has a lot to put behind him and much to chase ahead toward his second Cup championship.

Will Ryan Blaney Step Up to Advance? Does He Have To?

The last driver with all chips on the table Sunday is Ryan Blaney. The second-year Wood Brothers Racing driver has had his peaks and valleys in 2017 but is in the green for the elimination race at Kansas, nine points up on Kyle Busch.

The playoffs have seen some surprises and disappointments from the No. 21, but overall, it has proved to be enough to advance through. But will it stay that way? Following a bitter loss last week at Talladega, Blaney, who led 27 laps on the day, spent the finish in the garage, still earning a not-terrible 18th-place finish. However, with finishes of eighth, 23rd, ninth and 11th the playoffs, there seems to be something important missing, something we saw more of early in the season.

Where has dominating Blaney been? The guy who controlled the field at Texas with 148 laps out front, drove with power at Kansas from the pole position and 83 laps led and delivered victory at Pocono a few weeks later?

Would you be surprised to learn that first-career victory was also his most recent top-five finish? Who would’ve thought?

Well, that’s the position the North Carolina native is in. Perhaps he delivered too much too early? Ran out of gas in the summer months? Whatever it is, it’s becoming more and more prevalent as the playoffs continue to narrow its walls.

This dip hasn’t been bad enough to put Blaney in a McMurray- or Stenhouse-type position where he needs to gain double-digit points to stay alive. Blaney has a little cushion with eight points and only has to keep himself above a few certain playoff guys to be OK. Easy enough.

It may be easier than ever looking at his short-but-successful past at Kansas. Making his Cup debut here in 2014, Blaney has made it a happy place since, finishing fourth from the pole in the spring. He also scored his first non-plate top five with the Wood Brothers there last year, finishing fifth.

Blaney, sitting in tight space with Johnson, Kyle Busch and Kenseth, lacks some experience there but has proven to be reliable in certain areas they are not. And it’s been enough to keep him afloat in this playoff battle… so far.

Ferrari is hurting. Its championship hopes that once seemed real, near and without much doubt now lack all three as a lack of luck, execution and judgment has nearly ended the fight with Mercedes and Lewis Hamilton for the Formula 1 World Championship.

Four-time champ Sebastian Vettel has never lost a title in a year he led the points. That looked to be continued, as the third-year Ferrari man started the year with two wins in the first three races and six straight top-two results. After round six at Monaco, the German had a full-race point gap over Hamilton (25). It was looking great for the red team, which haven’t won a title in 10 years.

But it all hit the ground hard at Singapore a few weeks back when both Vettel and teammates Kimi Raikkonen crashed out in Turn 1. That dragged Vettel from three points back 28 after Hamilton scored the win that night.

Starting the Malaysian Grand Prix from dead last, Vettel put on a terrific drive on the afternoon, advancing to a powerful fourth-place effort. Still, a loss to Hamilton, who finished two spots further up.

But perhaps Vettel’s title truly hit rock bottom in the garage area two weeks ago at Suzuka Circuitland, where a faulty spark plug ended his day on the fourth lap. A worst-case scenario saw Hamilton win again, exploding out to a 59-point gap coming into the U.S. Grand Prix in Austin, Texas, this weekend.

In a long-anticipated championship battle among two teams instead of one, there is a chance it could be wrapped up mathematically in Sunday’s sixth grand prix at Circuit of the Americas. If Vettel finishes outside the points (a top-10 finish), all Hamilton must do is finish first or second and the fourth title is his.

How likely is this to happen? Based off track history, very. COTA is a prime place for Hamilton to get the job done, as he has won four of the five races ran there, including the last three. On the season, he has stood victorious in four of the last five races, excluding Max Verstappen’s bold win in round 15 at Malaysia.

Can Hamilton win again in COTA and perhaps even sweep the remainder of the season? The Brit has been shocked on how this championship has turned in his favor the last few races. If that continues, it could be a powerful drive home for the Mercedes man once again.