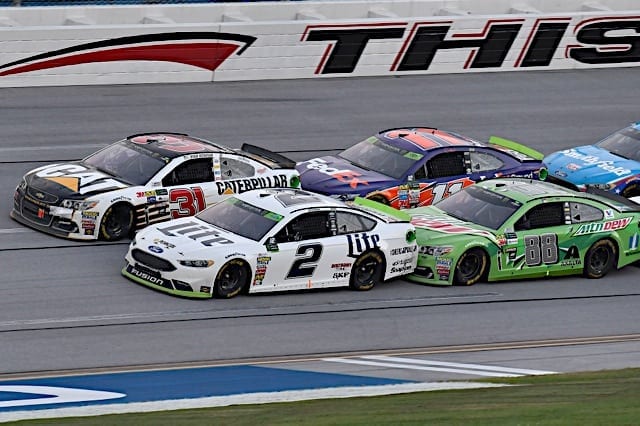 For a while there last Sunday (Oct. 15) at Talladega Superspeedway, it looked like Dale Earnhardt Jr. was going to do it.

In his final start at his best track, in front of the strongest crowd in years at the 2.66-mile superspeedway in Talladega, Ala., Earnhardt dodged wreck after wreck, barely unscathed but ready for another run to the checkers.

That his final start came 17 years to the day that his father won his final Cup race ever (at the same track, no less) was lost on no one, and despite leading seven laps early on, it looked like Earnhardt was saving his best for last. With only 14-or-so cars competitive for the final three-lap stretch of the race, and most major contenders knocked out, well, he was bound to win, right?

What most of the fans in the stands and watching on TV didn’t know, however, was Earnhardt had just enough damage to make his car tight in the turns, something that would ultimately doom his hopes as those who knew his car was “wounded,” as he said after the race, didn’t want to work with the six-time Talladega winner.

It was a little bit of a throwback, to a time when the slightest ruffle of sheet metal meant your day was likely done at a plate track. Certainly you could be fast, but not fast enough to win. Those were the days that Earnhardt flexed his drafting muscle, and at this track in particular. He won four in a row and five of seven from 2001-2004, and teammate Michael Waltrip added another victory in 2003. In those days, the entire Dale Earnhardt, Inc. contingent was strong, winning 11 of 16 plate races during that stretch and finishing second in more than one as well.

On Sunday, as Earnhardt raced in his final plate event ever, it wasn’t he but the driver carrying a tribute scheme for Earnhardt who won the race. Brad Keselowski, once Earnhardt’s protégé, clinched his spot in the Round of 8 with his fifth victory at the track. And for those paying attention, Keselowski’s win further cemented Team Penske’s status as the premier plate racing team of the current field, much as DEI was in the beginning of the millennium.

Think of this: Keselowski and teammate Joey Logano have combined to seven of the last 13 plate races, including the last four fall races at Talladega and four of the last five races in total at the track (only Ricky Stenhouse Jr. bested them). In an era where parity, especially at the plate tracks, is at an all-time high—not to mention the bigger Big Ones knocking out more of the field—this is a truly significant stat.

It’s no wonder that Keselowski has won on plate tracks so much. He was, after all, a member of JR Motorsports for a year and a half, soaking in everything the pied piper of plate racing could teach. It was an extreme surprise to everyone when he took the checkered flag in just his fifth-ever Cup start for Phoenix Racing, but adding four more Talladega victories since then shouldn’t be.

Keselowski is the undisputed plate king now, succeeding Earnhardt for a rival team after being denied a full-time Cup ride at Hendrick Motorsports in the early 2010s. Back then, it looked like he’d take over the No. 5 car, but with Mark Martin willing to give it another shot, Keselowski was left a free agent.

Roger Penske snapped him up, and he’s reaped the benefits since then; prior to Keselowski’s 2012 victory in the spring race, The Captain had only one restrictor plate win on his resume, the 2008 Daytona 500 with Ryan Newman. He has eight since that early 2012 victory.

It’s odd that such an iconic owner wasn’t victorious more in the draft prior to Keselowski coming on board, but the fickle nature of plate racing means surprise winners, early exits and years of frustration. It takes a special driver to make it happen, luck and skill in equal measures.

Dale Earnhardt Jr. had it. Brad Keselowski has it.

And everyone gets to witness history.