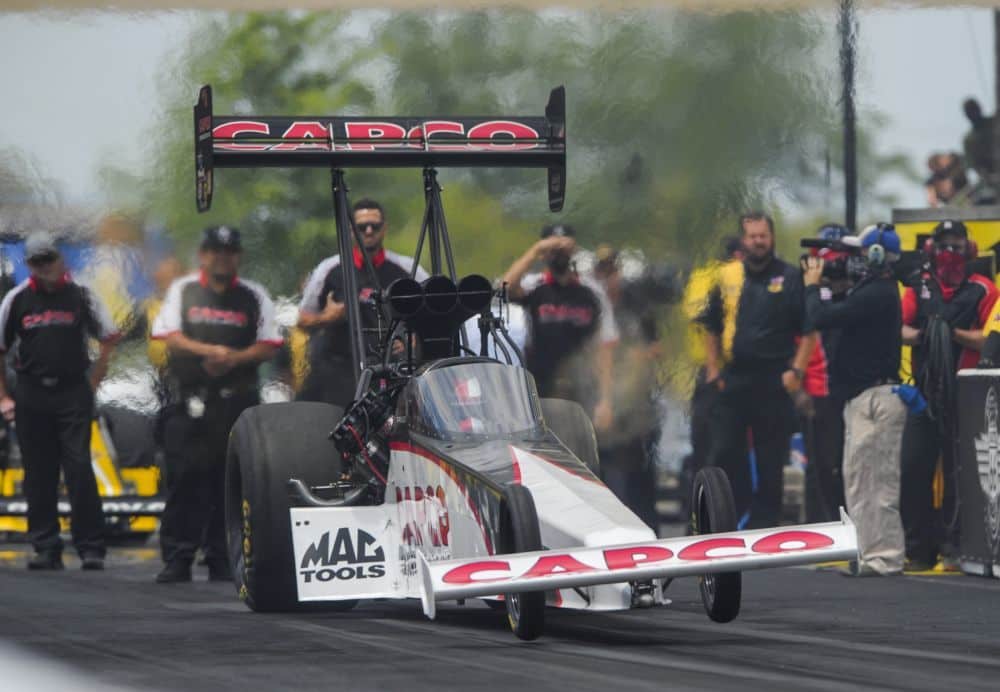 In case you were under a rock somewhere and missed the highlight reel from last weekend’s AAA Texas NHRA FallNationals, Top Fuel points leader Steve Torrence blew a left rear tire on his dragster, which catapulted him straight into the wall, destroying his car in the second round of eliminations.

With Torrence done in the second round, the door opened for the drivers behind him to gain ground in the championship race, right? Nope. See, in NHRA if a team has a backup car and if a team is able to get that car prepared and inspected during the turnaround period between rounds, that team may continue the event, not just during qualifications but also at any point in the weekend, including during eliminations.

Torrence had such a car in the trailer, and after a mad thrash the team was able to prepare and present that car for competition in time for Torrence to line up for a semifinal run against eventual event winner Brittany Force. Unfortunately, it was much effort for little result; Torrence may have lined up for the run, but the engine on the backup grenaded during the pass — a result, according to Torrence’s crew chief Bobby Lagana, of having to prepare the car in such a hurry and a decided lack of time to double check that everything was assembled correctly.

So many points of discussion here, where to start? First, no, it hasn’t always been this way. NHRA used to be just like all the other motorsports bodies in that if you wrecked in qualifying, you could pull out your backup car, but on race day, if you wrecked, you were done. This was a change put into place, particularly after the start of the FOX Sports TV deal, to make race day more exciting, according to the NHRA’s senior vp of racing operations, Graham Light. Or, in other words, to keep the big stars on the track as much as possible, because they will be the ones who are more likely to have backup cars on hand.

Is this a good or bad idea, however? It certainly breaks with tradition, something that is always a touchy proposition. Race fans tend to be purists. I would never be in favor of this in a long-format race where cars run laps to a distance. Can you imagine having a big wreck at Talladega Superspeedway and then having 15 teams suddenly come out in a fresh car? Or doing this at Indianapolis Motor Speedway? No, that would never work.

Drag racing is different, though, for several reasons. Everyone has, in essence, a fresh car for every pass because the cars are torn down and rebuilt between rounds. It’s not like NASCAR where teams can make adjustments to tires or track bars but the set up in the car is pretty much what you have for the day. If a team is off base in NHRA, it can change whatever needs to be changed between rounds. Engines are also completely refreshed or, if needed change, already a difference between drag racing and oval racing where engine changes during a race are not allowed. So really, why not the rest of the car if it’s absolutely necessary? It’s not that big of a leap.

Lagana raised some valid concerns about the amount of time the team had to prepare the car and whether the result of all that hurried work was safe, but the thing is, I don’t think that’s something that can be laid on the doorstep of the NHRA entirely. The amount of time to turn around the cars between rounds is really just part of the game, not just in NHRA but in drag racing as a whole. NHRA is perhaps a little more efficient at enforcing that turn around time, calling drivers to the lane and then staying on schedule, no matter who doesn’t show up, as opposed to calling and then calling again and again until they show up. NHRA holds up the show for no one, but the concept is still the same across the drag racing world.

Additionally, Torrence’s team did not have to pull out and prepare the backup car, nor run it if it didn’t feel it was adequately prepared. It chose to do so, or at least Torrence did. This is an option, not a requirement. Then again, sometimes it is the job of the sanctioning body to protect teams from themselves. If you allow it, some of them will most certainly do it, even if they know it could be a safety issue. I wonder if that was a conversation the Capco team had going into round three.

So the bottom line is, should teams be allowed to bring out a backup car during eliminations? What do you think?

Here is both the second round crash and the third round explosion for Steve Torrence last weekend in Texas.

NHRA has announced there are seven drivers in the running for the 2017 Automobile Club of Southern California Road to the Future Award, given to the top rookie competitor among the four NHRA Mello Yello Series classes: Top Fuel, Funny Car, Pro Stock and Pro Stock Motorcycle.