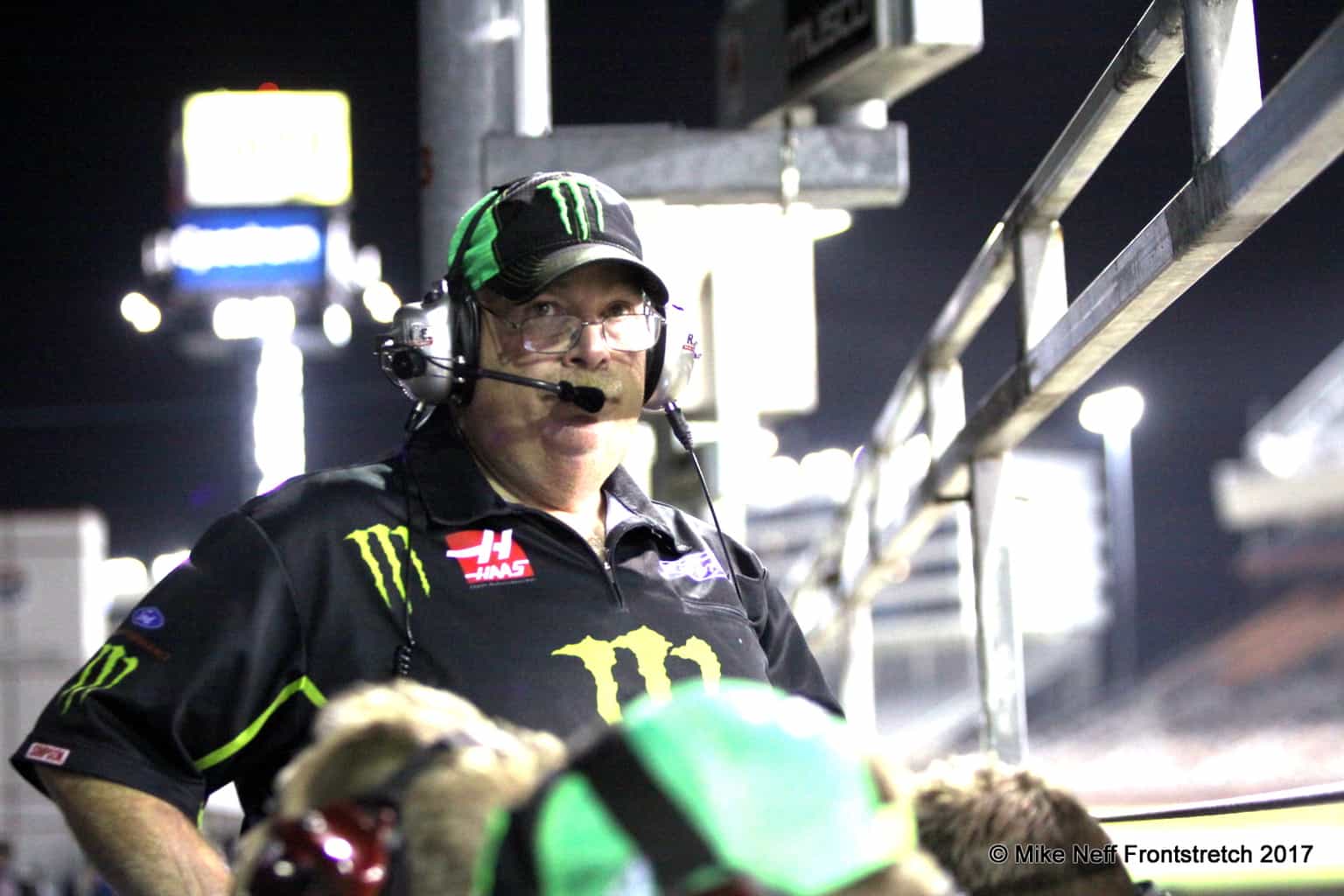 The food processor that was Talladega Superspeedway chewed up and spit out more than 30 cars on Sunday. Unfortunately for Tony Gibson, his No. 41 Stewart-Haas Racing Ford driven by Kurt Busch was one of them and he ended up with a 25th-place finish. Heading into Kansas Speedway, it is back to trying to create downforce and not as much about the drag of getting the car through the air.

In Tech Talk this week, Gibson talks about the minimal amount of chassis movement that occurs at Kansas on the super smooth race surface. He also touches base on rear end shims, front end geometry and pit strategy. He also gives you a little insight into the mentality of a tire test and how they went about attacking the roval tire test at Charlotte Motor Speedway.

Mike Neff – OK, we’re coming off Talladega. We hear a lot of people clamoring for old-school racing. That was absolutely old-school Talladega with about nine cars running at the finish. You were there for most of the day, but in the end, it wasn’t quite what you wanted. How’d you see your day?

Tony Gibson – No, we had a really fast Monster Ford for sure. We showed a lot of speed off the truck, qualified fourth, had to start at the back and drove right to the front. We led some laps and ran top three or four all day. It was definitely a car to win the race with, that was for sure. We were just in the wrong place at the wrong time. We actually got hit from behind there, and we had no idea that was coming.

It is just one of those deals. It is Talladega and restrictor plate racing. You can’t really foresee that. You know it is coming but you can’t say when it is the run where you need to go to the back, or I need to do this, that or the other. It is tough to swallow when you have a car that fast. We’ve had really fast cars here throughout the playoffs and everything. We’ve just had horrible luck and pit road penalties and things that have just taken us out of everything. Our cars have been fast, and we’ve had speed. We’ll just keep working on that, and maybe our luck will turn around here and we can get a win before the end of the season.

Neff – As far as Fords at plate tracks, in looking at it this weekend, Fords have won the last seven plate races. Is it all about the body or is there more to the underside as well on those cars?

Gibson – A lot of it is Doug Yates and the engines. They’re really strong on their restrictor plate program, obviously. I think the Fords just work together better as a group. All year long we’ve had a plan with the Penske guys. We kind of practice together, we pit together and we try to get through the stages together. At the end of the race, if we can help each other we do, if not then it is everybody for themselves. We try to help one another as a manufacturer. I think that is why they are so strong is that everybody works together extremely well, on and off of the racetrack.

Neff – Now we head off to the middle of America, in Kansas. That track is so smooth; does it afford you the opportunity to be extra aggressive with suspension travels when you get out there?

Gibson – Yeah, we’ll slam it down on the asphalt and treat it like a go-kart or an IndyCar. You still have to handle though so you can’t be too rigid on the mechanical side of things. You have to have some compliance and give in it for when the tires will burn off and get hot. It is one of those tracks where we’ll just slam it down onto the earth and see what king of raw speed we can get out of it.

Neff – During the rain delays at Charlotte I was speaking with some crew chiefs. One of them told me that, on a smooth track like Kansas or Indianapolis Motor Speedway, you’ll travel the chassis about four tenths of an inch. Is that accurate?

Gibson – Yes, that’s very accurate. It isn’t a lot at all and it will be less than that at Kansas. Places that are really smooth and flatter. Charlotte still has the big bump going into Turn 1. We have to pack our things up to get across that bump. Places like Kansas and Texas that are so smooth and don’t have the huge bumps, we can get more aggressive and travel even less than that.

Neff – With not traveling very much at all on the track at Kansas, does that change the way you attack the track with the suspension in the front of the car? Not knowing the particulars of Ackerman steering and things pertinent to that, but with the way the A-arms swing and move up and down.

Gibson – You just fine-tune your cambers. Usually the Ackerman and the toe things, that is all fed off of the tire and what the data for the tire shows you for camber curves and slip angles and things like that. It is such a small amount, from track to track, with these mile-and-a-half tracks, other than the rough ones like Atlanta and Chicago. It isn’t a whole lot different. The tire dictates a little different camber and front end settings more than the travel.

Neff – Taking a look at the rear of the car, that has been a big focus on the tech inspection side of things this year. As far as setting up for the track, do you change much in the way of shims between the truck arms and the rear end based on the banking of the track or is it more just on how the driver wants the car to handle?

Gibson – It is more about what the car needs to drive well. Truck arm split and things like that are pretty much driven by what the driver needs for a balance change. Things don’t move a lot like they did before so it is basically fine tuning those things now.

Neff – Due to the fact you’re out of the playoffs now, does that change your strategy on attacking the stages since winning Stage 1 and 2 does nothing for you and everything is about getting the win at this point?

Gibson – They mean a little bit obviously, because you still want to finish as high as you can in the points. You can get all of the way to fifth place. Getting points goes to the end-of-the-year deal. You’re trying to get as many as you can, whether you’re in the playoffs or not, you still want that tally of points. That just helps you with the end-of-year point deal. If you’re in a fight over fifth or sixth and it came down to who has the most bonus points, that comes down to a lot of money at the end of the day at the end of the season for the points deal. I think you try to win and get as many stage points as you can and try to win races along with it.

Gibson – Usually it is two or three that our aero group spends in the wind tunnel. Sometimes we move days around or do different shifts if we need to be in there more. Whatever it is we are usually in there two to three days a week.

Neff – Is it helpful that your team owner also owns the wind tunnel?

Gibson – It is definitely a plus but we’re still a customer, too. We have to pay for our time and get into the scheduling just like everyone else does because there are a lot of people who go there now. It is a business so they have to be fair to all of their customers. Maybe we understand it a little bit better just because we’ve been using it a lot longer. I think that has a little bit more benefit than anything.

Neff – You were at Charlotte doing the tire test for the roval. Did they come up with anything close to what they think they’ll run for the race next season, or was this test just to gather baseline data to develop the race tire?

Gibson – I think it is a preliminary test. I think they have a pretty good idea already after what was run yesterday. They made some longer runs today. They narrowed it down to two or three different tire combinations. Then, the four cars at the track ran a different combination for 25 laps. Then they’d move that combination to another car and vice versa. Then they got feedback from the drivers. At the end of the day they’ll come up with a tire that everybody seems to be the happiest with. Then they’ll come back with that tire for a confirmation test and have more cars come and confirm that is definitely the right tire. By the time they leave here I believe they’ll have a pretty good idea what they need.

Neff – When you went over for the test did you lean toward a Watkins Glen setup or a Sonoma setup?

Gibson – We had no idea when we got here. We didn’t know anything. We’ve been changing gears a lot, transmission ratios and brakes. Setup wise we have been all over the map. It is kind of a mixed bag. A little from Watkins Glen, a little from Sonoma, it is kind of a strange race track layout. We’ve got the high-banked stuff we’ve got to run in as the speeds are pretty high in those zones. It is kind of a mixed bag of everything where we are right now. I think that will change a little bit when we come back and a lot more cars run on it. We’ll see if they change some things with the track or not. It is not one setup for sure.