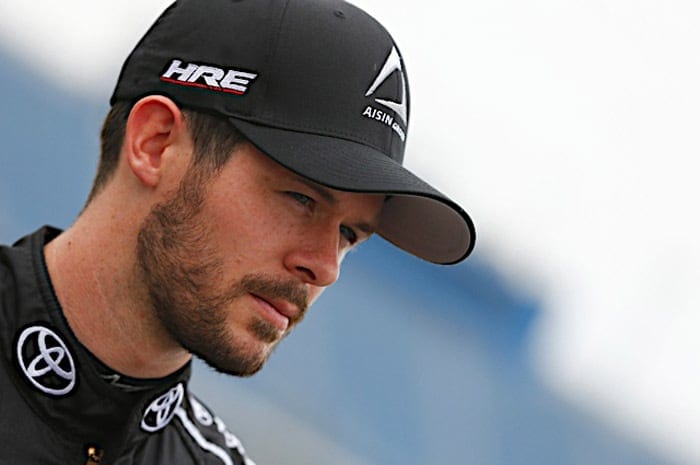 A few weeks ago at Las Vegas Motor Speedway, Ben Rhodes finally found his elusive first career win, something that many expected to happen much sooner than it did. The sophomore driver came the closest to Victory Lane at Kansas Speedway earlier this season when he engaged in a spirited battle with Kyle Busch for the lead and was driving away before a piece of debris went through the nose of the No. 27 Toyota and caused an engine failure with seven laps remaining.

Rhodes was just the third first-time winner this season (Kaz Grala, Austin Cindric), a number that’s relatively small compared to years past. But he’s far from the only driver people have expected to make that first trip to Victory Lane.

Ryan Truex likely leads the list for most people who have watched his performance this season. Sidelined from a scheduled full-time effort last year due to a lack of sponsorship, he entered this year fully funded and able to really focus on improving the single-truck performance for Hattori Racing Enterprises.

That improvement became much more evident following the extended break between Martinsville Speedway and Kansas, when the No. 16 team returned to the track with a brand new truck. After starting the year with finishes of 28th, 13th and 10th at Daytona International Speedway, Atlanta Motor Speedway and Martinsville, respectively, Truex returned to Kansas with a sixth-place finish. That was the beginning of a five-race stretch of top 10s that led to a trio of results of 20th or worse.

Since Pocono Raceway, the 12th event on the schedule, he has finished out the top 12 just twice (16th at Bristol Motor Speedway and 28th after a crash at Talladega Superspeedway).

Joining Truex is Chase Briscoe, who came oh-so-close at Texas Motor Speedway in June. When Timothy Peters went flipping down the frontstretch with just two laps remaining, the driver of the No. 29 was barely edged by Christopher Bell at the time the caution flew, and he was left to settle for a second-place finish, following that up with a runner-up result at Gateway Motorsports Park in the next race after leading 88 laps.

Briscoe is essentially auditioning for a ride for the 2018 season somewhere in NASCAR after an announcement earlier this season that his current team, Brad Keselowski Racing, will shut its doors at the conclusion of the 2017 season. Despite a trio of runner-up finishes and 11 top 10s in 19 starts, a trip to Victory Lane would sure turn more heads, especially since he was just eliminated from championship contention at Talladega.

Interestingly enough, another rookie sits on the list of those many expected to find success this season in the form of a first career win. Noah Gragson, who pilots the No. 18 Toyota for Kyle Busch Motorsports joined the organization for 2017. Despite a trio of pole starts and laps led in five races this year, Gragson has yet to seal the deal and find Victory Lane, something that comes as a bit of a surprise to many who expected him to win this year, especially with the strength of KBM equipment behind him.

Summer was very kind to the rookie, though, as he rattled off seven straight top-10 results before that run was derailed by a crash a Pocono.

What many may not realize is that he’s going through the typical rookie growing pains as he learns to not overdrive the truck and let the track come to him. Since that crash, he’s finished in the top 10 just three times in the last seven races, but the simple fact that he’s running KBM equipment puts him on the list of those that are expected to snag a first career win as the season begins to wind to a close.

With just four races remaining on the schedule, time is running out for each of these drivers to make their way to Victory Lane for the first time, and the strength of this year’s title contenders, all of whom have won a race already, means they’re going to have their work cut out for them.

But with that said, now it’s more important than ever for them to really show what they have to offer, especially for those whose 2018 plans haven’t been solidified just yet.

“Christopher has proven himself at every level of racing and we are excited to have him run full time in our XFINITY Series program starting in 2018,” said Joe Gibbs, owner of Joe Gibbs Racing, via a team release. “He has shown great maturity both on and off the track and we think he is ready for this opportunity. We look forward to watching his continued progress in the sport.”