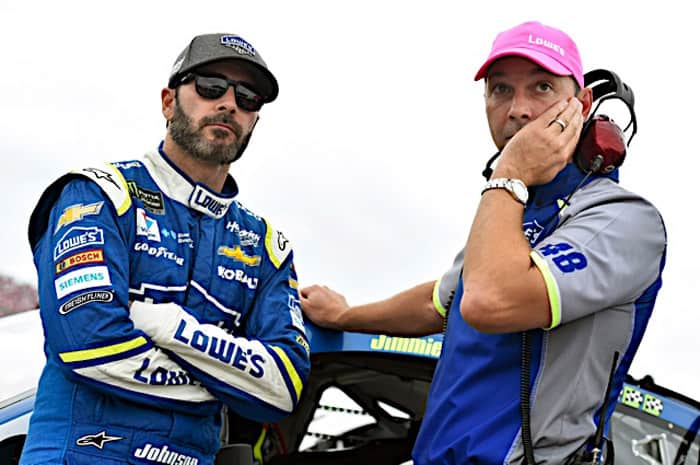 Last weekend at Talladega Superspeedway, seven-time Monster Energy NASCAR Cup Series champion Jimmie Johnson found himself in the middle of the ninth caution with damage to the No. 48 Lowe’s Chevrolet.

Though the damage appeared to be something the team could bounce back from, a move to begin work on the car while the race was still red flagged saw NASCAR park Johnson, which resulted in a 24th-place finish, a result that possibly could have been much higher, especially given only 14 cars running when the checkered flag flew.

“There are lessons learned in everything,” Johnson said. “When I think of the Charlotte pit stop itself and I think of Talladega and the mistake there that Earl (Barban, spotter) made and really all mistakes come from guys trying as hard as they can.

“The guys are just trying to do the best job they can and everybody makes mistakes. I mean, I make plenty of them, and I think Fridays show that on a regular basis. It’s hard for me to jump on somebody over that. What I ask of myself is to learn from those lessons and try not to repeat them.

“People make mistakes,” he continued. “We just have to go out there and finish where we are supposed to and if somebody gives us a chance, man we’ve got to knock it out of the park then.”

Despite the setback and his position just seven points above the cutoff line with elimination looming, Johnson remains optimistic for his chances this weekend.

“During the week it’s easy to get frustrated at the start of the week reliving what happened, but we are a team and a group that thrives on adversity,” Johnson explained. “Whenever we have been backed into a corner we have always stepped up and have delivered. All the members of this No. 48 team love a challenge, and we are not even close to losing that desire and that fight to be out there and compete and race for the win and race for the championship.

“It’s been a tough year in some respects. The speed department has been a little tough on us. I think we have been frustrated through the summer months and that yielded poor results and we really seem to be on the right track here the last few weeks and running competitive and collecting points, which is important.”

Johnson has three wins and 17 top 10s in 22 starts at Kansas Speedway, and earlier this year, he finished 24th after starting 29th. The driver of the No. 48 was 14th-quickest in opening practice on Friday.