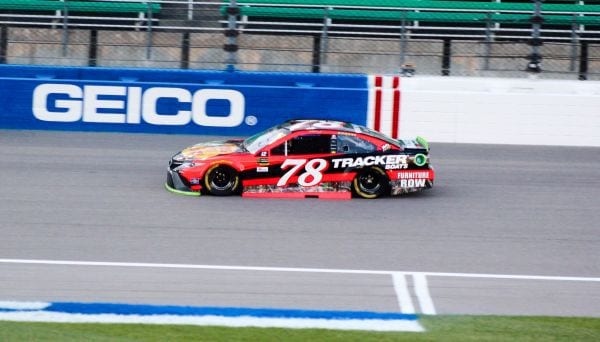 Martin Truex Jr. scored his third Monster Energy NASCAR Cup Series pole of the season and his 15th in his career Friday evening at Kansas Speedway, posting a lap at 188.029 mph.

Truex will lead the field to the green in Sunday afternoon’s Hollywood Casino 400 with Kevin Harvick  starting on the outside pole. Ryan Blaney and Matt Kenseth make up the second row, while Denny Hamlin rounds out the top five.

Rookies Daniel Suarez and Erik Jones will start sixth and seventh, respectively. Kyle Busch qualified eighth, followed by Jamie McMurray, whose team scrambled to get the No. 1 Chevrolet through inspection as the first round began.

“It’s pretty common now,” McMurray said when asked if he was nervous about making it through inspection in time. “The whole LIS machine we rolled through, I don’t know, four times earlier today and had no issues, didn’t change anything because we didn’t have an issue, so you don’t know when you got your bad read.”

Clint Bowyer rounds out the top 10. Jimmie Johnson, who currently sits seven points above the cutoff line, didn’t make it out of the second round and will start 13th.

“Certainly, we want to be better than that,” Johnson said. “But, when I look at the fact that I out-qualified my teammates, we got faster through the rounds, starting closer to the front than we have in quite a few weeks, there are some good takeaways from today.

“Qualifying, as we all know, isn’t my sweet spot and I’m trying so hard to get better at that. This is a good week for me and we’re trying to discover some things to get better. I think I can say I’ve gotten a little bit better.”

Meanwhile, Ricky Stenhouse Jr., who is one of the four drivers currently below the cutoff line, didn’t advance out of the first round and will start 25th.

Qualifying for this race was particularly important because it also decided pit stall selection for next week’s race at Martinsville Speedway when drivers will set the starting lineup Sunday morning before the race, leaving too tight a window to get pit road set up.

Derrike Cope failed to make it through pre-qualifying inspection and did not post a time. He will start 40th.