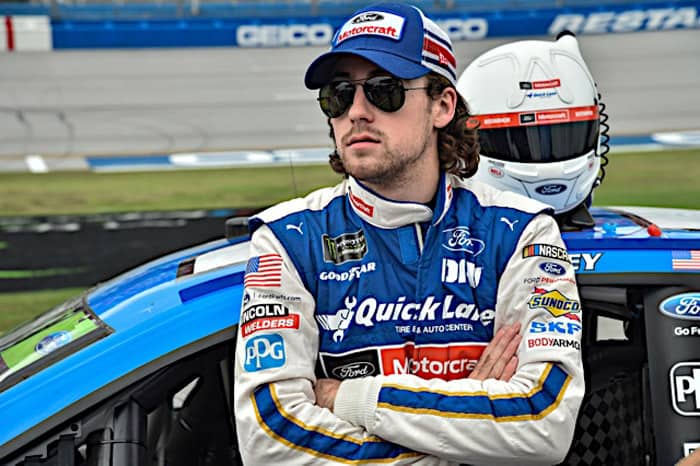 The first session ran from 11 – 11:50 a.m. ET and Kyle Larson topped the charts with a top speed of 181.671 mph (29.724 sec). By comparison, the pole speed set by Martin Truex Jr. on Friday was 188.029 mph. Kevin Harvick was second quickest, followed by rookie Daniel Suarez. Paul Menard and Clint Bowyer rounded out the top five.

Ryan Blaney, whose qualifying time was disallowed on Friday after failing inspection, was sixth quickest, while Chris Buescher was seventh. Kyle Busch and Matt Kenseth ended the session eighth and ninth, respectively. Polesitter Truex rounded out the top 10.

The second session ran followed XFINITY Series qualifying from 1:30 – 2:20 p.m. ET. This time, it was Blaney who led with a fast lap of 182.057 mph (29.661 sec). Kyle Busch ran second-quickest, followed by Harvick. Suarez and Kenseth rounded out the top five.

Bowyer finished the session sixth on the charts, followed by Erik Jones. Larson, who led practice earlier in the day wound up eighth. Brad Keselowski and Jamie McMurray rounded out the top 10.

Five playoff drivers didn’t crack the top 10 during the final practice. Truex ended up 12th, and Johnson was 14. Hamlin and Elliott ran 19th and 20th, respectively. Stenhouse, who slapped the wall late in the session, causing minimal damage to the No. 17 Ford, was 22nd quickest.

Late in the session, Daniel Hemric took a few minutes to get fitted into the No. 27 normally driven by Paul Menard. He’ll be on standby as Menard and his wife await the arrival of their baby, who is due any day now.

The Hollywood Casino will run Sunday afternoon at 3 p.m. ET.