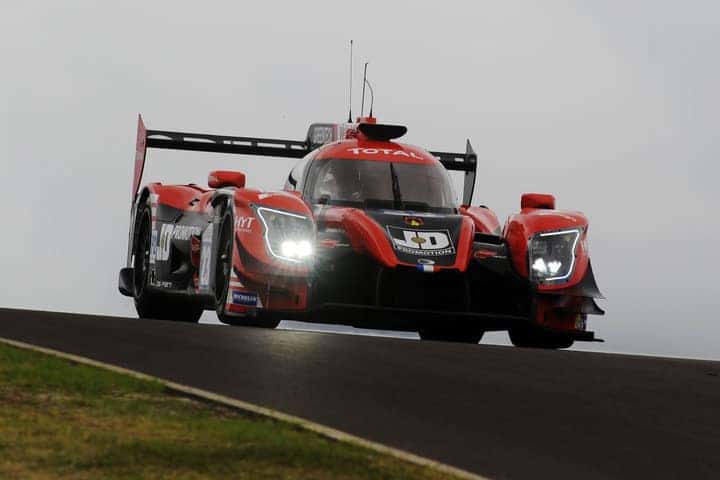 On Saturday, Panis Barthez Competition’s Nathanaël Berthon claimed the overall pole for the European Le Mans Series’ 4 Hours of Portimao.  It is the first-ever pole position for the Ligier JS P217-Gibson package.  The previous five ELMS pole positions had all been won by ORECA 07-Gibsons and the FIA World Endurance Championship’s LMP2 is nearly completely filled with ORECAs outside of Le Mans.  Berthon’s previous best qualifying effort with the team was a fourth at the Red Bull Racing back in July.

After claiming the pole position, Berthon was overjoyed.

Berthon’s lap of 93.575 seconds (111.222 mph) was more than a half a second faster than DragonSpeed’s Nicolas Lapierre.  Ryo Hirakawa was third fastest in the DragonSpeed-operated G-Drive Racing ORECA.  GRAFF’s Enzo Guibbert will start fourth, while United Autosports’ Filipe Albuquerque rounds out the top five.

The qualifying sessions were marked by a number of red flags.  The 10 minute LMP2 session was stopped three minutes in when Andrea Pizzitola spun the No. 25 Algarve Pro Racing Ligier into the trap.

Meanwhile, the LMP3 session had two separate red flags for spins.  Both of the incidents involved Norma M30s.

The first red occurred less than three minutes in when Dario Capitanio spun the Oregon Team No. 10 Norma into the trap at turn 5.  Capitanio was ok, but he lost his only lap at speed as a result of bringing out the red.  The No. 10 will start at the rear as a result.

Less than four minutes after the session restarted, Antonin Borga spun the N0. 7 Norma for Duqueine Engineering into the same trap to cause another red flag.  At the time, Borga was on his first flying lap.

Once the track went back to green, teams only had enough time (barely) to set one timed lap.  When time expired, it was AT Racing’s Mikkel Jensen who was fastest overall with a lap of 100.660 seconds (103.394 mph).   Jensen’s lap was one-sixth of a second faster than United Autosport’s Wayne Boyd.  Panis Barthez Competition’s Simon Gachet will start third in class, followed by M. Racing-YMR’s Alexandre Cougnard.  Eurointernational’s Giorgio Mondini will start fifth.

In addition to Capitanio and Borga that caused red flags, two other drivers were unable to turn in representative times because of the stoppages.  They were United Autosports’ Sean Rayhall and Ultimate’s Mathieu Lahaye.  They’ll have to start at the rear on Sunday.

In the GTE class, Spirit of Race’s Matt Griffin won the class pole in his Ferrari 488 GTE with a lap of 102.657 seconds (101.382 mph).  That lap was two-tenths of a second faster than the JMW Motorsport Ferrari of Will Stevens.  Proton Competition’s Matteo Cairoli will start third in the best of the Porsches.

The 4 Hours of Portimao is scheduled to begin at 1 p.m. local time (8 a.m. EDT).  The whole race will be available for live streaming at EuropeanLeMansSeries.com and on YouTube.  However, the YouTube stream may be geoblocked.