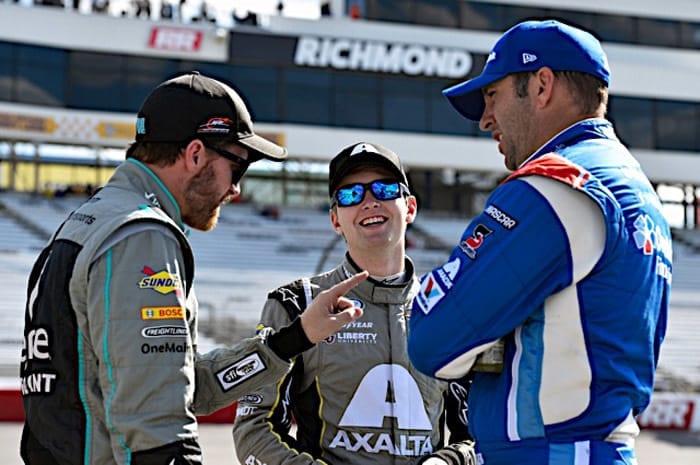 The 19-year old phenom William Byron showed on Saturday he may have what it takes to win the 2017 NASCAR XFINITY Series championship.

Byron, like his playoff competitor Matt Tifft, had to start from the rear of the field in the Kansas Lottery 300 at Kansas Speedway due to unapproved adjustments. His ensuing performance came to no real surprise, especially with how the rookie season has gone for him.

Despite not winning the race, Byron was the highest finishing XFINITY Series playoff driver, ending the day fourth. That alone can be a victory to him, as he leaves Kansas second on the playoff grid. The overall way he handled himself showed he’s ready to be champion. Last season, Byron let it slip in the final laps of the Camping World Truck Series race at Phoenix. Despite having three races remaining this year,  he’s stepping up to the very drivers he will compete against next season in the Monster Energy NASCAR Cup Series.

Like Alex Bowman, many critics are questioning how fast Byron is progressing his career. Though those critics will continue, a championship victory could muffle the sound. 30 starts into his XFINITY career and the kid has put massive numbers on the board. He earned his first career victory at Iowa earlier this year then followed it up by winning at two of the sports most famed tracks, Daytona and Indianapolis.

On top of the three victories, he has ten top fives and nineteen top tens along with two poles.

Rewind to three straight weekends that Byron showed his worth, starting with his near-victory at Michigan. He stepped toe-to-toe with 2016 Daytona 500 champion Denny Hamlin, finishing second in that race by mere inches. But when you look at the drivers he beat that day, there are two former Cup Series champions.

At Iowa, Byron had the opportunity to race fellow XFINITY Series drivers. That race fell into his hands with a late race caution that trapped many a lap down. Byron capitalized and earned his first career victory, but he wasn’t done there.

The following weekend at one of the most famed tracks on the NASCAR circuit, Byron prevailed again. He used the draft and his teammates to get up front and was able to just edge passed the overtime line and steal his second career victory. Talk about famed, three weeks later Byron kissed the bricks at Indianapolis edging 2011 Brickyard 400 winner Paul Menard.

The victory would be the latest by Byron but the stellar finishes would manage to continue pushing him into the second round of the playoffs, where he currently sits second. The one thing Byron needs is the opportunity at Homestead, the opportunity that fell out of his grip last year.