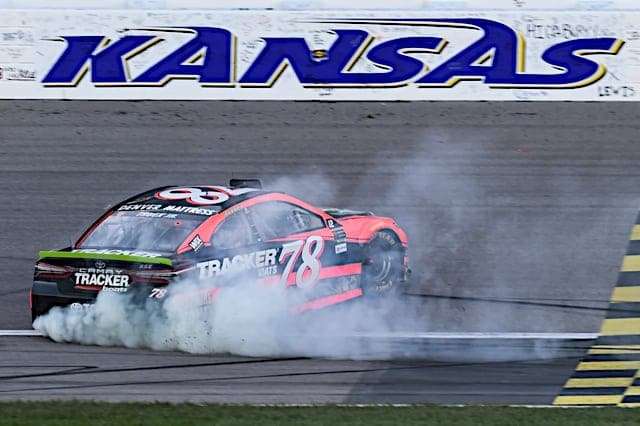 Who’s in the headline – Martin Truex Jr. continues his march to the season finale at Homestead-Miami Speedway. What happens when he gets there is anyone’s guess, but he has dominated the series this season, including a series -high seven victories. Truex overcame a restart penalty early in the race and a tire vibration to score the victory. Kyle Busch won the first stage and rode those stage points to the next round of the playoffs. Denny Hamlin stole a playoff point in the second stage.

What happened – Ryan Blaney lost his qualifying position due to a technical inspection violation after qualifying and had to start shotgun on the field. Early in the race, Truex was leading on the restart after the competition caution but dropped below the white line at the bottom of the track and was penalized.

Busch assumed the lead and led most of the remainder of the stage to score the stage win. Kyle Larson lost an engine at the end of the first stage, which ultimately ended his title hopes. The second stage had a caution with a handful of laps to go. NASCAR called a quickie yellow and many of the cars pitted. Hamlin did not and managed to hold off cars with fresh tires to win the stage.

Jimmie Johnson spun twice during the final stage, but managed to avoid serious damage and found himself in the Round of 8 when the checkered flag flew. In the final stage, Erik Jones wrecked in front of the field and triggered a big crash involving at least 14 racecars. Under the caution that flew for the incident, Matt Kenseth had seven crew members work on his car. That is a violation of the five-minute damage clock and it sealed Kenseth’s fate for the 2017 season as he was not allowed to continue. Busch was caught a lap down by a late-race caution that put him in danger of falling below the cutoff line, but was able to take a wave-around and advanced.

It wasn’t pretty today but #Chasing8 is still alive.

Why you should care – Kenseth was eliminated from championship contention thanks to a crew mistake during the caution after the big wreck. Unlike Jamie McMurray, who had major damage, Kenseth was looking at minor damage and should have been able to continue with a competitive car. Truex and Busch continue on with their large playoff point cushions which greatly helped Busch to transfer to the next round this time. Larson losing an engine and his shot at the title eliminated a major hurdle that stood between the rest of the playoff contenders and a championship. In the meantime, Blaney and Chase Elliott continue to march to the beat of their own drums and are into the final eight. Hamlin, Kevin Harvick and Johnson round out the rest of the playoff drivers.

What your friends are talking about – The tire test took place this week for the roval at Charlotte Motor Speedway. Not only was it a test of the potential rubber for the race next fall, it was also a test of the track. The facility made changes to the course as the test went along, and will probably tweak things more as it gets closer. Goodyear will have another test to confirm the tire next year and that will most certainly confirm some track changes as well.

The sanctioning body is reported to be on the verge of announcing standardized pit guns for pit crews. The high pitched whine of the Joe Gibbs Racing guns may soon be a thing of the past. Teams have spent extensive dollars making the guns as fast as possible, while remaining reliable. The standard gun will be truly dependable, but will not have the speed that the high end guns do on pit road today. How this policy will be implemented and policed will be very interesting to discover over the next few months. One thing we all know, if they can’t spend the money on pit guns, they’ll spend it somewhere else.

Aspen Dental will not reportedly not return to Stewart-Haas Racing in 2018. The organization has been a sponsor of the team since 2015 and stepped up their participation with the departure of Nature’s Bakery at the beginning of this season. It is a common place with sponsorship agreements that a company can leave the contract if there is a driver change. With Danica Patrick leaving the company, that window is open for Aspen Dental.

Kyle Busch will be wearing a Jason Beam painted helmet for the next two races and then will auction it off to benefit his foundation. The helmet actually glows in the dark.

Jim Watson, a road crew fabricator for the Furniture Row Racing organization, passed away from a heart attack Saturday night in Kansas. He is survived by his wife Laurie and daughter Brittany. Watson not only worked in NASCAR for Roush Fenway and HScott Motorsports before FRR. He was also a racecar driver in Wisconsin on both dirt and asphalt.

Who is mad – Larson was one of the three or four drivers that most everyone felt was a lock for Homestead. Larson led the points early in the year and seemed like the only car who could truly contend with Truex and Busch. An early engine failure relegated Larson to a one-point finish and that knocked him out of the playoffs.

Kenseth was racing comfortably in the points to advance to the next round before the giant wreck that damaged a third of the field. Kenseth came to the pits and his team had seven men go over the wall while the car was on the five-minute damage clock. As a result, Kenseth was parked and his hopes for a championship went out the window. With no ride lined up for 2018, it was a doubly bitter pill for Kenseth to swallow. In his post disqualification interview he chose to take the high road while obviously frustrated with the ruling.

Who is happy – Johnson is a seven-time champion but when a car isn’t handling as you’d like, you can lose control. He did it on consecutive cautions but soldiered on and made it to the next round. With Martinsville Speedway and Texas Motor Speedway on the horizon, Johnson is looking like he might be able to win his way into Homestead and then it is a one in four chance of winning a title.

Chris Buescher is an ARCA champion and an XFINITY Series champion. He’s in some equipment now that is less than championship-caliber, but continues to surprise from time-to-time. Sunday was another one of those races where he stayed out of trouble, stayed on the lead lap and was where he needed to be when the checkered flag flew. A sixth-place finish ties his best of the year (Michigan).

This is Truex’s seventh triumph of 2017.

Truex has two wins in his career at Kansas, both coming this season.

The victory ties him with LeeRoy Yarbrough and Dick Hutcherson for 54th on the All-Time list.

Kurt Busch crossed the line in the runner-up position.

This is Busch’s second runner-up run at Kansas in his career.

Busch has been the second car to cross the finish line 22 times in his career.

On the All-Time list, that ranks Busch tied with Fireball Roberts for 37th .

Ryan Blaney rounded out the podium at Kansas.

This is Blaney’s best-career finish at Kansas.

Blaney has three podium finishes in 2017.

Rookie of the Race was Ty Dillon. This is the fourth win of the year for Dillon. Daniel Suarez has won the award 14 times while Erik Jones has won it 13 times this season. Gray Gaulding has been bestowed the award once.

The victory for Martin Truex Jr. gives him five more playoff points and prevents another driver from advancing on a win or gaining those points. He and Brad Keselowski advance to the next round via win. The eight drivers who are left to contend for the title, their rank, points, and playoff points as we head into round three of the playoffs:

The drama of an elimination race was everywhere during the race on Sunday. The intensity spilled over to pit crews, which ultimately knocked Kenseth out of the race and the championship. Penalties, tire strategies, fuel windows and a big wreck all played into the mix which lead to a better than normal Intermediate race this season. While far from a barn burner it was an entertaining race and garners four ice cold Paver’s Porters from Cinder Block Brewery.

Where do you point your DVR for next week – The first race of the round of eight will be at Martinsville. The race will air on NBCSN starting at 3 p.m. ET. It can also be viewed on the NBCSports App. You can listen to the race on your local MRN affiliate, www.motorracingnetwork.com or SiriusXM NASCAR Channel 90.

With Brad’s total of 40261 POINTS shouldn’t he be leading?

It’s appropriate to see Brian’s attempts at eliminating points racing in a POINTS championship is working as well as his other great ideas.

i just have a feeling that truex will end up being screwed out of championship cause of something happening in the last race that is out of his control. i think one of the gibbs “home” teams will be the winner, not a satellite operation.

I have the same feeling. If that happens, I’m pulling for Chase Elliott to win the championship with no wins just by finishing ahead of the other three at Homestead. That’d throw the entire Chase and the stage racing gimmicks right in BZF’s face.

not that i’m a fan of his (But how can you dislike MTJ) – but that dude has earned it this year, and it’ll suck if he somehow gets caught up in something in FL. Hopefully he doesn’t but – damn, that guy has been dominant.