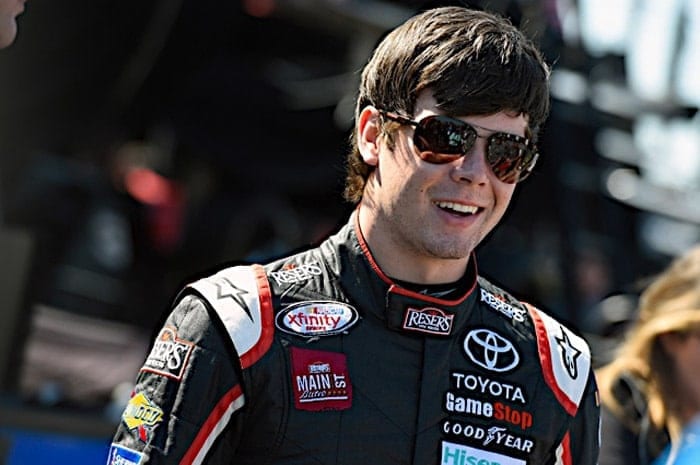 Erik Jones nearly scored a dominant XFINITY Series win Saturday afternoon at Kansas Speedway, but with four laps remaining, he lost the lead to Christopher Bell after leading 186 laps on the day.

The race went from disappointing to downright frustrating in a matter of seconds for Jones as the Joe Gibbs Racing teammates made contact after a slide job by Bell. Both drivers hit the wall, but the driver of the No. 20 Toyota of Jones got the worst of the damage and was left to limp around the apron until the checkered flag flew. In fact, his tire shredded to pieces on the apron as he crossed the start/finish line to end the race.

“We were getting run down by the No. 18 (Bell) and I was thinking we were going to be kind of racing each other for it and it was going to be close… but it wasn’t much of a race,” a visibly disappointed Jones said on pit road after the race. “It was more of just we wrecked and then he went on to win, so it is what it is. We had a good car and unfortunately, it just didn’t work out.

“You know that’s racing. It’s not always going to go your way and you know it definitely didn’t go our way today. We just have to come back, I believe Texas is our next one of these, so come back and do it a little bit better.”

When pressed a little further for his thoughts on the move, Jones didn’t mince his words but attempted to shrug off his disappointment.

“I mean it’s not dirt racing, you know. He’s not clear,” he explained. “I can’t just stop on the top. I didn’t expect him just to drive in on the bottom so far, he wouldn’t be able to hold his lane. It’s unfortunate. The Reser’s Camry was really good and I thought we were going to race for the win and unfortunately, it wasn’t much of a race. It was more of a wreck.

“That’s the first race in a while we’ve had a good XFINITY car and you know I was just thinking we were going to have a good shot there to win, but it is what it is. It’s going to happen.”

For his part, Bell did say he planned to apologize to Jones, though he didn’t express much regret for making the move that ultimately won the race for him.

“Just really thankful to be here and bummed at the way it finished, but happy it held on,” Bell said. “I was getting tire smoke in the cab those last couple laps and I was worried that we weren’t going to make it.

“We’re all riding around on the top there and our tires are really old and worn out and everybody is sliding around and I got a big run off of two. I tried to drive in really deep into turn three and clear him and get back to the top, but I hate that we didn’t get to race it out and he didn’t get to finish, but it’s my first XFINITY win and it’s something I’m really proud of and really proud of all these guys who have given me this JBL Camry.”

Jones will get another shot at a trip to Victory Lane at Kansas Speedway in Sunday’s Hollywood Casino 400. He’ll start seventh behind the wheel of the No. 77 Furniture Row Racing Toyota.

That wasn’t a battle for the lead, that was a zero percentage move that had no hope of succeeding except by the way it did. Any wienie could have done that, it takes real skill to do it without causing someone else to suffer damage. I hope Eric returns the favor at his next opportunity and provide a Joey Logano moment for Bell to learn by.

BS. Slide jobs are slide jobs. If you run into someone in the rear you are to blame, no matter where you are. The golden boy is letting his fame get to him, like Lagano did when he was driving for Gibbs.
BTW, Jones crashed in the cup race too. Whose fault was that? Larson’s?.

Quit being a whiny zit faced baby and FOCUS on your Cup Series Career, He don’t belong in the minor league series.

He crashed in the major league too. He’s butt hurt because a dirt tracker put a move on him.

Maybe he needs to learn what a brake pedal is. Dirt racers know. When someone does a slide job, all you usually have to do is tap the brakes, turn left and dive back under them. And, Bell was clearly all the way past him. Maybe Jones should do some dirt racing, it’d make him better.

I thought Jones had plenty of time to avoid the contact. It looked like he thought he could drive through Bell’s car like a ghost through a wall. I expected him to dive back under Bell.