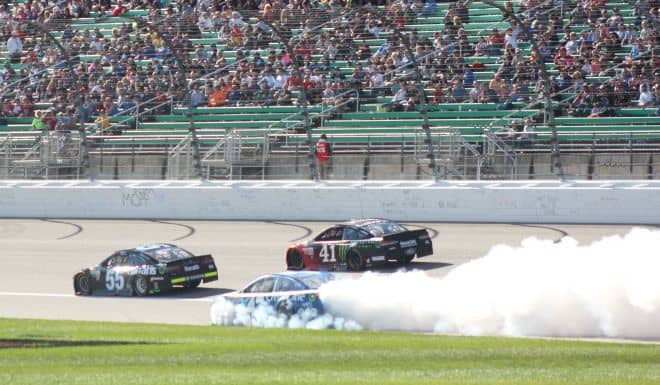 Kyle Larson’s race – and likely his playoff hopes – quite literally went up in smoke Sunday afternoon in the Hollywood Casino 400 at Kansas Speedway.

Early in Stage 1, the driver of the No. 42 Chevrolet brought his car down to the attention of his crew with problems with his engine. After going three laps down, he returned to the track, hoping to limp around until his team could attempt repairs, but it wasn’t meant to be for Larson as his engine blew with four laps to go in the first stage.

Not the way the 42 team wanted their race to end. #NASCAR pic.twitter.com/Ice9JvcJl8

Trailing fluid as he pulled into his garage stall, a dejected Larson emerged from his car clearly frustrated that his race had ended. With terminal engine issues, he’ll finish 39th, completing just 73 laps before he was forced to retire.

“It just dropped a cylinder 10 laps to go or so, and then it suddenly got worse and finally blew up,” Larson explained after emerging from the No. 42 Chevrolet. “I hate that we blew an engine and probably blew our shot at the championship, but luck is a big factor of our sport.

“I guess it’s sinking in as each second passes by. But I don’t know. Things happen. You look at the past playoffs and the No. 78 (Martin Truex, Jr.) had an engine issue last year and he was the best car all year; and then us, this year. So, it’s disappointing. But there’s still a long race left to go and maybe we can get lucky.”

Coming into Kansas, Larson held a 29-point advantage over the cutoff line, but it will take issues for other playoff contenders for the No. 42 team to move into the Round of 8.

“Obviously I’m going to watch and just cross my fingers and pray to anything I can pray to. But, I don’t think 29 points is enough. So, it’s disappointing, but we’ve had a good year. I’ve got to thank Credit One Bank and Target and everybody that’s been involved. It sucks to have the engine failure, but it is what it is.”

Larson has four wins and 19 top 10s in the first 31 races this season.