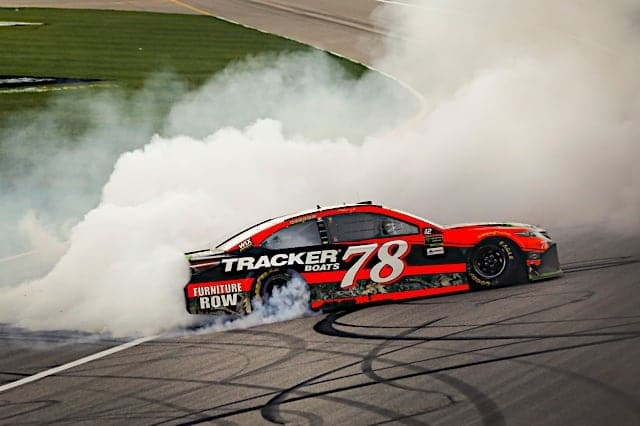 After a chaotic day that seemed to surprise everyone — drivers, crew chiefs, fans, etc. — a familiar sight ended the day: Martin Truex Jr. pulling into Victory Lane, as he won Sunday’s Hollywood Casino 400 from Kansas Speedway.

Overcoming a lap-36 restart violation and a loose wheel on lap 92, the Furniture Row Racing driver bounced back to win for the seventh time in the 2017 Monster Energy NASCAR Cup Series season, completing the sweep at Kansas after a win in the spring.

“I’m excited we got another one here in Kansas,” Truex said. “I got that one in the spring after so many heartbreaks. Today, it didn’t seem like it was going to happen, but we persevered.”

Kurt Busch finished second, while playoff driver Ryan Blaney came home third, his first top-five finish since winning at Pocono in June. The No. 21 team earned stage points in the first two stages, propelling Blaney into the Round of 8.

Chase Elliott and Denny Hamlin completed the top five, each advancing to the Round of 8 as well.

With Kevin Harvick in eighth, Kyle Busch in 10th and Jimmie Johnson in 11th, there are a few who did not advance out of the Round of 12 after a wild day Sunday.

It started with one of the shocker moments of the playoffs, as four-time race winner Kyle Larson blew a motor on lap 73, ending his day in the garage. Finishing 39th, the failure, mixed with a crash last week at Talladega Superspeedway last weekend, spelt elimination from the championship.

“It just dropped a cylinder 10 laps to go or so, and then it suddenly got worse and finally blew up,” Larson said. “I hate that we blew an engine and probably blew our shot at the championship, but luck is a big factor of our sport. Things happen.”

A couple other playoff men found the garage after a massive restart crash with 70 laps to go. With Erik Jones nearly flipping his No. 77 Toyota, Matt Kenseth and Jamie McMurray were involved and were done for the day.

Kenseth was parked after too many men went over the wall to service the No. 20 car and the 2003 series champion was frustrated at the rule that ended his championship.

“I don’t know what any of the rules are,” Kenseth said. “It seems like we have a lot of stuff that gets changed so often, I honestly can’t keep up. My head kind of spins from putting on lug nuts outside the pit box to one too may guys over the wall to you can’t even race anymore. I just don’t get it.”

Johnson avoided the backstretch mess after spinning his No. 48 car twice, suffering little damage. His hopes at an eighth championship continue to the Round of 8.

“Just extremely loose,” Johnson said. “I spun out twice, thankfully didn’t hit anything too hard. Down the back with that wreck, somehow, I went through there with a high rate of speed and missed everyone. I don’t know how.”

Chris Buescher scored his fourth top-10 finish of the season in sixth followed by Dale Earnhardt Jr. and Aric Almirola in the top 10.

It just doesn’t seem right that the Championship is decided by one race on the same track every year. Yes, skill and execution has something, but luck/unlucky has a lot more influence on it. The guy who has the most points after all the races, like it used to be, should be recognized too! So he can be depressed in the off season.