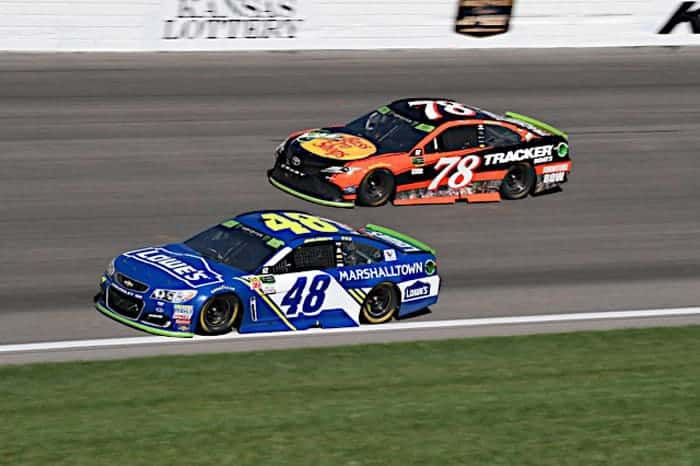 Championship hopefuls in the Monster Energy Series got a wild race at Kansas Speedway to close out the Round of 12.

Martin Truex Jr. won his seventh race on the year.  Jimmie Johnson and Kyle Busch found a way to advance to the Round of 8.  A crash and mistake on pit road took Matt Kenseth out of the game.  But the biggest surprise of the day was Kyle Larson’s early engine failure, which ultimately led to Larson’s elimination from the playoffs.

Many fans had Larson earmarked to be one of the four drivers who would race for the championship at Homestead-Miami Speedway next month, and for good reason.

Having bonus points roll over to different playoff rounds is new for 2017.  The idea was for success in the regular season to be more meaningful during the playoffs.  In the previous three seasons, it has not been uncommon to see championship favorites get eliminated prior to the third or fourth round.  The most memorable example from 2016 was Truex losing an engine at Talladega Superspeedway.

Truex had won four races up to that point, including two in the Chase.  Yet since everyone started the round of 12 on equal footing, Truex was just as susceptible to elimination as his peers who had less wins.

Allowing drivers to carry playoff points with them through the postseason was supposed to make the first 26 races of the year more valuable.  Yet despite all his success in 2017, Larson found himself eliminated in the same fashion as Truex did one year ago.

Does Larson’s absence from the championship fight mean that the playoff points system failed?  How different would the postseason look using 2016 rules for bonus points?

Suppose that NASCAR distributed bonus points for the playoffs the same way that it did last year.  If drivers earned bonus points based only on races won during the regular season, here is how the drivers would have been seeded at the beginning of the postseason.

Now let’s say that all the playoff drivers earned the same finishes that they did in this year’s Round of 16, including stage points.  Here is how the points standings would have looked prior to the Round of 12 reset.

Ultimately, there would have been no change among the drivers who advanced.

Ricky Stenhouse Jr., Ryan Newman and Austin Dillon each would have had a close battle at Dover for the final transfer spot. Stage wins and extra points for the top 10 regular season drivers would not have mattered, because Stenhouse’s, Newman’s and Dillon’s bonus points all came from winning races.

In this scenario, Larson misses out on advancing to the Round of 8, but so does Kyle Busch.  If the No. 18 team had not entered the Round of 12 with 41 playoff points, two of the top championship contenders would have been knocked out at Kansas.

In hypothetical situations like these, it is important to note that, with the points being different, drivers would not have approached the race the same way that they did in real life.  For instance, Kenseth would have entered Kansas four points above Johnson for the last transfer spot.

Both drivers had such a chaotic race on Sunday that the circumstances that took Kenseth out of the event might not have happened.  Yet looking at the raw point totals alone, playoff points did indeed save Busch’s title hopes.  As for Larson, the number of points that he lost at Kansas would have done him in either way.

Going forward, playoff points could still have a big impact.  Truex still looks like a favorite to reach Homestead, and he will start the Round of 8 with a 52 point advantage on the cut line.  Busch is in good shape too, enjoying a 25-point cushion on the cutoff.  Yet if other playoff drivers earn wins, the path to Homestead becomes much more difficult for Larson and Busch.  Larson’s fate proves that the last 10 races are still the primary factor in deciding who wins the championship.

Having playoff points remains a positive change to the elimination-style postseason.  Success in the regular season does matter more than it did the last few years, and it should matter.  But NASCAR clearly wants its champion to be the driver who performs best at the end of the year.

If Truex or Busch hope to hoist the big trophy after leaving their rivals in the dust for most of the season, then their work is far from done.

I still find it totally ironic that racing for points has now become almost more important than win, when this whole ‘playoff’ abortion came into being because drivers were ‘points racing’. Makes it even more of a joke.

It certainly made a difference Sunday. What I’ve notice is how much of a penalty going out early in a race is now. I wonder if without stage points, Larson would have survived. As always, blowing an engine is always a near fatal blow to any team’s championship hopes.

Where’s the PRE “chase” & “staged” farces [straight NORMAL] points tally Mr. Bryan? That’s the only one that matters & the one EVERY other category in the WORLD uses. As if not huh? Nice version of reality…
In that “stages” points don’t reset, I could almost buy off in the format as an improvement. But considering the STOP twice in the middle of every race it COMPLETELY DELEGITIMIZES every event in all 3 Nascar categories. If they would do it like other sanctioning bodies, like IMSA, & just awards points WITHOUT stopping the race – OR – run 2 – 3 separate & distinct races, like AV8SC, it would not be as nauseatingly disenfranchising, but I still would not buy it. Bc why does it matter & who gives a **** who leads the 1st quarter or at halftime?
Nascar has rendered themselves MEANINGLESS! ZERO sports integrity! What once Globally epitomize motorsports & motorsport championships is laughing stock of “monster truck” or “formula drift” proportions.
Then, there’s this, I mean really, get the **** out’ta here with this!
October 22 , 2017 – Kansas commercials
Total laps: 267
Total ads: 258
– Total traditional: 66
– Total side-by-side: 33
– Total graphics & scripted: 159