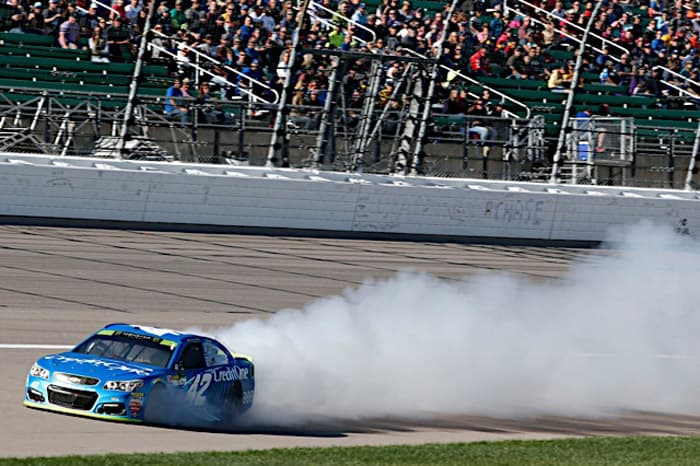 ONE: There’s Always Next Year for Kyle Larson

After a break out season that promised so much, Kyle Larson started this past Sunday at Kansas Speedway some 29 (33?) points to the good, to all the world looking like an easy bet to move on and make it to the round of eight. But a blown engine, just 73 laps into the race, and the subsequent 39th place finish saw Larson slip below the cut off line bringing a crushing and very premature halt to his championship run.

Running in his fourth full season at the Cup level for Chip Ganassi Racing, Larson has won four times in 2017, with 14 top-5 efforts, 19 top-10’s and 1,121 laps led – oh, and four races still to run. Week in and week out this year, Larson has shown that he is a genuine force to be reckoned with.

Crappy way to end our run at the championship but that's just part of it sometimes. 25yrs old, gonna have more opportunities with this team!

Whilst his post-race tweet may be tinged with obvious disappointment it is still a succinct summary of where he is at professionally: Larson is here to stay and his talent and driving chops suggests his chance will come again and come again soon. And with the way he races at Homestead-Miami Speedway he might not be done with winning just yet this season either. Watch this space, as they say. Larson’s time will come.

On the other end of the spectrum of disappointment at not moving on to the round of eight is the 20-year, 646-race veteran, and 2003 Cup champion. In the end, it was one too many men over the wall that did it for Kenseth, although given the damage sustained in the wreck, his day certainly wasn’t looking anything but bleak.

“I don’t know what any of the rules are,” said Kenseth post-race. “Seems like we got a lot of stuff that kind of gets, you know, changed so often I honestly can’t keep up with it. My head kind of spins from putting lugnuts out of pit boxes to one to many guys over the wall, you’re not allowed to race anymore. I just don’t get it to be honest with you.”

All told, then, it was a hugely dispiriting end to his quest for a second title and given that he is out of his Joe Gibbs Racing ride with no plans for 2018, potentially a hammer blow in what has been a great career. The reality was, though, that Kenseth was still something of a long shot to win the big prize.

“We showed some flashes of brilliance this season, been off and on, been fast at times, had great pit stops at times,” he reminisced. “But just haven’t been able to put it all together like a championship team needs to.”

That’s a good summary of 2018 for the man sometimes likened to a robot – close but not close enough. Here’s hoping he can pull off a win in the final four races and perhaps set himself up for a ride in 2018 – if indeed that’s what he wants.

THREE: Next Up, Martinsville

I’ve said it before; I’ll say it again. There are no woes that can’t be fixed with a visit to Martinsville Speedway. In a beautifully ironic note, it’s the smallest, slowest track that most often delivers, and you can pretty much bet we’ll see a great race this Sunday afternoon.

For some in the final eight, the lil ol’ paperclip represents the best opportunity at making the Championship Four at Homestead-Miami Speedway. One of those is Brad Keselowski, who won the first race of the 2017 season held at Martinsville. “Yeah, Martinsville at this moment as it stands I would say is a must-win for us, and we know that going in,” said Keselowski. “We tested there, and we feel like that’s the type of track that we have a lot of strength for.”

This will be race number 138 at the .566-mile flat track, a streak that runs all the way back to race six of the inaugural season of 1949 and a race won by Red Byron. Here’s hoping we continue to race at Martinsville for many more years to come and perhaps even under the newly installed lights. It should be a good one this weekend, folks. I’m really looking forward to it.

Meanwhile, over on NBC proper, running at the same time at the Cup race at Kansas, viewers got to see the U.S. Grand Prix – the 17th race of the 20-race 2017 Formula 1 season. In keeping with a theme this year, Lewis Hamilton won the race in relatively dominant fashion. This was race win number nine on the year for Hamilton and his sixth checkered flag in the past eight races.

The three-time champion, who started from the pole, was actually beaten to the first corner for four-time champ Sebastian Vettel but the German was only able to hold off the hard charging McLaren for about six laps.

“The race was great, it was probably one of the most fun races that I have had for a while – and there were quite a few fun ones this year,” said Hamilton. “I didn’t get away to a great start, but I was kind of chilled about it, knowing from the past that I can overtake here.”

The one note of controversy came at the end when Max Verstappen’s epic last-lap pass for a podium finish (third) was disqualified (leaving the track to advance position) as the young Dutchman waited in the cool down room ahead of the trophy presentations. Controversial officiating decisions aren’t just confined to NASCAR, it seems, which I suppose in some ways is refreshing.

Hard to believe only four races remain and we’re 90% complete with the 2017 schedule. Each year, it always trips me up, as before I know it, we’re nearly into that sad stage of the year where there’s no racing every weekend. Between now and Championship Weekend there is much still to be decided (well, from a title perspective, everything) so what I want to say is enjoy these next four weekends. Before we know it, we’ll be in that “XX” days to the Daytona 500 stage.

Max doesn’t drive for Ferrari. If it was the other way around there wouldn’t have been the penalty.

@DoninAjax — Definitely seemed like a strange penalty given what had happened the rest of the day. Max is going to be a champion one day soon.

He does seem to like to pass cars on the track, not like that ego-maniac Michael Schumacher who said he’d rather pass cars in the pits.

Larson’s car including engine from hendrick. If larson finished race ahead of elliott, elliott would prob. be eliminated. Larson’s engine blows up, first time this year, elliott a hendrick car still in place for the championship. HUMM?