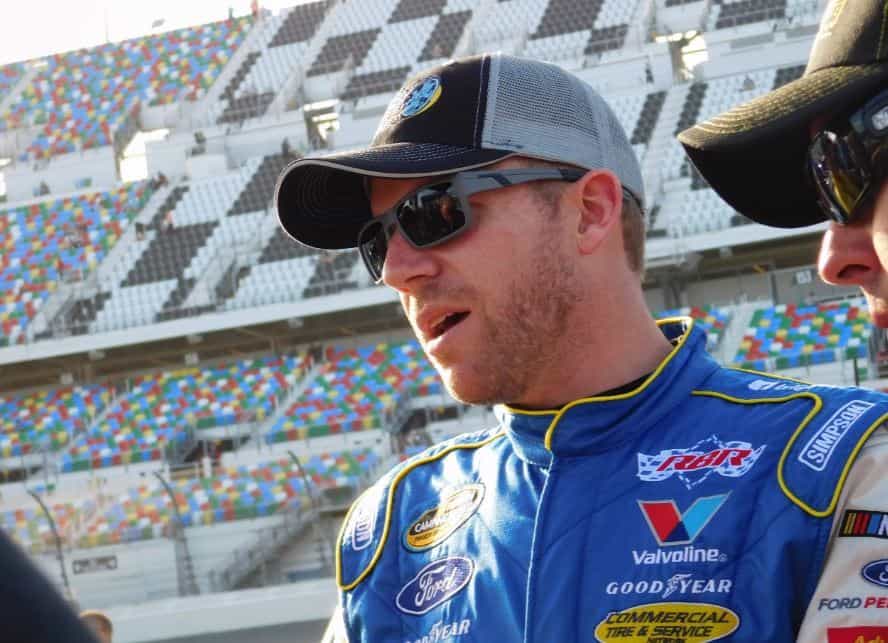 In the fall 2008 race at Talladega Superspeedway, NASCAR ruled that Regans Smith’s pass below the solid yellow line to beat Tony Stewart to the finish was not a legal move. Stewart led the single-file field down the frontstretch and blocked Smith, leaving him nowhere else to go. Had Smith tried to stay above the line, he would have likely wrecked Stewart, which he didn’t want to do. Smith felt his pass was justified because he was blocked and when it comes down to a race win, “anything goes.” Instead of being scored the runner-up, Smith was placed 18th in the results. – John Haverlin

I can’t think of this topic without immediately thinking of Steve Park. Park was just beginning to get to where he could contend for wins when he was victimized by a freak accident in an XFINITY race at Darlington in 2001. Under caution, his steering wheel came off and the car veered to the inside at the exact moment that Larry Foyt was speeding past to get to his position in line. The driver side impact left Park sidelined for the rest of the year. He returned early in 2002 but he was never as effective behind the wheel and was let go from his DEI ride in mid-2003. He finished that season in the Richard Childress No. 30 but was released from it as well at year’s end. Park has only made two Cup starts since. – Frank Velat

Back in 2011, Kyle Busch Motorsports announced its move into the XFINITY Series for the 2012 season.  The No. 54 Toyota was going to have Monster Energy as the primary sponsor (which did happen).  Kyle Busch was going to drive part-time, but he was originally supposed to share the car with Ricky Carmichael. At the time, Carmichael had just completed his second full season in the Camping World Truck Series. He’d earned four top-five finishes (his best runs were a pair of fourths at Dover and Talladega) and 18 top 10s in 68 starts.  He’d also had one career top-10 finish (a ninth at Road America) in the XFINITY Series.

Carmichael brought the sponsorship from Monster Energy to the team. They were longtime backers of his, dating back to his AMA days.

However, Kurt Busch had his meltdown at the end of the 2011 season, marked by the infamous video of him cussing out Dr. Jerry Punch at Homestead.  Shortly after that, Team Penske fired Kurt and replaced him with AJ Allmendinger.

For a time, it looked like Kurt was going to be without a NASCAR ride in 2012 because of his off-track actions. Kyle extended him an olive branch and put him in the No. 54 for the races that he would not contest in place of Carmichael. The fact that Kurt eventually got the Phoenix Racing ride in Cup ended up being irrelevant.

While Kurt was able to give Kyle Busch Motorsports its only win in spectacular fashion at Richmond (something that even Kyle couldn’t pull off), Carmichael spent 2012 on the sidelines. At the time of the announcement that Kurt would drive the No. 54, Carmichael told SiriusXM NASCAR Radio’s Dave Moody that he had a handshake deal to stay with Monster Energy in 2012, but that Kyle Busch’s actions at Texas in the fall of 2011 began to unravel the deal. Carmichael has not raced in NASCAR since and has retreated back to his two-wheeled origins. – Phil Allaway

4. Taken out of a title run

You can’t have this list without talking about Mark Martin’s title bid in 1990. Martin won the spring race at Richmond but failed post-race inspection for an improperly attached carburetor spacer. The infraction resulted in a 46-point deduction for Martin, who lost the title to Dale Earnhardt by 26 markers.

It’s hard to argue the penalty, as it followed NASCAR’s rulebook at the time, but even the other teams said there was no performance advantage. It seems like that one mistake, made by an engineer, dogged Martin for the rest of his career. He never did win a championship.

It was probably the right call by NASCAR, but it’s never sat well. – Amy Henderson

5. Screwed right on into a title run?

I suppose for my choice the question becomes are you really screwed if you end up coming out ahead?

My answer would be Martin Truex Jr. Everyone remembers what happened at Richmond in 2013 with MWR while Truex was in the NAPA car, but just in case, Truex was borderline to get into the Chase when, in the closing laps, after an odd radio exchange later thought to be team code, teammate Clint Bowyer spun himself out and part-time teammate Brian Vickers was called into the pits under green, setting up a scenario that put Truex into the Chase in a Wild Card spot.

Truex wasn’t involved in any of this orchestration. He was just out there driving the wheels off it trying to get in the Chase if he could, while all of this behind the scenes maneuvering was going on around him with team principles and teammates. However, the resulting scandal cost MWR the NAPA sponsorship, and ultimately, without a sponsor, cost Truex his ride. The only guy not involved was the one that got the shaft in the deal.

In the end, however, MWR no longer exists and Truex has enjoyed more career success with Furniture Row Racing, (a move some initially thought was not upwardly mobile) than with arguably any other team he’s ever raced with. So, really, was he screwed or was it a blessing in disguise? – Toni Montgomery

Amy, I believe it was the spring race after the Daytona 500. For those interested, read this:

By the way, Martin’s car passed inspection THREE times and then failed AFTER the race. Sound familiar?

Well, you know, Nascar never met a GM car it didn’t like better than a Ford.

How about Bobby Allison’s win in the Mustang in one of the races without a winner. Maybe he’ll get it when DW doesn’t care if Bobby has one more win than him any more.

NASCAR admitted that he was right and they were wrong, but let the error go uncorrected.

Allison should have 86 wins and ol’ DW would have nothing to cry about- he’d be behind him free and clear!

I can think of a few others………

How about Ricky Rudd being screwed out of a win at Sonoma after being black flagged for “rough driving” after contact with Davey Allison.

They could do that to Rudd. They couldn’t to Earnhardt.

How about the way Ray evernham screwed Casey Atwood?

The Grinch
Reply to  Cush Atkins

Bill B
Reply to  The Grinch

I always said Tony Stewart should thank Regan Smith every NASCAR Weekend for possibly saving his life or career at that Talladega race. Brad K showed Carl Edwards what happens when you hold your racing line.
You’re the first one I’ve read/heard that interpreted that move the same way.