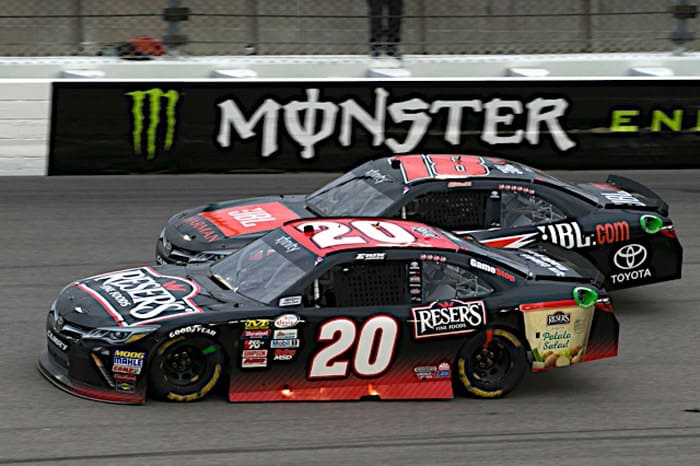 Christopher Bell won his first career XFINITY Series race this past weekend at Kansas Speedway, but it didn’t come easy. He wound up performing a slide job on his Joe Gibbs Racing teammate Erik Jones, damaging both race cars, but also ended up in Victory Lane.

Was Bell’s move on his teammate OK?

Competition brings out the best in us, and sometimes the worst in us. On Saturday afternoon at Kansas Speedway, Bell had a win in his sights, and he didn’t let it slip away.

Well, actually, he went out and took it, and that should be applauded.

A few things need to be kept in mind when talking about this. The first one is the fact that neither of these drivers is competing for the championship in the series they were competing in for this race. In essence, anything other than a win would’ve been a disappointment.

It’s just like a Cup driver running in the lower series. All they want to do is win. Just because Bell and Jones are younger drivers who haven’t yet experienced wins and championships at the top level in the sport doesn’t mean they can’t fight it out like big boys when it comes down to the end.

Jones had run 15 XFINITY races coming into Kansas, finishing in the top 10 more than half the time and in the top five seven times. He also has won twice already. Bell, on the other hand, only had competed in four races in the series, as has been focusing on his pursuit of the Truck Series championship.

Again, these guys are young, relatively inexperienced and hungry. They don’t necessarily care what the repercussions are for pissing people off, even their teammates, behind the wheel of a race car.

Who cares if the move didn’t occur in the final corner of the final lap? Would it have been more dramatic? Hell yeah. But I still was on the edge of my seat watching Bell dive his No. 18 into turn three and slip up in front of the No. 20 of Jones.

In his post-race interview, Jones was bitter, and he should’ve been. I’m not saying he should be all roses and sunshine after he had a win taken away from him in what he deemed to be wrecking fashion.

As Walter, the father on one of my favorite TV shows Drake & Josh once said: tough squash.

Yeah, this ain’t dirt racing. We know, Mr. Jones. But I guarantee that if you were as hungry as Bell was for your first victory in the XFINITY Series, on the same weekend when it was announced that you’d be running full-time for JGR next season, you’d do anything in your power to try and win, too.

Isn’t this what we want as fans? Isn’t this “boys have at it” in action on the race track? Isn’t this the heart-pumping, edge-of-your-seat-sitting, exciting racing that we want from two young stars, future champions and fast racecar drivers?

I don’t know about y’all, but this is what I want.

Jones and Bell’s relationship is definitely a bit frayed at this point, but I’m a firm believer of ruffling some feathers every now and then, and that attitude is leaps and bounds better than sitting in the backseat and being shy. Translation: If you have a chance to move someone out of the way to win the race (or in this case, dive bomb them and make contact), you do it. And you don’t worry about the ramifications along the way.

And it’s all because he had the guts to go with his gut and do whatever it takes. – Davey Segal

Bell should have thought twice before performing an all-or-nothing slide job to take out Jones for the win at Kansas Speedway.

I am by no means labeling Bell as a dirty driver, as he had every right to make that move. After all, the goal of being in a race is to win, and that is exactly what Bell did. Bell did not intentionally wreck Jones, but Jones wrecked because of Bell’s actions; there is a difference. So while Bell’s move was not dirty, it was unnecessary for a few reasons.

Bell performed that slide job with four laps to go. It was far too aggressive of a move to make with that many laps left. If he had done it on the last lap, I would be his biggest backer, because on the last lap you need to do everything you can to win. Plus, an aggressive move on the last lap is less likely to ruin the other driver’s finishing position.

It is not like that was Bell’s only opportunity to get around Jones. He was a lot quicker and had rapidly drained Jones’ lead. He would have had six more opportunities to pass and probably could have made the pass in a clean manner.

It took loads of talent to for Bell to perform that pass, and his dirt track experience certainly paid off. But as Jones said after the race, this isn’t dirt track racing, this is asphalt. Slide jobs do fly in asphalt races, but not one to that extent.

In a normal asphalt slide job, a driver will drive a little deeper into the corner than normal but will slow down enough so they still enough control of the car to drift up the track and maintain momentum.

Bell basically drove so deep into the corner that he could not possibly maintain his momentum without slamming into the wall. As a result, he had to wait much later to get back on the throttle and, on a track where speeds reach around 200 mph, he was parked in the middle of the road for the oncoming Jones.

A slide job of that nature can be executed on a dirt track without much damage, but it demolished Jones’ nose and kept him from placing in the top 10, which brings me to my next point.

Jones was mad at Bell after the race and probably lost respect for him. As a driver who will be a rookie in the NASCAR XFINITY Series next year, Bell needs to gain as much respect as possible in his formidable years, especially from his teammates.

Bell and Jones will likely race together in several NXS events next season for JGR and, one day, they will likely be teammates for JGR’s Monster Energy NASCAR Cup Series team. Bell will need the tutoring of Jones, and I am not so sure Jones will want to be that great of a mentor after being raced like that.

Also, Joe Gibbs could not have been thrilled with Bell’s move. Gibbs would have loved for his cars to finish one-two and in pristine conditions. The Coach still got the win, but he came away with two torn up race cars.

The better way for Bell to impress his boss and instill in Gibbs the confidence to one day let Bell take the reins of a JGR Cup car is for him to return his cars in one piece and not cause the other Gibbs cars to wreck.

Bell is an amazing talent who will have success at the top level of NASCAR. He is not a dirty driver and hopefully, he will think twice before he races a teammate like that. – Michael Massie

You’re obviously on the Jones band wagon. Not one mention that Jones could have slowed or better yet turned left and re-passed Bell the way it happens all of the time in turn one and two at Darlington. While Jones is a talent he has had more then a few foul ups this year. He lost control of the car the next day didn’t he? When it comes to dirt track racing Mr. Jones should talk to Jeff, Tony, Ryan, Kasey about it. One problem i’m Seeing with these young guys is that they are believing their PR people.

I’m with Bell. Jones had ample time to see what he was doing and execute a cross-over. He chose to stay in the gas and plow into him. It was good action either way, and fun to watch, especially since it looked like Jones was going to run away with the win.

Tom B
Reply to  Upstate24fan

I like the move Bell did. I would like to see it more often on the last lap. But Jones did not have “ample time” to slow down or cross over.

I agree with the commenters, it’s more about what the driver that got passed chose to do.
What Bell did, he did. Was it the smartest move? nope.
He was very lucky he didn’t get wrecked.

What did jones do? He basically wrecked him self needlessly.
Same situation where the driver who got passed is more experienced or less naive?
There’s no way that Bell wins. He’d have been lucky to finish.

Was it exciting.. well sure if you like wrecks.
Was it good racing? nope.

Sorry Mr. Massie but you must have lost the coin toss on which side of this argument to debate. Bell did nothing wrong and since Jones hit the 18 square in the rear bumper without getting the 18 out of shape too bad the move was completely clean and within the realm of racing. Jones can whine and complain but he easily could have avoided the whole thing but slowing slightly and pulling down under the 18 car out of the corner. Jone’s spotter also holds some of the responsibility in this as he could see what the scenario was shaping up to be as they were going into three and as such could have said something to Jones.

If Gibbs is upset he needs a different occupation other than racing.

I do agree though Bell could have waited but he saw his opportunity and took it.