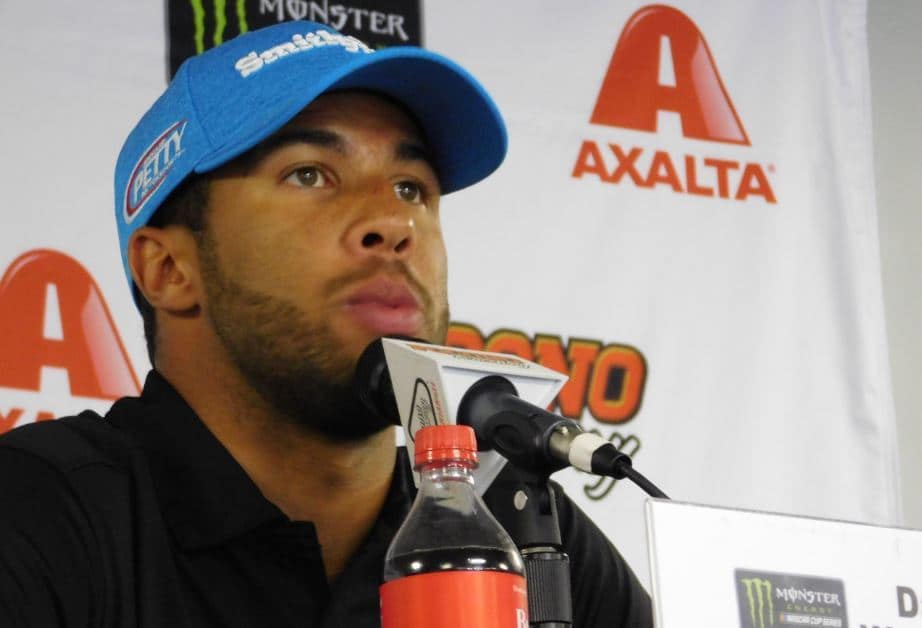 On Wednesday (Oct. 25), Richard Petty Motorsports (RPM) announced that Darrell “Bubba” Wallace Jr. will replace Aric Almirola as the driver of the No. 43 Ford full-time in 2018.

As a result of RPM’s move, Wallace will be the first African-American racer to compete full-time in the Monster Energy NASCAR Cup Series in the modern era, as all but nine of Wendell Scott’s starts came before the 1972 season.

Wallace is overjoyed at the prospect of racing full-time for the King.

“This is a dream come true to race for The King, Richard Petty Motorsports, the iconic No. 43 and for all the fans and partners that have and continue to support this team,” Wallace said in a press release.  “I believe in what Richard Petty Motorsports is doing and their desire to win races. I believe this team, its partners and fans are ready to see some great things again.  I’m humbled that they have chosen me to take that next step with them. I’m ready for next season to begin and to prove to people that we can compete at the level we all expect to be at.”

While the news was just announced on Wednesday, someone may have jumped the gun a little bit.  This video that Wallace posted to his Twitter feed post-announcement was uploaded to MSN on Tuesday.  After being online for 20 hours, it was quietly pulled down just before the announcement was made.

Team co-owner Richard Petty is quite excited about RPM’s future with Wallace in the No. 43.

“We have hired a lot of different drivers in the past, but Wallace brings a lot of youth and talent to our team,” Petty said.  “He’s proven at a young age to be able to be consistent on a weekly basis, give feedback to the team to help improve the car and race hard to get the best finish possible.  He knows how to win, too.  His records leading up to the top levels of NASCAR speak for themselves.  We feel that Bubba can immediately come in and compete.  He’s really eager to show what he can do and that he belongs in the Monster Energy NASCAR Cup Series.”

Wallace was one of the three drivers to substitute for Almirola (along with Regan Smith and Billy Johnson) earlier this season after Almirola suffered a back injury at Kansas in May.  Wallace drove four races in the No. 43 with a best finish of 11th at Kentucky Speedway.

With Smithfield Foods departing for Stewart-Haas Racing at the end of the season, sponsorship is still up in the air for the No. 43.  The team’s official press release notes that partners for the team will be announced at a later date.

Thank God. The diversity monster has been fed.

Lynne
Reply to  Bill B

Seriously? What a ridiculous comment. Bubba earned this based on talent; don’t diminish it.

I agree he does deserve it.
My point was that I’ve been reading articles for the last 3 months that continually associate his name with NASCAR’s diversity efforts and I’m hoping this will result in fewer of those articles because I’m sick of reading about it. If you don’t like that, TS.

Lynne
Reply to  Bill B

I imagine Bubba gets tired of it too. No need to throw out expletives, they do nothing to help make your point.

The purpose of the expletive wasn’t to make a point, it was solely to annoy you.

Congratulations Bubba! This is fantastic news! A well-deserved ride; I am excited for next year. He earned this on talent, it has not a thing to do with a “diversity monster.” Don’t take away from his talent and determination. He earned this.

glad bubba has a ride. just like when bowman sub’d for Earnhardt, bowman did a great job. bubba might be what petty enterprises need, youth and hungry to win.

I don’t think it’s a diversity thing, but of course everyone will say it. bubba did a good job for petty this summer and he got people excited about the 43 cause he had a great outlook on being in that car.

now get sponsorship and make those cars competitive. hopefully being a ford team he’ll benefit from roush/yates engines.

Earned it !!! Exactly ZERO wins in the Xfinity series in three years, how is that earning it. We all know this for what it is, it’s no secret NASCAR told Richard they will help find sponsors for him. Petty has no shop, no major sponsor, but now they have a diversity driver for nascar. Bubba will be working for peanuts during this contract.

6 wins in the Truck Series, including Martinsville, Eldora, and Gateway. He was in subpar equipment at Roush in a series where Cup guys take most of the wins, and was 4th in points when his ride was shut down. He also outran Amirola in the 43 this year. I think he earned it. I don’t hear anyone saying Alex Bowman didn’t earn the 88 (no NASCAR national series wins until this month). Hum…I wonder why?

Bubba, Bubba, Bubba, maybe he has potential and some talent, but so far nothing that I’ve seen that would knock your socks off. So far no top tier owner or mega sponsor has jumped on the diversity bandwagon at the cup level. The #43 has fallen to the third tier level car. Good luck Bubba you gonna need it.

He hasn’t got a chance of any kind to win in that car. But he will keep the body shop busy.

Nothing will come of this, but “diversity” stories and more torn up race cars. He isn’t going to cure the ill’s of RPM, and he certainly will not rise above his current talent level. I do not believe he is one of those drivers “if you put them in a better car and team, he will excel”. (And I know RPM isn’t it). I am just anticipating those stories and comments when he puts in the subpar results at RPM, I expect he will….the apologists will scream it isn’t BUBBA, it is the team, as we have seen numerous times in the past. It did not work in the kiddie series. Another waste of a seat for all the wrong “reasons” imo. Time will tell, time will tell, time will tell.

I disagree in that this is very likely the only way the seat survived. Am curious as to who drove this. My guess would be Ford at the urging of ISC.