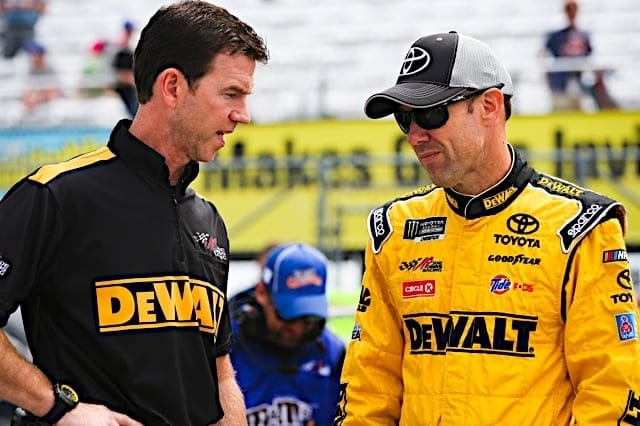 Did You Notice? … Matt Kenseth’s missed opportunities? Kenseth’s five-year tenure with Joe Gibbs Racing will end without a Cup Series championship. Despite at least 14 wins and five playoff appearances, the final nail in that coffin came the second an extra man jumped over the Kansas Speedway wall Sunday afternoon.

It’s a rule we’ve struggled to understand but just the latest in Kenseth’s bad luck jinx inside the championship race. Let’s take a quick look back at the title chances that slipped away.

Kenseth and Jimmie Johnson found themselves head and shoulders above the pack all season. In his first year with Joe Gibbs Racing, Kenseth won a career-high (and series-high) seven races and led 1,785 laps. He entered the Chase with a three-point lead over Johnson and started off by winning the first two postseason events.

But then the series went to Dover, Johnson’s bread-and-butter and a win there started a slow erosion of Kenseth’s lead. By the time the duo left Talladega Superspeedway, Johnson was back atop the standings by four points. You could say picking the wrong draft strategy there may have cost him five to seven spots in the stretch run.

Next came Martinsville, where Kenseth unexpectedly fought back. A career best second for him there left the duo tied with three races left to go.

But that’s when it all fell apart. Johnson dominated Texas, then survived multiple incidents involving contact at Phoenix to finish third after winning the pole. Kenseth? He tanked at a track where the No. 20 team finished seventh in the spring. A day to forget included a 25-second pit stop and virtually every track adjustment gone wrong.

Despite going winless (similar to his current season with JGR), Kenseth remained competitive and snuck through to the Round of 8. That was despite on-track contact at Charlotte that left him fighting with Brad Keselowski.

But it was the first year of NASCAR’s new format and simply making it to Homestead left anyone’s championship hopes wide open. The No. 20 team was right there, a sixth at Martinsville leaving them fourth in points. Winning the pole at Texas, it looked like a win was finally theirs for the taking.

Kenseth was in position, leading 59 laps and fighting back through a rollercoaster day where a lugnut got lodged in the right front wheel during a stop. He had to charge back from 18th and was inside the top-10 positions when contact with Ryan Newman happened after a restart. That led to damage, an unscheduled stop, and a 25th-place finish that negated a third at Phoenix the following weekend. Without that bad luck? It’s Kenseth, not Newman sliding into the Championship Four.

Kenseth had another strong year, winning five races total including one in the Round of 16 during the postseason. He entered the Round of 12 one of the favorites and won the pole for the first race at Charlotte. He went on to lead 72 laps in the race but a lengthy pit stop cost him track position. Working his way back up through, there was contact with Newman again, ruining the No. 20 for the afternoon. A second wreck later left him 42nd.

Despite that setback, Kenseth led 153 laps at Kansas and was in position to advance the following week. That is, of course, until Joey Logano kept the No. 20 in his sights after a lap 248 restart which led to this infamous mess.

Whatever your opinion, after that moment Kenseth’s title hopes were toast. And that’s during a year where the man who won the championship, Kyle Busch, didn’t even start 11 of 36 Cup events. The No. 20 team could have easily prevailed.

Kenseth made the Round of 8 for a second time in the three years NASCAR has had this format. After a wacky first two events, he entered Phoenix just a point outside the points lead and had a strong car all weekend. The No. 20 Toyota was a top-five machine from lap 100 on and took the lead on a lap 262 restart. It seemed like Kenseth was finally in position to compete for a title.

But a late-race wreck by Michael McDowell caused overtime. On that restart, upstart Alex Bowman had the inside line and came down to block Kenseth. The two made contact, Kenseth hit the wall and just like that, his championship bid was over.

Kenseth has endured a winless season but still was among the fast four Toyotas who made the playoffs. He advanced to the Round of 12 without a problem and was in position to cash in for the Round of 8 after Johnson struggled through most of the race. He was a top-five car at the end of Stage 2 and had the speed to work through traffic on the long run.

While the big wreck in Stage 3 caused the No. 20 team damage, it was not insurmountable. Kenseth’s team, in hindsight would have needed around a sixth-place finish to pass Johnson for the eighth and final spot in the round. But that was not an impossible task in a race where just 22 cars, several of them damaged finished on the lead lap.

Those missed chances could make the difference on Kenseth’s resume. Like Kurt Busch, whose title chances flamed out in the Round of 16 Kenseth demands a high salary as a former champion. It’s a price tag the middle-tier rides available will find difficult to pay without sponsorship.

Would it be easier, say, to convince Barney Visser to run that No. 77 Toyota in 2018 if the 2017 series champion was available? You bet. Could Richard Childress Racing find the cash for a title winner within the past five seasons? It’s more likely.

But the bottom line is Kenseth has been the definition of “so close, yet so far” during his time with JGR. It shows how difficult these titles are to win and how small moments in a 400 or 500-mile race can change the trajectory of a career. You wonder if he would still be sitting on the sidelines next year if there was an extra trophy on his resume besides 2003.

The biggest problem Kenseth has had at JGR is lack of a decent crew chief. Phoenix in 2013 was a sign of things to come, Ratcliffe just threw his hands up and told Matt he had nothing for him. That should have resulted in a change of crew chiefs but Gibbs did nothing. Ratcliffe has consistently not been able to keep up with the track, how many times have we seen Kenseth come in to pit, Ratcliffe does his “magic” and Kenseth goes backwards. And again this year the crew chief and over the wall crew have let him down. Who was the loon that sent the fat guy with the sawzall over the wall? Good Lord what a disgrace that was. It’s no surprise Ratcliffe is gone after this year too, problem is it’s 4 years too late.

I’ve been wondering why, if the crew chief new about the seven man rule, didn’t he just name six crew men and tell them they’re the ones going over the wall?

I lost all respect for him when he purposely wrecked Logano. Buh Bye Matt, you won’t be missed.

I’ll still say Logano got exactly what he deserved there. And, it looks like Logano has somewhat learned from it.

Listen to the radio, the crew chief kept yelling 7 men, 7 men then just as Matt pulled in he yelled 6. Regardless, I’m glad Matt’s career is over. No more whining. Carl Edwards has to be cheering and laughing.