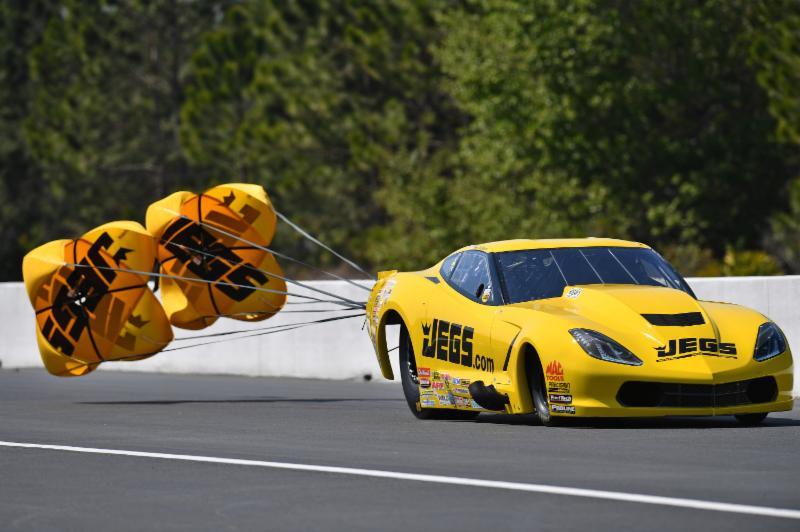 The Mello Yello Series professional classes have two races remaining to decide a championship, with only Las Vegas and Pomona left to close out the 2017 season. Steady Eddie Krawiec, who turned on the power at just the right time this season, has the best cushion with a 107 point lead over LE Tonglet in Pro Stock Motorcycle. Greg Anderson has the least breathing room with a couple of KB Racing teammates hot on his heels and holds only 15 point edge over Bo Butner and 30 over third-place Jason Line. With two races to go, all of the championship battles on the Mello Yello side are far from over.

It’s a different story for the J&A Service Pro Mod drivers, however. Las Vegas is it, the final race of their season. Two-time Pro Mod champion Troy Coughlin, brother of Pro Stock driver Jeg Coughlin, Jr., goes into the final race with the points lead, looking to bring home his third title in the class. In spite of his two previous championships, it’s an unfamiliar position as he wasn’t the points leader coming into the final race either time. This time he is the leader, holding 26 points over Mike Castellana. It’s a two-horse race, but it’s a really tight one with no margin for error.

“Unchartered territory,” said Coughlin. “We’ve never had the points lead at any time in the past except for the two times when we clinched our two championships in Vegas. We’ve obviously had great cars the last six seasons but we always seem to be chasing someone. Now the tables have turned.

“We know exactly what we need to do this weekend,” Coughlin said. “We need to qualify in the top half of the field and go to the semifinals at the very least. Then it doesn’t matter what else happens. We’d like to qualify in the top four and win to close the season in style, with the championship and another Wally.”

Don’t count Mike Castellana out just yet though. He won twice early in the season, at the Four-Wide Nationals in Charlotte and the Southern Nationals in Atlanta, setting up a scenario that had Coughlin chasing him all season before finally taking the lead after a win at the Midwest Nationals in St. Louis. Coughlin also has two wins overall, with a victory in Bristol this season to go along with St. Louis. Coughlin knows better than to take anything for granted.

“There’s a lot of excitement and a little bit of nerves,” said Coughlin. “But I know I’ve got Steve (Petty, crew chief), Kyle Pettis and Mike Rees behind me and they haven’t made a mistake all year. I just need to relax and do what we do and we’ll see how that turns out. This is a lot of fun and times like this remind you why you do this.”

Because technology is cool. Check out this hand scanner the NHRA uses to inspect parts.