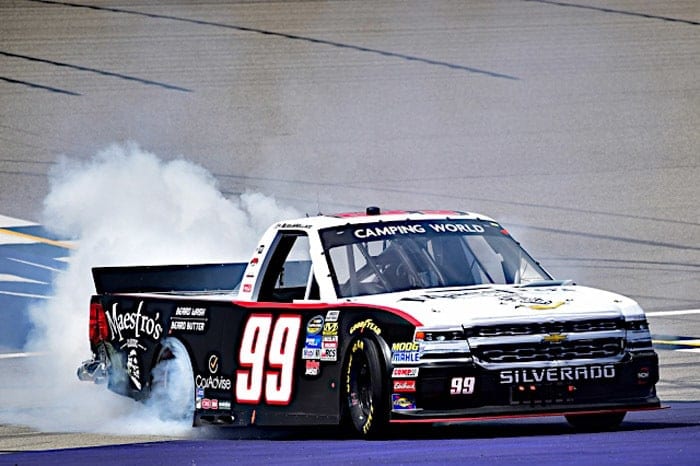 After taking the Kansas weekend off, the Camping World Truck Series is back in action Saturday afternoon at Martinsville Speedway.

While six drivers have their eye on making the Championship 4 over the next three races, another competitor will make his first series start since 2013. Cale Gale, who made just three starts during the 2013 season, was tapped last month to pilot the No. 99 Chevrolet for MDM Motorsports.

“My driving career has been a roller coaster for the past 10 years, and I’ve had some amazing opportunities along the way,” Gale said in a team release. “My happy place will always be when I buckle up my helmet, and I still have the burning desire to race at the highest level because I believe in my heart that I’m fully capable of being a competitive race car driver at any level.”

Gale, who currently works full-time for Roush Fenway Racing’s engineering department, will have long-time sponsor Rheem on the No. 99 truck.

“Rheem has been an amazing supporter of my career since 2008,” he continued. “I’ve been fortunate to represent the brand at many levels of motorsports, from the NASCAR XFINITY Series to being the first American to compete in the NASCAR Pinty Series in Canada to local grassroots racetracks across the Southeast.

“I couldn’t be more pleased to make a return to the NASCAR Camping World Truck Series driving the No. 99 Rheem/MDM Motorsports Chevy at Martinsville. I’m excited to represent Rheem, the team, my fans, family and friends and I’m ready to see what I can do on one of my favorite racetracks after being absent for four years.”

For long-time followers of the Truck Series, Gale’s name is a familiar one, albeit one that’s been missing for several years. He drove full-time for Eddie Sharp Racing during the 2012 season, scoring a single victory in the finale at Homestead-Miami Speedway in spectacular fashion when he pinned Kyle Busch against the wall in the final turn and took the victory by 0.014 seconds.

Many expected Gale would continue moving up the NASCAR ladder, despite only scoring eight top 10s in 22 starts during the 2012 season, instead he made just three starts in 2013, and faded into oblivion on the national series level.

“My career has been unique from most of the typical driving backgrounds at the top level. I’ve had to try to balance making a living outside of driving the race car as well as keep the dream alive of being inside the race car,” he explained. “Since the end of the 2012 season when I last raced in the trucks and then the birth of my son, I kind of take race car driving in stride. I’ve pressured myself to perform at the highest level since I can remember, and now when I race, I do it for fun and I do it when the timing is right and we are prepared properly.”

The start is a one-off for MDM Motorsports, which has fielded trucks for several drivers this year, including Brandon Jones, Timothy Peters and Darrell Wallace Jr., who won for the organization at Michigan International Speedway earlier this season. Despite that, Gale still looks forward to making the most of the opportunity.

“I was stunned when I was approached about this late last week,” Gale said in a Facebook post last month. “I want to thank my employer Roush Fenway Racing for allowing me to compete. I haven’t made a start in the Truck Series since the end of the 2013 season. I’m humbled and blessed beyond words.

“I look forward to going out there and driving the tires off of it possibly one last time, possibly not. But I will drive every lap like it’s my last. Thank you to everyone who has helped me and supported me through the years.”

Gale has nothing to lose this weekend, so it wouldn’t be at all surprising to see him taking risks others might not be willing to take. And since MDM Motorsports has shown quite a bit of promise this season, despite being a single-truck organization, it’s not at all unrealistic to expect Gale could have a shot at competing for the win.