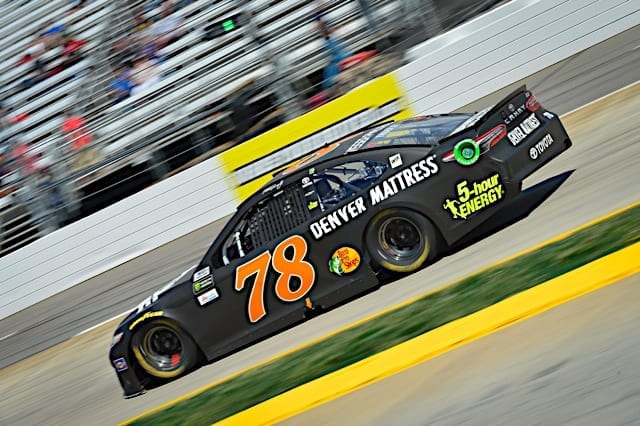 Though we’ll later discuss whose best shot at advancing to the Championship 4 at Martinsville Speedway, here’s one guy whose best opportunities come but every week in the 2017 Monster Energy NASCAR Cup Series season.

Martin Truex Jr. has lit the sport on fire since 2015, turning the gas pump loose in February, unleashing seven wins (half his career total of 14),a season-most top fives, top 10s, laps led and so forth.

His weakness? Well, he doesn’t seem to have one, but if there’s a track at which he hasn’t synced as well as others, it’s Martinsville Speedway. Despite leading 189 laps in the last two races, the result hasn’t matched the speed, finishing seventh and 16th, respectively.

In fact, you’d have to go back to 2012 to find the last time he grabbed a top five here (more than five years!). It’s surprising to see the sport’s dominating presence have a track slip through the cracks of excellence. But overall, it’s been the norm for Truex and Furniture Row Racing.

After all, neither has ever won a short track race to begin with. Truex has 24 starts at Richmond Raceway and Bristol Motor Speedway and will make his 24th start at Martinsville Sunday. No wins, in the meantime, for the intermediate king.

But momentum must mean something. Truex has won half the playoffs and has gone only three races since May without leading a lap. Short tracks have been butter for Truex but only until the checkered flag is in sight.

Something — from accidents, bad pit strategy, loss of track position — has caught Truex and team by surprise. Even while in their prime. Will they avoid this gremlin and tame a short track?

Who Wins the Battle at Martinsville, Kyle Busch or Brad Keselowski?

In an era seemingly filled with short track talents of all ages, Martinsville this weekend is well-timed, and at a perfect position on the Cup calendar.

Fresh off two of the craziest races of 2017 at Talladega Superspeedway and Kansas Speedway, the only short track of the playoffs naturally leads us to the Round of 8, where 50 percent of the remaining field will be tossed from the Championship 4 at Homestead-Miami Speedway.

Already, we’ve seen the best of the best showcase their skills at the half-mile in 2017, that being Kyle Busch and Brad Keselowski in the spring race. There, they fought hard but clean in the closing 100 laps, trading the top spot five times before Keselowski pulled away for his first Martinsville clock.

The second time around, who beat out the other? Of course, circumstances are different after more than six months of racing. Busch overcame some gremlins in the Round of 12 to advance to his current position while Keselowski advanced through victory at Talladega.

On the subject of needing a win, most hands point to Keselowski, who has openly admitted Team Penske’s weaknesses on the 1.5-mile tracks this year. With Texas Motor Speedway and Phoenix International Raceway — where he sits winless with only one top five in the last five starts — on the horizon, this place may be his best shot at Miami.

Not only does he have that spring win, but it also came after a fifth and two runner-up finishes since 2015, leading 277 of his 287 career Martinsville laps led in this time frame. He sure has found his stride.

The only man better lately was the guy he beat last time out in Busch, who has put together four straight top fives at the Paper Clip. His dominating win in 2015 finally took the place off his winless list and put him on the must-pick list for future Martinsville events.

Whose Championship 4 Opportunity Lands in Martinsville?

Keselowski isn’t the only one who may find their best championship breakthrough at Martinsville. There’s a small window of opportunity for two others at this upcoming short track.

With six spots currently within 20 points (two stages of points) apart entering the Round of 8, it only makes Sunday’s First Data 500 even more prevalent for Chase Elliott and Denny Hamlin.

Elliott is a guy who has had a few hallmark moments in Virginia. Making both his Camping World Truck and Cup series debuts there, the speed finally met the pavement in the spring when he started second, led 20 laps and finished third.

That day, he also stole a stage win after leader Kyle Busch was bumped wide in the final corner.

Though the second-year Hendrick Motorsports guy has turned up the volume for the playoffs, his best finish this season from the next three tracks came at Martinsville. Additionally, Martin Truex Jr. and Kevin Harvick are epic at Texas and Phoenix.

Denny Hamlin is someone everyone thinks of when Martinsville comes around. He went on a tear at this place early, scoring four wins and eight top fives from 2006 to 2010 alone. But recently, the results have been feast or famine, finishing third, 39th, third and 30th the last four races.

No consistency here, but at least he gets the top results unlike Texas, where he has zero top fives since 2010, and Phoenix, finishing top five only twice since 2013.

Will Anyone Catch Johnny Sauter and Christopher Bell in Martinsville?

From this point forward, the Camping World Truck Series will be aligned perfect with Cup. The final round of elimination starts now and ends in two weeks with the championship to race for in Homestead. Nice and simply, at last.

But the stories are a little different between the two series.

With Christopher Bell the series’ top driver this year in every category, Johnny Sauter has been the next best thing. These two sit 1-2 in points, 34 and 14 points to the green in the Championship 4 entering Martinsville.

But behind them, the remaining four drivers have been racing for the extra positions left behind, scoring five wins among them, while Bell and Sauter combine for seven.

For this weekend’s Texas Roadhouse 200, it’s about building a stable base for the final two races of the Round of 6. Matt Crafton, who is third in points, is on track to score his least amount of top fives in a season since 2007 (four). Compounding his pressures, the two-time champion is only one point above the cutoff.

The guy on the outside looking in behind him? Ben Rhodes, who has managed to equal or surpass his numbers in his second Truck Series season. A playoff win at Las Vegas Motor Speedway secured his position,med and a consistent couple months have kept him around.

With only one finish worse than 11th in the last eight races, Rhodes has been able to merge strong trucks with clean laps seemingly for the first time in his career. Just in time.

Austin Cindric has also been accustomed to this consistency thing. With a win in the middle, the Brad Keselowski Racing rookie has scored 10 top 10s in the last 11 races. The No. 19 Ford enters the weekend seven points back of the top four.

One guy who hasn’t had consistency is John Hunter Nemechek, who edged Chase Briscoe through advancement at Talladega to stay alive. The gift of luck at Talladega brings Nemechek to one of his best tracks in Martinsville, where he finished second, second, third from 2015 to ’16.

The top two may be in relatively good hands, but the battle is on for the two spots behind.