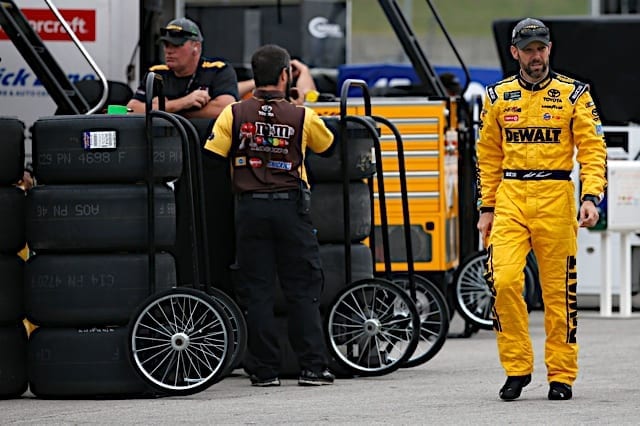 Last weekend’s race featured the second cut in the Monster Energy NASCAR Cup Series playoffs, and among those out is veteran Matt Kenseth, who was parked by NASCAR for having too many crew members working on his car under the damaged vehicle policy.  Is the consequence for that particular infraction too harsh, or is this one entirely on the No. 20 team?

Amy Henderson: The whole damaged vehicle policy flies in the face of what the sport should be about.  Teams getting back out and running to the end is as much about pride as it is about points.  However, give some props to NASCAR for being consistent with this rule from the start.  It’s on the teams to know the rules and follow them, so, the call was the right one given the circumstances. It seems as though fans want NASCAR to be consistent with the rules, until they are.

Christian Koelle: It was a little harsh, but it’s been the rule since we started the 2017 season. One mistake cost Matt Kenseth an opportunity at the championship, but in the long run, Kenseth had every shot at collecting stage points and winning the two races in that round, and, well, he didn’t. He and his team put all of their marbles in one basket and in this elimination format you can’t do that, make a mistake and hope luck is on your side, especially with how little margin there is in the competition this season. The team made a mistake, and that led to its elimination, end of story.

Beth Lunkenheimer: The No. 20 team needs to take full responsibility for this one. It’s not like NASCAR created a new rule for the Kansas Speedway race weekend, and several other teams have been hit with the same penalty previously, even if they weren’t as high-profile as a playoff contender. That said, something the sanctioning body needs to look at overall during the offseason is consistency in penalizing teams for the same rules violations, regardless of the individual circumstances.

Vito Pugliese: It’s a little of both. While a substantial penalty and the equivalent of getting your hand cut off for shoplifting, something of this size should be very much on the mind of the crew chief, who is in fact responsible for the crew. Prior to anything having started, Jason Ratcliff should have had his team rallied around and each member, numbered one through six, know what they are going over the wall for. With the absence of crash carts and half the tools needed to rebuild the car at the ready no longer a real concern, the emphasis must be ensuring that a rule that gets you disqualified is made keenly aware to all team members and not broken. With that said, is it worthy of a DQ? Absolutely not. A one-lap penalty would be sufficient and consistent with the penalty at any other time for guys going over the wall too soon or too many servicing the car on a pit stop.

Richard Petty Motorsports announced Darrell Wallace Jr. as the next driver of the No. 43 for 2018, but that team still has some unanswered questions.  Can Wallace take RPM to the next level despite the uncertainty?

Pugliese: While I am ecstatic that Darrell Wallace Jr. has a ride for 2018, I am concerned about the status of the kingdom of Randleman, N.C. Their shop is for sale, and other than military t-shirt company Grunt Style known to be a sponsor next year, it would really suck if the No. 43 ended up being a rudderless entity with a patchwork of sponsors and no real technical alliance to help support the one-car operation. The word is that there are additional sponsors coming into the sport to join RPM because of the Wallace sponsorship, but then the question of a technical alliance comes into question. No word yet on whether RPM remains a Ford team, and with what organization would it partner? It seems it would be a no-brainer to pair it with Team Penske given the relationship between Wallace and BFF Ryan Blaney. Rumors have swirled most of the summer that RPM would be moving to Chevrolet with support from Richard Childress Racing, but nothing has been made official yet. In any event, it’s great to see Wallace finally land a long-term deal in the top tier of American motorsports.

Michael Massie: The No. 43 will have a bigger spotlight on it due to Wallace’s diversity, popularity and talent. While the team has struggled for sponsorship, if Wallace performs well, the potential is there to attract greater sponsors. More sponsors equals more money and more money equals speed. Also, Wallace’s hiring should quash some people’s labeling of Richard Petty as a racist because he said he would fire anyone that knelt for the national anthem. Now, three of RPM’s last five drivers have consisted of an African-American, a Cuban-American and an Australian. Name another team that has had such a diverse pool of drivers.

Wesley Coburn: Time will tell, but I doubt it. RPM just doesn’t have the sponsorship coming in right now to upgrade its equipment, and it doesn’t even have a set location on its home base for next year. There wasn’t any word of a manufacturer in the Wallace announcement, either. Wallace won in Kyle Busch’s trucks, yes, but almost any driver racing for KBM can get to Victory Lane. He didn’t win at Roush Fenway Racing in the XFINITY Series, and it has had strong cars in that series for the last few years (see: Chris Buescher’s 2015 championship). I don’t think Wallace’s driving skills can overcome all the other obstacles the team is facing.

Phil Allaway: If the four races Wallace had in the No. 43 are any indication, it appears that he can definitely help the team.  While Almirola’s form has improved recently, the team has been mid-pack at best for much of the year.  Provided that Wallace can keep ridiculous stuff from happening (Example: The multiple speeding penalties in his debut at Pocono), Wallace should acquit himself well.  The anger fainting will be a thing of the past.

Richard Childress Racing, despite making the playoffs, has struggled to keep pace the last few years. It also made a new hire, adding veteran Andy Petree as a team advisor.  The team has a seat to fill in the No. 27 Cup ride for next year.  Can RCR regain its status as a perennial contender as it makes offseason personnel moves?

Koelle: You look at RCR’s two victories, and they were really won with luck. Even though we know the No. 27 will be racing next season, the uncertainty of who’ll be driving it makes things kind of foggy, especially when the team as a whole doesn’t know who it’s working with next year. It’s a struggle to be a perennial contender against powerhouses, especially when the team isn’t one right now. The future is very foggy for the organization, and I don’t really know what can be done to fix it.

Lunkenheimer: Bringing Petree on board is a step in the right direction for the team, which is barely treading water this year. After all, take a look at the victories by Austin Dillon and Ryan Newman this year. Was either one really expected? Much like the previous question about Wallace, it’s unrealistic to think there will be overnight improvements any time changes are made. Yes, you can make adjustments and put people in place, but Rome wasn’t built in a day, and a team isn’t going to become a contender overnight. It’s as simple as that.

Massie: If RCR can land a driver like Matt Kenseth, he could elevate the team’s status and be an excellent tutor for Austin Dillon. If the team drops down to two cars or gets an average driver in the No. 27, the team will continue to decline. Childress and Petree are proven winners though, so eventually RCR will get back on track, just maybe not next year.

Coburn: RCR has been treading water pretty much since Kevin Harvick left for SHR. With losing Menard’s sponsorship money to Team Penske and the Wood Brothers, that doesn’t help, either. I don’t think it can climb upward with Ryan Newman – he’s consistent but not winning much – and Austin Dillon is too loathed by fans to become as popular (and sponsor-friendly) as other younger racers like Chase Elliott or Ryan Blaney.

The Cup Series kicks off the Round of 8 this weekend in Martinsville.  Among the title hopefuls are Jimmie Johnson, the active win leader at Martinsville, Virginia native Denny Hamlin, local favorites Wood Brothers Racing with Ryan Blaney, and winless Chase Elliott, all of whom start the round below the cut line.  Will one of them add to the track’s legend this weekend and punch a ticket to Homestead-Miami Speedway?

Massie: Hamlin, like every year, has been great at the flat tracks this season. He won at New Hampshire Motor Speedway and Darlington Raceway (encumbered) and has been competitive just about everywhere else of late. His consistency will pay off at a track at which he is a five-time winner. Besides, does anyone not in a Toyota really have a chance? The Virginian will clutter his house with yet another grandfather clock. If he raced the Ray Hendrick tribute again, he would lead every lap and lap the field because the Flying 11 couldn’t lose at Martinsville—it won 20 times with Hendrick behind the wheel at the paperclip.

Coburn: Chase Elliott has been THIS CLOSE to getting his first win since the playoffs started, and he finished third at Martinsville in the spring. He takes the checkers.

Henderson: Jimmie Johnson drives Martinsville about as perfectly as it can be driven, every time.  But if one of these four is going to win (and all four will need a win if they’re going to make the title race), it will be Denny Hamlin.  Why?  Look no further than the logo on the hood.

Pugliese: You can see how this is going to develop, and it started three weeks ago. Jimmie Johnson was not penalized for having lug nuts tightened while outside of his pitbox. Many fans hastily took to forums and call-in shows, claiming a conspiracy for NASCAR trying to get the No. 48 to Homestead so he has a shot at championship No. 8. That seemed a bit harsh given the response that it was apparently a known exception due to safety concerns – and followed up by the Talladega penalty for working on the car before the red flag had actually been rescinded. Johnson will almost assuredly now win this weekend at a track where he has wins over his career, sending him to Homestead with a shot at winning his record-breaking eighth title. Why? Because by some cosmic twist of fate, this is what will happen, simply because it’s NASCAR, and weird stuff seems to happen that way. Should it play out, the one-race playoff format will be completely invalidated, and NASCAR will be forced to go back to the drawing board, yet again.

7 thoughts on “Friday Faceoff: Did NASCAR Go Too Far with Penalties?”