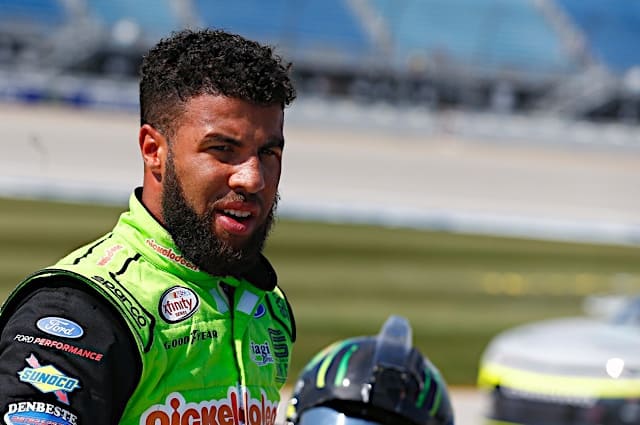 The news of Darrell Wallace Jr.’s full-time move to the Monster Energy NASCAR Cup Series in 2018 was met with a fair share of excited NASCAR fans, some of whom have been waiting for Wallace’s breakout on the national NASCAR stage since he ran his first races in the XFINITY Series five years ago.

And while Wallace’s 2018 season, in which he’ll drive the No. 43 for Richard Petty Motorsports after substituting with the team earlier this season, may still not be the year that thrusts him to superstardom, it does give the Cup Series something it’s had just three other times (and only once before 2014): a graduate of its Drive for Diversity program in a full-time Cup ride.

Since its inception in 2004, NASCAR’s Drive for Diversity has championed competitors racing from different backgrounds than the general makeup of its starting lineups across the United States. It’s a program that’s attempted to assist women as well as minorities climb the ladder of the sport, providing opportunities in NASCAR racing series on both a regional and national level.

Wallace was part of the latest crop of drivers added to the program in 2010, and he retained a spot in 2011, during which he competed full-time in the K&N Pro Series East (as many D4D drivers often do, whether in the East or West series), scoring five wins in the process. Earlier this year, his Cup debut made him the fifth member of the program to compete in at least one Cup event. The others? Aric Almirola, Kyle Larson and Daniel Suarez, all of whom currently compete full-time on the Cup level, and Paulie Harraka, who started a single race in 2013.

But among the nearly five dozen drivers who have spent at least one season as a Drive for Diversity member, how many have made it past the K&N ranks to a ride in one of NASCAR’s three national series? With Wallace’s pending entrance into a full-time Cup ride, let’s run down the list of drivers who made it to a green flag in the Cup, XFINITY or Camping World Truck series — plus three who attempted at least one race.

A bit of a weird one here to start it off. Aric Almirola was part of a Drive for Diversity-esque program that existed before NASCAR’s official one; it was put on by Joe Gibbs Racing. It’s sort of murky to find a definitive answer online as to whether he was indeed part of a later NASCAR-sanctioned D4D program once it began in 2004 or if he was at an arm’s length of the original class but technically part of JGR’s instead. If NASCAR claims him as one of its own in terms of its own program, then he’s certainly its earliest benefactor, and he remains a threat to win even in 2017.

A newcomer to the XFINITY Series in 2017, Enrique Baca was a 2016 D4D driver and remains a part-time competitor in the K&N Pro Series East, scoring three top 10s in eight starts this year. The 26-year-old drove a pair of races for Motorsports Business Management in 2017 with a best finish of 18th at Mid-Ohio Sports Car Course, driving the No. 13.

Mackena Bell first appeared on the NASCAR scene in 2010 while in the midst of a five-season stint in the D4D program (2009-2013). She eventually contested one XFINITY race, driving for Rick Ware Racing at Phoenix International Raceway in 2014; she finished 29th, six laps down, in the No. 23.

One of the three drivers on this list who attempted but failed to qualify for a NASCAR national series event. But don’t count out Madeline Crane just yet, as she’s one of the 2017 class members. The 19-year-old might have competed in the 2015 Truck Series event at Eldora Speedway had it not been for a DNS in the last-chance qualifier due to extensive damage.

Marc Davis was one of the earliest success stories of D4D, or at least one of its most visible graduates early on. After becoming part of the program in 2006, Davis eventually ran 10 XFINITY events beginning in 2008, some for esteemed programs like Joe Gibbs Racing but others for his family-owned team. His best finish remains a 16th-place run at Gateway Motorsports Park in the Truck Series in 2008, and his last national start came in 2011.

Possibly better known to followers of the ARCA Racing Series, where she competed in seven races in 2017 (two top 10s) and will do so full-time for Venturini Motorsports in 2018. The 2015 D4D member’s only NASCAR national attempt came last year at Martinsville Speedway in the Truck Series, failing to qualify the No. 14.

Natalie’s cousin. Paige Decker part of the 2014 D4D class, first ran a Truck event in 2015, finishing 30th at Martinsville for Mike Harmon’s No. 74. She ended up a few better with the same team in 2016, concluding the spring Martinsville race 25th, and linked with Obaika Racing in the XFINITY Series for a pair of starts, both of which ended with 31st-place runs.

Bruce Driver was part of the inaugural D4D class in 2004, but he made no national series starts during that time or even after it. He did, however, run a Truck race at Richmond Raceway in 1999, finishing 27th, four laps down.

Ruben Garcia Jr., a native of Mexico City, has been a member of D4D since 2016, following his 2015 championship in the NASCAR Peak Mexico Series. He’s scored four top fives and 17 top 10s in K&N Pro Series East competition since, and in three pre-D4D XFINITY starts in 2014, he scored a best finish of 24th at Phoenix in SR2 Motorsports’ No. 24.

You might remember the name as a former development driver at Richard Childress Racing. That’s the team for which Ryan Gifford competed in his debut XFINITY start in 2013, scoring a ninth-place finish in the No. 33 at Iowa Speedway. However, he’s only been heard from once since, driving Biagi-DenBeste Racing’s No. 98 in 2014 to 20th at Iowa. He scored a win, 16 top fives and 26 top 10s among 70 K&N Pro Series East starts between 2009 and 2014.

If Aric Almirola isn’t counted as a D4D graduate, then Paulie Harraka ended up being the first of the program to actually start a Cup race when he ran at Sonoma Raceway in 2013. His No. 52 didn’t have the best of days, finishing 39th, 21 laps down, after being involved in a wreck. A 2012 attempt at a full-time Truck effort with Wauters Motorsports also ended prematurely after half the season and no top 10s.

Has there been a more high-profile graduate of the program, a decade and some change in, than Kyle Larson? Certainly not yet. Larson, part of the 2012 class, was in a truck by the end of that year and a full-time XFINITY ride the following February. Though he’s most recently out of the running for his first Cup championship, he still has five wins in the series, a number that’s sure to increase over the next few years.

The third of the D4D graduates who have attempted but not yet qualified for a NASCAR national series race, Sather was part of the program in 2009 and later attempted a pair of Truck Series events for Make Motorsports in 2012, both ending in DNQs.

Of all the drivers mentioned on this list, only one currently has a national series championship, and that’s Daniel Suarez. After racing in D4D in 2013 and 2014, excelling in both the K&N Pro Series East and the Peak Mexico Series in the process, Suarez became the 2016 XFINITY champion for Joe Gibbs Racing, which led to his 2017 rookie run on the Cup level following Carl Edwards’ surprise retirement.

In 2013, Wallace became just the second African-American driver to win a NASCAR national event and the first since 1963, following in the footsteps of Wendell Scott when he prevailed at Martinsville in the Truck Series for Kyle Busch Motorsports. It’s been a volatile rise to the top for Wallace since, one highlighted by sponsor woes that took him out of full-time competition earlier this year, but it will culminate in his rookie Cup season in the No. 43 in 2018.

Will you please stop labeling people. Treat him like a man and not some ….
Darrell is half white Why does that make him African American?
Kyle was gonna race to be a star, the program got him there a little sooner.
Daniel apparently came in so very well funded …that had to help

Bill B
Reply to  jim

Diversity is just another example of the deterioration of American culture. Ability and proficiently doesn’t matter as long as there is one of these and two of of those and some of them. Enough is enough if I want to hear about diversity I’ll turn on CNN.

Great. Wallace has been signed to a team that has no manufacturer, no sponsor and, oh yeah, no shop. If by some chance all those things come together and they are able to scrape together and entry he will do an excellent imitation of Danica Patrick. While Ryan Preece sits at home.