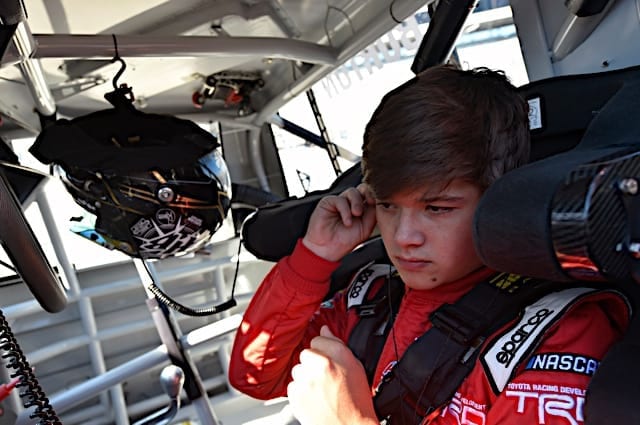 Harrison Burton has already won the K&N Pro Series East title this year. Now, he has gotten his first taste of success in the Camping World Truck Series, scoring a fourth-place finish in the Texas Roadhouse 200 at Martinsville Speedway on Saturday (Oct. 28).

The transition to Trucks had been a difficult one for Burton, with his previous best finish being an 11th in six career starts. Saturday’s race was the first time he has been able to show the competitiveness that he displayed in the lower ranks, and it rewarded him with his first career top five finish.

“[I] maybe had a shot at the win,” Burton said. “Really proud of my guys. [They] gave me a great truck all day…and stayed on top of the race track. It changed quite a bit throughout the day.”

“It was a good day for KBM,” Burton said. “Really proud of Noah [Gragson], he’s been wanting that one for a long time. He deserves it. He’s a good guy.”

Despite seeing his teammate win, Burton would always rather win himself.

“A young guy that is coming up through the ranks and is trying to prove himself and goes out and gets it done at a short track like [Martinsville], it’s cool, it’s good for the sport,” Burton continued. “But I’m here for me. I wish it was me up there even though it’s one of my buddies, Noah.

“I’m sure if he was in my position, he would say the same thing,” Burton said.

With the exception of Gilliland, Burton was the least experienced driver in the top five. However, Burton says that he doesn’t feel like he lacks experience.

“The kids coming up now have so much experience,” Burton said. “I started racing stock cars when I was 11 years old. I have six-and-a-half years of stocks cars and I’m only 17.”

It is fitting that Burton picked up his first career top five at Martinsville, as it is his father Jeff Burton’s home track, being only a little over 60 miles from South Boston, Va.