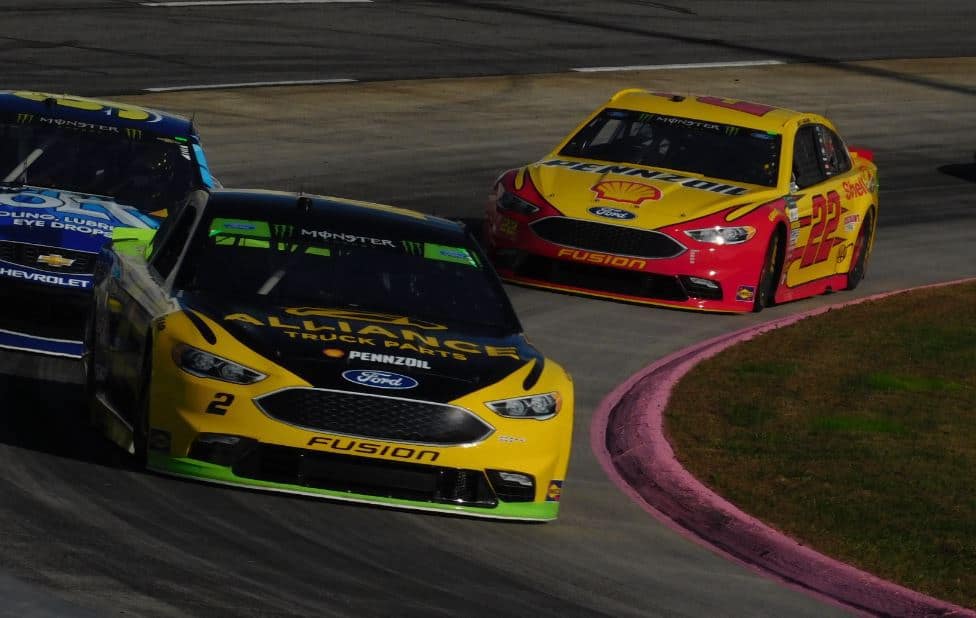 Brad Keselowski was one of the dominant cars in the First Data 500 at Martinsville Speedway on Sunday  and was cruising to a victory… until everything spiraled out of control.

Keselowski won the first two stages of the event and led a total of 108 laps, gapping second-place Chase Elliott with eight laps to go when Team Penske teammate Joey Logano blew a tire and spun as a result of contact with Kyle Busch. In one moment, Keselowski’s lead evaporated, in addition to his automatic ticket to compete for the championship at Homestead-Miami Speedway.

On the ensuing restart, Keselowski chose the outside line and gave Elliott the inside line. The two racers battled hard for a lap before Elliott drifted up the track and used up Keselowski to take the lead.

“Everybody’s trying to get all they can get,” Keselowski said. “You know it’s coming. You just hope it’s enough so you can keep going.”

The 2012 champion sailed up into the third lane and fell back like an anchor.

Keselowski said the only thing he could have done differently is choose the inside line on the restart.

“It’s the way the track is. It’s slick,” Keselowski said. “It takes about 10 laps for these cars to get going. You have those restarts there at the end… You get a lot of this rubbing and beating. That’s what short track racing I guess is about.”

Thanks to another restart and a huge pileup at the finish-line, Keselowski rebounded to finish in fourth place. He won the first two stages of the race, so Keselowski comes out of the day with a 29-point advantage over fifth place Jimmie Johnson, sitting third in the championship standings.

Despite the solid points day, Keselowski can’t help but think that one got away.

“Would love to win and take a lot of stress off the next two weeks,” Keselowski said. “We scored a lot of points and that’s something we can build on.”

Keselowski said he does not plan on talking to Elliott about the incident.

Despite the madness that ensued at Martinsville, Keselowski said he still wants more short tracks on the schedule.

Logano probably cost Brad the win. If he had pitted with the tire rub before the tire blew like everyone knew it would the caution wouldn’t have come out and there might not have been another one. But the 23, 32, 83. etc were still in the event. The 66 had already done his job.

I’m sure everyone watching Brian’s product couldn’t believe Brad chose the inside line on the restart. I wasn’t the only one who figured that Elliott would run Brad up the track in the first corner.

Elliott shouldn’t have been surprised at what Hamlin did but I thought it was a bit excessive.

The damage from the last restarts must have put a big smile on Brian’s face. If he was watching! Fat chance.

Judging by the way Elliott’s tires were moving in and out there should be no way it would have passed inspection. The spin took care of that.

Maybe, Maybe not. We don’t have a crystal ball to know for sure. Short track racing does led it self to all sorts of funky things. Including the darling JGR GIRLS doing what they do best, eliminate and obliterate. Especially when it is “the playoffs”. The checkers tell the winner, not the guy or gal 7 or 10 laps ago that was in the lead. It is what it is, but the hysteria is over the top. What I am seeing from most is, they don’t think Brad can get it done. But at DEGA they swore Logano let him win. Fickle, fans to the point of insanity. So one race he let him win, the other race ….caused by Kyle and he is the bad guy who gets the hate and cost BRAD THE HOMESTEAD CUP. GOOD GRIEF. NOT YOU DONINAJAX, just the attitude in general, I have been reading with humor and horror!

Some cannot win, no matter what the circumstance. The whole thing is a farce, glad I did not watch, have not in some time, but did watch a clip to see what the chatter was about, and I had to laugh at the hypocrisy and WWF actions. God, STAMFORD CT. is proud!, wonder if they get huge consult fees?

It’s true that Kes might not have won even if Logano pitted before he spun out, but that’s still a crappy teammate. Logano’s out of the playoffs and wasn’t in contention for the lead at that point, while his teammate was just a few green flag laps from Homestead. Even if not for a teammate, unless you specifically want to spite the guy leading the race, you should pit in that situation, unless he’s hoping that he’ll spin out and take out a contender, which is a prick move like the one he pulled in Kansas with Kenseth a couple years ago, and look what that got him.