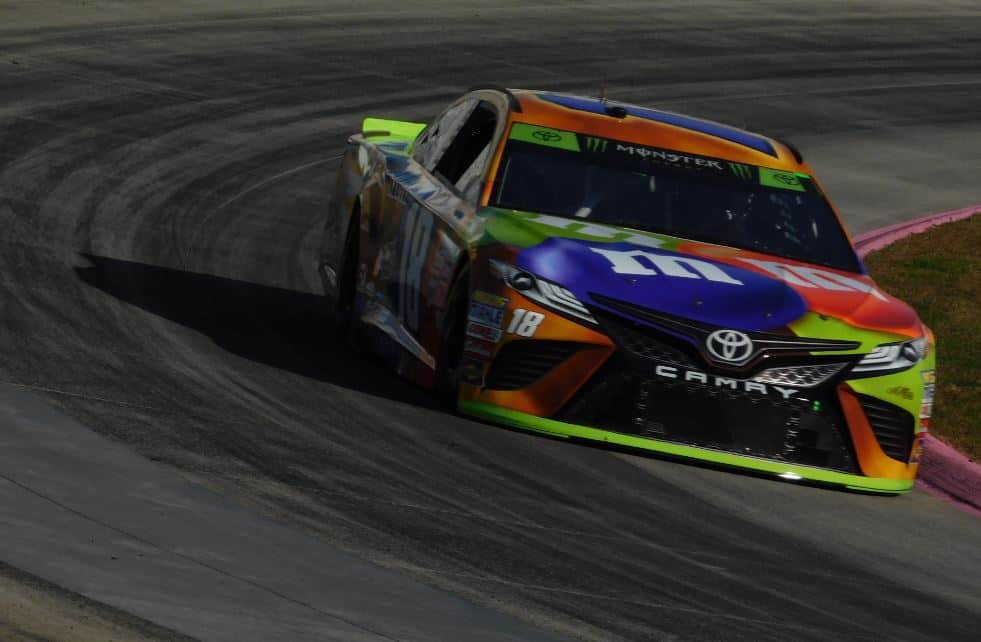 After Chase Elliott, Brad Keselowski and Denny Hamlin slid to the side, it was Kyle Busch who drove through to score victory under the lights at Martinsville Speedway.

Holding off a side-by-side battle with Martin Truex Jr. in the final corner, he beat the No. 78 car back to the gas to win for the second time at Martinsville, and fifth of the 2017 Monster Energy NASCAR Cup Series season. Most importantly, the win advances Busch to the Championship 4 at Homestead-Miami Speedway.

“We just ran up front and certain circumstances led us into Victory Lane,” Busch said. “We had a good, consistent car. With all that stuff at the, we shot right up there and got the win.”

The man up front changed hands a few times in the closing laps of Sunday’s First Data 500. It all took a thrilling turn when Chase Elliott was turned by Denny Hamlin in Turn 3 for the lead. The contact led to a final restart between Hamlin and Busch, where Busch came out on top.

Truex sneaked by to finish second, losing the race win by only 0.141 seconds.

“I don’t know if I would’ve done anything different,” Truex said. “The hole opened up, I drove inside Kyle and I wasn’t going to just run into him. That’s not how I do it.”

Clint Bowyer finished third followed by Keselowski and Kevin Harvick. The majority of the top 10 crashed across the finish line, an accident sparked when Hamlin spun off Turn 4.

Harvick was unhappy with Ryan Blaney after the race, as the two raced with plenty of contact mid-race.

The closing 40 laps held most of the chaos seen on Sunday, as the race was a fairly clean day/night of racing. The first caution flew on lap 35 when Ty Dillon and Ricky Stenhouse Jr. spun in Turn 2. From then on, there were two green-flag runs of 90 or more laps.

Ahead of the pack for most of the day may have been Kyle Busch, leading 184 laps, but Team Penske held a strong day with pole-sitter Joey Logano and Keselowski. The duo led 167 laps, finishing 24th and fourth, respectively.

Let me be the first to whine. Terrible race. Very boring. Not exciting at all.