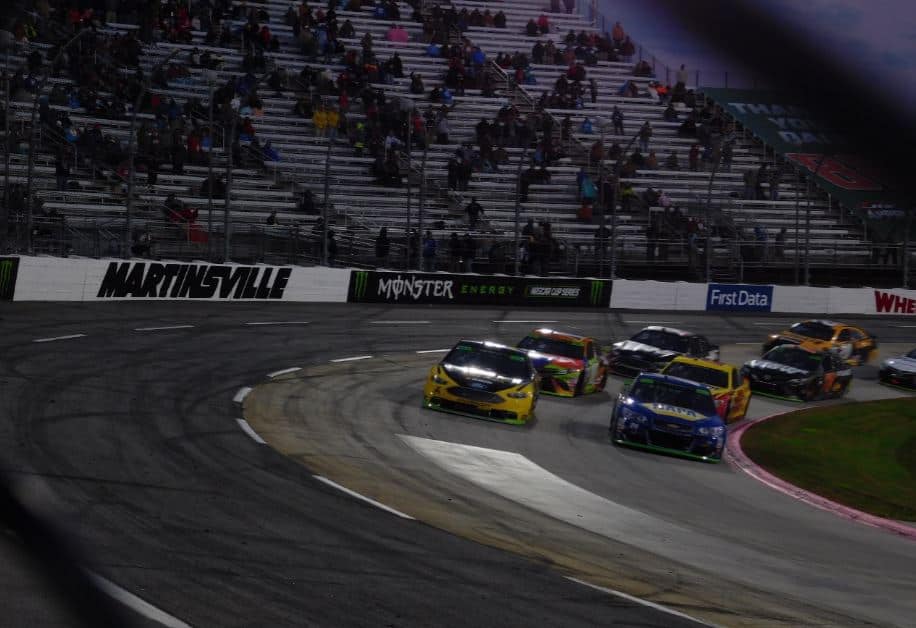 It is a well-known fact that NASCAR has been in the decline since it peaked in the mid-2000s.

Ratings are down and the seats at the track have not been in as high of demand as they were a decade ago. People have chalked that up to various things, such as the introduction of playoffs, stage racing and the cars getting away from truly being stock cars.

After seeing the First Data 500 at Martinsville Speedway, it is evident that none of those theories are why NASCAR’s numbers has been going downhill. The reason is that the actual product — the racing on the track — has been lagging and boring due to the current aero package that prevents beating and banging and the huge tracks that allow for the cars to get spread out

Martinsville is such a tiny track that there is no such thing as gapping the field.

Whenever Chase Elliott or Kyle Busch built up decent leads on Sunday, they hit heavy lapped traffic and it allowed for Brad Keselowski to catch back up. There were only about five cars that were good enough to win, but it was still a great race because there was always action somewhere on the track.

Drivers were able to pound on their competitors cars because aerodynamics hardly matter at Martinsville. It is one of the few tracks now where the cars don’t get anywhere near 200 mph; they don’t even hit half of that speed at The Paperclip.

The awesome racing that Martinsville provides, combined with stage racing and the building drama of the playoffs made for the best race of 2017. It may have even been one of the best races I have ever seen.

This race wasn’t the wreck-fest that people will claim it to be. Most of the field piled up at the finish line, but that was one of only a few incidents. The rest of the race was filled with rubbing, and as Harry Hogge in Days of Thunder said, “Rubbing is racing.”

Denny Hamlin has already received much criticism for spinning out Chase Elliott at the end of the race, but that was not dirty driving. It was racing at the purest of levels, racing at the grassroots level.

Back in September, Martinsville hosted the ValleyStar Credit Union 300, the biggest late model race in the country. That race was filled with wrecks and the fans loved it. There were so many wrecks in the Last Chance Race alone that it had to be shortened from 25 laps to eight laps.

“I watched a late model race here a month ago that was the exact same thing,” Hamlin said on Sunday. “It’s short track racing.”

Hamlin apologized in a Tweet after the race, but he had nothing to apologize for.

It makes for great entertainment. Let’s be honest with ourselves and quit pretending to be better than that. Everyone that watched the end of the Martinsville race was filled with excitement. It was certainly better than the snoozers we have seen at the 1.5-milers this year.

Elliott and his fans have every right to be mad, but that’s racing, you have a winner and you have losers. All of Hamlin’s criticism outside of that group needs to instead thank him for the show.

Besides, didn’t Dale Earnhardt to the same thing to Terry Labonte on two different occasions at Bristol Motor Speedway?

We celebrate those two moments as two of the best ever at Bristol. Anyone that enjoyed those finishes and despises the way that this race at Martinsville ended is a hypocrite.

The bottom line is that we need for drivers to be this aggressive when going for the win. We need more race tracks like Martinsville where the cars aren’t going over 100 mph, so that aggressive racing is not as dangerous.

Keselowski dominated the race at Martinsville before being knocked out of the way by Elliott. He was bummed about the result, but he still maintained at the end that NASCAR needs more short tracks.

Rubbing is racin’ but wreckin’ is wreckin. Dale Sr’s wrecking of Terry Labonte is not widely celebrated even today, so many years after the fact. Those were two of the very few occasions that Dale was vociferously booed at a track that he “owned” and he actually needed protection of the local sheriff’s deputies to safely go from Victory Lane to the Press Box after the race for interviews. That is the reason that Hamlin was booed so ruthlessly at his “home track” where he has been a dominant driver. Any unskilled Neanderthal can plow into a driver and wreck him, but skilled race car drivers are supposed to be able to “get ’em loose and move ’em out of the way” without wrecking the other driver. This isn’t demolition derby and these guys are supposed to be the best in the world, so they ought to be able to beat and bang on each other (rattle his cage”) such as Harvick & Blaney did without wrecking the other and completely destroying the finish for another competitor. For the record, there wasn’t a single driver commenting on TV after the race who defended Hamlin’s actions as “good, hard racing.” Hamlin’s own apology afterwards spoke volumes in expressing his regret for dirty driving.

Yes, the race yesterday pointed out why losing the short tracks that made Nascar so popular was short sighted and stupid. It also pointed out why having a ‘playoff’ in racing with an entire field of cars on the track is ridiculous. The difference between what happened at Bristol and what happened at Martinsville is that Chase may have lost his shot at winning a 10 race title because Hamlin didn’t have the skill set to move him without wrecking. Since an entire season can now come down to a 3 race lucky streak, the consequences for the action is much larger. As much as Hamlin can apologize, he can’t change the fact that, without a win, Chase is dead in the water for the finale. Nice work BZF.

it’s like the old adage ” if a tree falls in the forest and nobody hears it does it make a sound?” Point is if nobody is watching does it really matter. And really is the salvation of nascar a bunch of guys wrecking at the end of a boring race?
I don’t think so either.

When Chicago comes up for a re-pave, it needs to be bulldozed and shortened to 1 mile or less. Short tracks deliver the action.

What NASCAR needs??? 3 laps out of 500 hardly make a real short track race. It’s simple. Plain boring for 497 laps. Announcers talking up the boredom doesn’t fly. Take a nap for the first 95% of a race. You might actually see some personality at the end. Maybe. Pathetic racing compared to 20+ years ago. ’79 Daytona made NASCAR, and they’ve turned it into a joke.

Have t agree with you. Week after week we see “John Doe wins wild Acme 500!” and it is as you say 3 interesting laps at the end of 4 hours of dull. People aren’t going to consistently watch that. And once they realize there is more exciting stuff out there good luck getting them back.
If they can change this now wouldn’t be too early to start.

You’d have to change a lot. Get rid of ‘stages’, which might make sense as Heats at a local quarter mile track. Chase, or playoffs, or whatever the hell the call it now, is a joke. What was wrong with the old way? I’m guessing Truex would end up being the Champion this year. He deserves it, even though I’m not a Toyotoy fan. Personalities? Don’t have many. Kyle is one, even though I can’t stand him. That’s what it’s all about. Hopefully, next year with Chase, Ryan and Bubba, we’ll see something besides stone personalities. Who knows. I hope Petty and Woods allow their drivers to bump and bang. Nobody else wants to. I give a thumbs up to Hamlin for making his way. Oh yeah, get rid of the pit road ‘speed limit. How many years (60 or so?) did they race without it? IROC cars are a different story. Guess this guy will need to write another article?