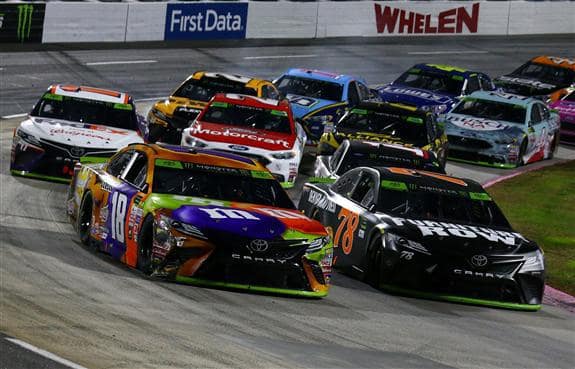 Monster Energy NASCAR Cup Series: The Power of Lights: Something about that Sun seemed to keep the drivers at bay Sunday at Martinsville Speedway.

When she decided to make her daily disappearing act for the night, things changed in a big hurry on track.

Around lap 300, the speedway flicked on the new once-used LED lights to prepare for the dimming sunlight that remained. And though the race had only three non-stage cautions up until that point, the remaining 200 laps saw six cautions to end the race at night for the first time in track history for the Monster Energy NASCAR Cup Series.

But this seemed different. Seeing nearly every driver in the top five rub, bump, rear-end and eventually — in Denny Hamlin‘s case — dump in the final laps, there was a sense of all-out racing brewing hotter and hotter in the cold Virginia air.

Indeed, the moment of the race occurred with three laps to go when race leader and fan-favorite Chase Elliott spun off the front bumper of Hamlin. From then on, it was a duel among Kyle Busch, Martin Truex Jr., Hamlin and Clint Bowyer to decide the victor.

The sight of give-and-take racing turned to grab-and-steal seemingly as soon as the lights went out. Elliott and Hamlin traded paint and words, while Kevin Harvick perhaps had the most truthful quote of the night, perhaps quote of the year:

Camping World Truck Series: Two to Go to Set the Championship 4 – When the checkered flag flew over the Truck Series at Martinsville Speedway, Noah Gragson emerged with his first career win, following an impressive restart from the outside lane. But more importantly, the driver of the No. 18 Toyota isn’t a playoff driver, meaning no one is safe heading into Texas Motor Speedway next weekend for the second race in the Round of 6.

Obviously, John Hunter Nemechek finds himself in a deep hole – 28 points to be exact – after an early wreck on Saturday. While he can point his way in, it’s highly likely the sentimental favorite in this year’s title race will need a victory if he’s going to have a chance to race for the championship at Homestead. Meanwhile, Christopher Bell, despite a challenging day at Martinsville, currently holds a  45-point advantage over the cut line heading into Texas, a track he won at earlier this season.

The bottom line is there are two races remaining to set the Championship 4, and with no one locked in, anything can still happen. We all remember what happened to dominant driver William Byron last year. I’m not saying the same will happen to his former teammate Bell, but nothing is guaranteed, especially this late in the season. – Beth Lunkenheimer

Formula 1: Max Verstappen Victorious; Lewis Hamilton Clinches – Max Verstappen started from the second spot, pipped pole winner Sebastian Vettel in the first turn, and cruised to his second win of the year.  Valtteri Bottas enjoyed favorable conditions from the start and took second, with Kimi Raikkonen crossing the line in third.  Those results paled in contrast to Lewis Hamilton clinching his fourth championship.

The big story, of course, was whether or not Hamilton would earn the driver’s title, as Vettel needed to place first or second to continue the fight.  The first laps indicated it might be a bit of a struggle for both.

The opening featured interesting contact, as Verstappen moved ahead of Vettel, Vettel clipped him, and then did the same to Hamilton who was challenging on the outside.  The contact caused Vettel to make a stop for a new front wing, while Hamilton limped around the track with a punctured tire before rejoining the race.

Vettel was able to move more easily through the standings as he never lost contact with the field, whereas Hamilton found himself so far back that just catching up was a marvel.  Vettel wound up in fourth while Hamilton placed ninth, closing the title.

Daniel Ricciardo, who was trying out the upgraded Tag Heuer (Renault) powerplant only to see it fail on lap 7, foreshadowed a rough day for Renault.  It was an unfortunate occurrence for a driver who was moving swiftly through the field, and whether the altitude played a part is something that has seemed to concern Renault engines all weekend. Toro Rosso’s Pierre Gasly and Brendon Hartley both found trouble with their engines throughout the weekend and retired during the race, and Renault’s Nico Hulkenberg and Carlos Sainz also retired with engine issues.

Those at the track all stood at lap 19 and raised their fists in a sign of solidarity for the earthquake that rocked the area on Sept 19. earlier this year.  The region is still suffering through the after-effects and that the race happened at all is somewhat of a surprise.

The penultimate race of the F1 season will be in two weeks, November 12, in Brazil for the Brazilian Grand Prix. – Huston Ladner

Sports Cars: Driver Changes Continue for 2018 – Last week, there were a number of announcements pertaining to driver lineups for the 2018 IMSA WeatherTech SportsCar Championship.  Most notably, United Autosports announced Fernando Alonso’s participation in the Rolex 24 at Daytona.

Another theme of those announcements was the shifting of Acura’s factory racers.  For example, Magnus Racing announced last week that Andy Lally will be returning to the team for 2018.  Where they’ll be racing is still unofficial at the moment.

Another driver that won’t be back with the Michael Shank Racing with Curb-Agajanian operation in 2018 is Jeff Segal.  Last week, Scuderia Corsa announced that Segal, who shared the No. 86 Acura with Oswaldo Negri Jr. this year, will rejoin the team for the Tequila Patron North American Endurance Cup races alongside regular drivers Alessandro Balzan and Cooper MacNeil.  For Segal, this will be his second stint with the Van Nuys, Calif.-based Ferrari squad.  The Miami native ran part-time for the team in 2015 and 2016.

Why the moves? IMSA rules generally don’t allow factory programs in GT Daytona, which Michael Shank Racing with Curb-Agajanian effectively was this season.  IMSA gave special dispensation to the team (and 3GT Racing for Lexus) to run with factory backing for one year.  From here on in, those teams can continue in GT Daytona as long as they are customer teams.  Of course, that would require some more outside backing.  There have been no announcements about 2018 from either team as of yet.  They both plan to race next season.  – Phil Allaway

NHRA: Lady Luck Smiles in Vegas – It was either Lady Luck, or just hard work paying off as Top Fuel crowned another first-time winner in Terry McMillen, who took home his first Wally at the NHRA Toyota Nationals.

McMillen faced off against Brittany Force in the final and made a pass of 3.870 seconds, 253.99 mph to score the win over Force. He is now the 104th different winner in Top Fuel. He also beat Richie Crampton, Clay Millican, and Shawn Langdon on his way to the finals.

“This is the stuff you dream of as a small kid,” McMillen said. “To have that opportunity to go out there and get that win is truly an amazing feeling. Hats off to my crew. This is the first time in a long time where the turn arounds were really quick, and they turned around that car flawlessly. The car was really quick on the starting line, lights were good and it all just fell into place.”

Pro Stock came down to a battle of the KB Racing teammates with Greg Anderson paired up against Bo Butner. The victory went to Anderson with a run of 6.698 seconds, 204.70 mph. Butner experienced mechanical problems and had to lift.

Anderson also beat Alan Prusiensky, Chris McGaha, and teammate Jason Line in earlier rounds. This was Anderson’s 90th Pro Stock win, second in the class to Warren Johnson who has 97.

Points leader Eddie Krawiec continues to power himself away from the field in Pro Stock Motorcycle. Krawiec once again found himself in the final, this time up against Hector Arana Jr. Krawiec ran 6.924 seconds at 193.16 to beat Arana’s 6.949 seconds at 192.91 mph and increase his lead in class points to 150 over LE Tonglet with just one race remaining.

I thought Martinsville was a great race. There was a lot of drama throughout the race. A lot of side by side racing, clean passes etc. unfortunately NBC stunk up the show as usual. I hate to see lead changes in replay because they leave good racing action to show high lites from qualifying or previous racing. I mean how many times do we have to see Johnson spin during qualifying? They ignored the Harvick-Johnson situation for points for the fourth Homestead spot for the championship. Since I don’t cheer any Chevy driver and am not a Harvick fan I did find it compelling to know who was beating who in that battle. I’m just not that keen on Johnson winning his eight championship. I would be if he drove a Ford or Toyota. Johnson is a likable guy.

As for the Hamlin-Elliott deal Denny was obviously wrong. Chase I thought deserved to win the race he ran strong throughout the race. I have no idea what Brad had on his mind to choose the outside lane on the restart. Chase did exactly what I would have done chasing him m up the track, pun intended, to get the lead. I am fast getting tired of the media trying to have Elliott taking Junior’s place as the most favorite. In addition I think it is total non-sense to believe that Hamlin is truly sorry for his actions. This apology BS is exactly that BS. I don’t want to see this “kiss and make up crap”. I’m sure the 24 Team sees it my way.

What did the crew chief for the 22 Team have on his mind? That was one hellava tire rub. He cost his team mate a sure win and a guarantee in the Homestead final. Any fool could have seen that the tire was not going to make it to the end. The 22 had nothing in the fight anyway.

No matter the case Kyle Busch is without a doubt the most exciting racer up there. Only he would try to make it three wide going into a turn at a short track. I don’t care for him personally but he is a racer from the get go. And you have to appreciate that.

Hamilton and Mercedes got the championship the old fashioned way. They outdeveloped Ferrari as the year went on. Something that was apparent after the mid summer break. And while he may not be the most lovable driver, Hamilton is the best driver. Combine the best driver and the best car you have a winner.
That said there is a lot of talent in F1 cockpits now. Far more talent than cars which can showcase it. A pretty good first season for Liberty and the start of the post Bernie era. Lets hope they dont screw it up.