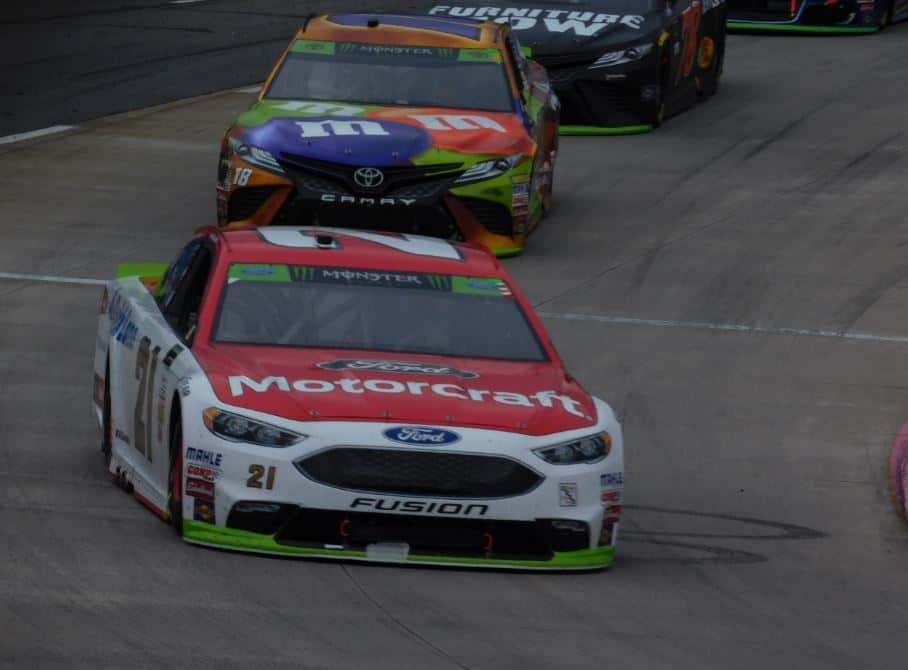 His best friend, Darrell Wallace Jr., said earlier in the week that Ryan Blaney used to hate racing at Martinsville Speedway. After seeing the carnage and tempers that Blaney survived en route to an eighth-place finish in the First Data 500 on Sunday, it’s easy to see why.

The race weekend started with good times for Blaney. With Martinsville being Wood Brothers Racing’s home track, the team held a Fan Appreciation event two days before the race. The second-year driver entered the weekend as the feel good story of the playoffs and the NBC analysts said that he was “playing with house money” as the team made it into the Round of 8, and further than anyone expected.

Blaney was even paid one of the greatest compliments of his career when Eddie Wood compared his driving style last week at Kansas Speedway to Hall of Fame driver David Pearson.

The first half of the race unfolded favorably for Blaney as well, as he started the race in fourth and scored points in both stages.

The track appeared to change as the sun went down and Blaney’s car went away from him.

“We were pretty decent early on in the day,” Blaney said. “When it got really cold at night time, our car swung, not in a good way…After that, we lost speed and it was really tough. Then, we were on defense.”

As part of his defense, Blaney held the bottom lane as 2014 series champion Kevin Harvick pounded his bumper several times in homestretch of the race. Harvick hit Blaney harder each time, and when Harvick finally moved to the inside of Blaney, the Wood Brothers’ driver slammed down into the No. 4 car.

Harvick approached Blaney after the race and the two appeared to have a heated conversation.

Blaney said that he and Harvick were just talking about their race.

“It’s Martinsville,” Blaney said. “People were trying to go. You saw the end of it.”

Coming to the checkered flag, the most of the field was involved in a wreck. A severely damaged No. 21 car spun across the finish-line for his first career Martinsville top 10.

“It was something special. It was a lot of people running into each other and a lot of chaos,” Blaney said. “I’m pretty glad [Martinsville] is out of the way.”

Blaney enters next week race at Texas Motor Speedway six points out of fourth place. He won both stages in the spring race at Texas before finishing 12th.

“After seeing the carnage and tempers that Blaney survived en route to an eighth-place finish in the First Data 500 on Sunday.”

What????? Maybe finish the thought?

It is easy to see why Ryan Blaney hates racing at Martinsville Speedway. Thought finished