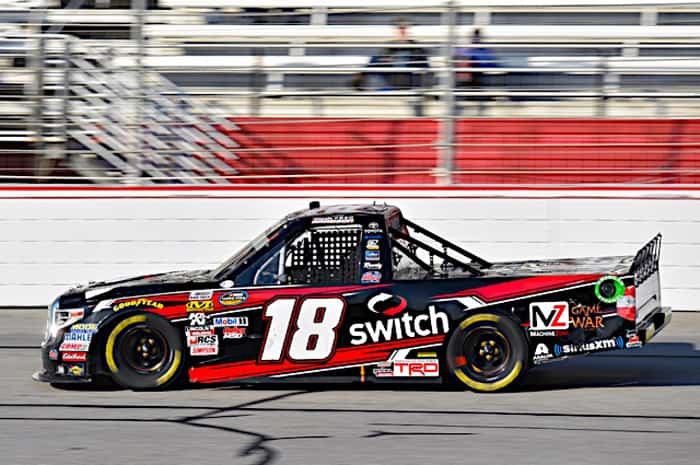 While Noah Gragson was winning the Texas Roadhouse 200 at Martinsville Speedway, two part-time rookie teammates were handling themselves like old pros.  Harrison Burton, making just his sixth Truck Series start of 2017 and the seventh of his career and Todd Gilliland in his fifth career start, finished fourth and fifth, respectively on Saturday. The youngsters also finished 1-2 in points in the K&N Pro Series East this year with Burton, who was 16 when that season ended, edging the 17-year-old Gilliland for the title.  Along with Gragson, who turned 19 this summer, the pair could well be the face of the series within a couple of years.  Take any two of this trio and add their ages together and they’re still younger than either of the other drivers with top-five runs Saturday.  The future is now, race fans.

What… would it take for John Hunter Nemechek to make the Championship 4 after his crash?

Let’s be realistic: Nemechek is unlikely to advance without a win barring catastrophe for several competitors.  Counting on that would be foolish, but the good news is that one of the tracks left in the Round of 6 is Phoenix, where he has a ninth-place average with three top 10s and a top five in four races at the one-miler, so he’s for sure got a chance to compete for the win.

It helps – a little – that a playoff driver did not win this weekend as it means at least two drivers will make it in on points, but it’ll still take a couple of early exits for Nemechek to be in contention.  Phoenix is his best bet, and you can bet he’s already got it circled on his calendar.

Where… do we go from here?

Next week, all three of NASCAR’s national touring divisions take on Texas Motor Speedway, Martinsville’s polar opposite in many ways.  Texas bills itself as the Wild Asphalt Circus; Martinsville needs no such false hype.  This week’s race featured driver skill and finesse along with pit strategy, and the teams with the best combination of those things are the ones in contention at the end.  At Texas, it will be all about the cars.  Aerodynamics and horsepower will be kings of the road, so look for a different style of racing altogether. Christopher Bell won the spring race for the second of his five victories in 2017, so look at Bell to be the favorite this time around as he tries to be the first to clinch a spot in the top four at Homestead.

When… did it all begin?

Martinsville is the oldest track on the NASCAR circuit, predating NASCAR itself by a year. The Truck Series has raced at the half-mile gem since its inception in 1995.  The first winner was Joe Ruttman in the No. 84 Ford of owner Mark Simo. Johnny Sauter leads active CWTS drivers with three wins at Martinsville, tied for the all-time number with Mike Skinner, Kevin Harvick and Dennis Setzer. Matt Crafton has raced 32 times at the track, more than any other driver. Jack Sprague holds the pole record with four in his 17 lifetime series starts. Martinsville and other short tracks like it are what the series was originally built for: trucks with less aerodynamic dependence than their car counterparts using bumpers and bravery to make passes and win races.

Why… did Gragson win the race?

By all rights, he shouldn’t have.  Gragson was in second for the final restart, on the outside in the groove that’s so often squashed hopes at Martinsville.  It looked as though if anyone might challenge a dominant Crafton, it would be Sauter from third, right behind Crafton on the final restart with 10 laps to go.  But the inside groove had more rubber on it than Crafton bargained for, and his No. 88 truck couldn’t get going in time to outduel Gragson on the start. Once the teenager had an advantage, that was all she wrote.  Crafton said afterward if he had it to do all over again, he’d have picked the outside, but it was too late for a do-over and Gragson’s first trophy is the most sought-after in NASCAR.

How… does the championship picture shake out with three races to go?

The title race at Homestead is anybody’s game, but in order to contend for the championship, four teams have to get there of the six still in the picture.

Bell struggled uncharacteristically this weekend, even before the spin that ended his hopes of winning. Bell had his second-worst starting position of 2017 in 15th, but he finished eighth.  That’s pretty solid for a driver who qualified poorly and got turned around to boot. He leaves as the point leader thanks to the playoff points he’s accumulated so far and is heading to a track where he’s the most recent winner. Title favorite, anyone?

Sauter also carries a lot of playoff points, and that keeps him in second.  Just three points behind Bell headed to Texas, Sauter is a driver to never bet against, because he will do everything within his power to scrap for every point.

Crafton made a statement at Martinsville, leading more than half of the race on Saturday. Crafton hasn’t been strong enough to really be considered for a title, but he’s one of the best to make his career in the CWTS. So it’s foolish to count him out, especially as he leaves Martinsville third in points. Crafton’s weakness could be his lack of playoff points if he has trouble in the next two weeks. Realistically, the top three are the strongest competitors in the title hunt; look for them in the top four entering Homestead and ultimately deciding the champion.

Ben Rhodes leaves the paperclip fourth in points, in position to take the final spot at Homestead.  Austin Cindric has an 11-point deficit to erase in the next two weeks, which is doable, especially if Rhodes should stumble just a little.  Nemechek, who entered the playoffs as a sentimental favorite because his team operates on a tight budget, has a bigger hill to climb, and will likely need a win to move on.